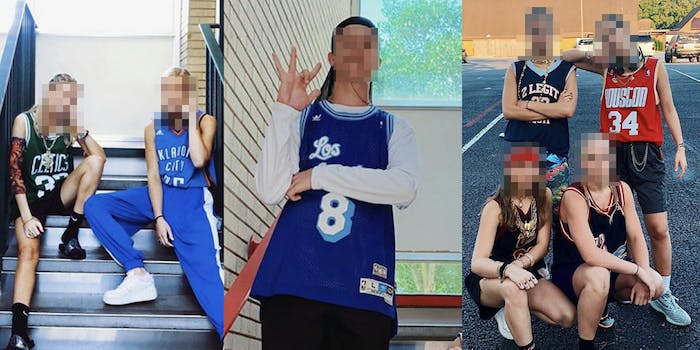 White students thought it was totally fine to wear cornrows and fake tattoos for a spirit week celebration.

A Texas high school has come under fire for hosting a “Thug Day,” where white students took that to mean dressing in cornrows, chains, jerseys, and fake tattoos, aka things Black students often get punished for.

At least 30 students went to school on Tuesday in such attire, which was part of spirit week at Memorial High School (MHS) in Houston, according to KHOU11. The week is supposed to celebrate rising juniors ahead of finals by maintaining different themes each day, such as “Hippie, Jersey, 2000s, USA/America, Hawaiian,” the latter two of which also sound problematic.

On Tuesday, user @Rachellemmma shared photos of students appropriating Black culture under the offensive guise of “thug” in a tweet that went viral.

“Black kids get kicked out of school for the day until they take out their braids or take off their durags or sometimes suspended,” responded one user. “But suddenly when white kids do it it’s fine. Hmmm seems white. Cultural appropriation at its finest.”

Other people felt the hypocrisy as well:

So their idea of “thug” day was to wear the jerseys of famous athletes and hairstyles that people of color wear on a daily basis 🧐 Headphones and chains .. So .. let me get this straight.. they can get praised for imitating us at the same time we’re getting killed for it? Crazy

According to statements from MHS, this particular day had not been approved by school officials. Students reportedly changed “jersey day” to “thug day,” according to Heavy.com.

A former student told KHOU11 that the day used to be a “senior swag day,” and the school even had a “senoritas” day to celebrate Mexican culture. But that reportedly prompted some people to dress up as border patrol or, in trying to “act Mexican,” some would ask to mow people’s lawns.

After the backlash, MHS said in a statement that the remainder of spirit week was canceled. “While the majority of rising juniors followed the approved dress theme on Tuesday, any instance of an inappropriate or offensive dress violation will not be tolerated,” offiials said, according to KHOU11. “Students found to be in violation of the Student Code of Conduct and dress code will be given a consequence.”

MHS’s population is more than 60% white, with Hispanic students making up the second largest population at 19%.