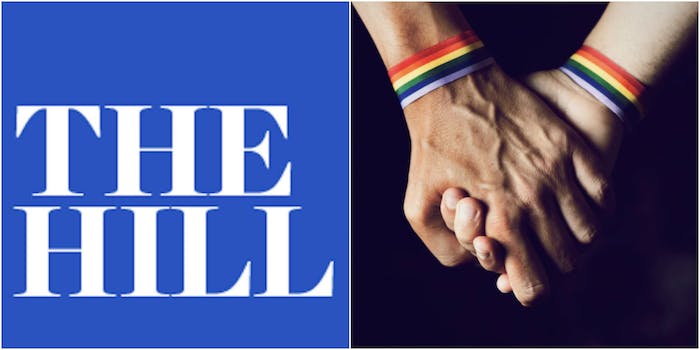 Why is political blog the Hill publishing op-eds by anti-LGBTQ hate groups?

Look closely and you'll find the Hill has a history of giving space to dangerous rhetoric.

Daylight Saving Time has nothing on the Equality Act, at least according to one conservative writer.

After the federal LGBTQ non-discrimination bill was reintroduced in Congress last week, Kristen Waggoner—a guest columnist for the Hill—warned that its passage would “turn the clock back on women” by extending trans women the same rights as other women.

“If gender-identity ideology becomes the law of the land, women in all walks of life will suffer the consequences of the blatantly sexist notion that a man who adopts stereotypical feminine roles, behaviors, or clothing must be treated in all respects as a woman,” Waggoner claimed in a Saturday op-ed.

The Equality Act, which Waggoner called “bad news for everyone,” would update the Civil Rights Act of 1964 and the Fair Housing Act of 1968 to ban discrimination on the basis of sexual orientation and gender identity in several key areas, such as: employment, housing, education, and public accommodations like locker rooms at community pools or rest-stop bathrooms. Waggoner argued that federal laws that allow transgender people to use the restroom or facility that aligns with their gender identity would strip away the “privacy rights and safety” of women and girls by permitting access to “intruding males.”

It didn’t take long after the opinion piece went live for critics to note that it parroted classic transphobic and Trans-Exclusionary Radical Feminist (TERF) rhetoric and widely debunked talking points from right-wing lobbyists.

Victoria Darling, a trans and disabled writer and activist, called the article “veiled hate speech” in a Sunday tweet. Greg Harris, the openly gay majority leader in the Illinois House, claimed Waggoner’s treatise employed “every dog-whistle, scare tactic, and divide-and-conquer trick you can think of.”

“Why do equality and equity scare some people so badly?” Harris tweeted.

Here's an anti-LGBT hate groups attack on #EqualityAct that simply bans discriminating against LGBT people. Check it out. Every dog-whistle, scare tactic and divide-and-conquer trick you can think of. Why do equality and equity scare some people so badly?https://t.co/lcmR0EAd4R

But if the Hill’s op-ed reads like something that might run on the late Westboro minister Fred Phelps’ Xanga page, that’s because it was, in fact, authored by an anti-LGBTQ group. Waggoner is the senior vice president of U.S. legal division and communications for Alliance Defending Freedom, which is more commonly referred to by the three-letter acronym ADF.

For the past 25 years, ADF has been one of the most active and ubiquitous opponents of LGBTQ rights in the U.S. and abroad. The Scottsdale, Arizona-based organization authored bans on same-sex marriage in Colorado, Idaho, and South Carolina between 2005 and 2006. More recently, it has drafted anti-trans legislation introduced in more than a dozen U.S. states, as well as a Mississippi law allowing individuals to refuse service to LGBTQ people on the basis of faith.

In a statement to the Daily Dot, media watchdog GLAAD expressed disappointment that the Hill would give a platform to a group devoted to opposing rights and protections for LGBTQ people, calling the op-ed’s publication “dangerous.”

“Hate groups like the ADF gain their ‘credibility’ when news outlets share their works of fiction to an audience expecting to read about the latest news coming from Congress,” Drew Anderson, GLAAD’s director of campaigns and rapid response, said in an email.

Anderson predicted there would be “long-term consequences against LGBTQ Americans stemming from this ill-thought decision, including the ADF using their opinion piece as credible citation for an anti-LGBTQ campaign.”

However, ADF has been using the Hill to boost its credibility for years. Waggoner’s op-ed on the Equality Act is actually the third she’s written for the influential politics blog—which counts 4 million followers between Twitter and Facebook—since December 2018. Previous contributions include hot takes on abortion and religion.

What’s more, is that Waggoner isn’t the first ADF employee to have written for the Hill. She’s the fourth. The website has also published her colleagues James Gottry, Tyson Langhofer, and Matt Sharp, all of whom serve as counsel for the organization. They collectively wrote in to defend bills allowing adoption and foster care agencies to turn away same-sex couples and to vilify LGBTQ-inclusive nondiscrimination laws as a “crusade” against Christians.

The MVP of the group is Gottry, who has authored at least five pieces for the Hill. Nearly every single one of those op-eds is devoted to defending Jack Phillips, the Masterpiece Cakeshop baker whose case was heard by the U.S. Supreme Court last year. Phillips claimed his First Amendment rights to “free expression” permit him to refuse to make a cake for a gay wedding.

However, Gottry’s posts neglect to mention that ADF represented Phillips in that case. In fact, none of the nearly dozen pieces authored by the organization’s employees mention they have a rooting interest in opposing LGBTQ rights.

When the Daily Dot reached out to the Hill for clarification as to why the website repeatedly gave a microphone to an organization classified as a “hate group” by the Southern Poverty Law Center, the outlet did not return our request for comment. It should be noted that opinion editor Frank L. Craig did not tweet Waggoner’s piece after it went live, despite posting three other op-eds on his personal Twitter account the same day.

It’s not that the Hill can say it was unaware of ADF’s political leanings. Just weeks ago, the publication directly quoted the SPLC’s definition of ADF in a report about the Arizona Department of Transportation (ADOT) funding ADF through license plate sales: “The Alliance Defending Freedom is a legal advocacy and training group that has supported the recriminalization of homosexuality in the U.S. and criminalization abroad; has defended state-sanctioned sterilization of trans people abroad; has linked homosexuality to pedophilia and claims that a ‘homosexual agenda’ will destroy Christianity and society,” the SPLC says of ADF on its website.

That description that was reprinted on the Hill in its entirety.

But the Hill has never been shy about publishing anti-LGBTQ lobbyists. The site has likewise given a platform to Family Research Council President Tony Perkins, a key advisor on Trump’s trans military ban; National Organization for Marriage President Brian Brown, who fought to overturn same-sex marriage in California and Taiwan; and Focus on the Family President Jim Daly, whose organization has long promoted anti-gay “conversion therapy.”

Although Focus on the Family is not an SPLC-designated hate group, the other two are. Family Research Council has likened transgender people to pedophiles and rapists and claimed the most effective way to stop LGBTQ youth from taking their own lives is to force them to be straight and cisgender. National Organization for Marriage has compared same-sex unions to prostitution and polygamy.

Brown is the only NOM representative to pen an op-ed for the Hill, but four FRC employees have written for the site: senior legislative assistant Mary Beth Waddell, senior fellow Cathy Ruse, and Center for Religious Liberty director Travis Weber.

The Hill’s connections to the far-right go deeper than just the who’s who of conservative extremists-turned-columnists. Jimmy Finkelstein, who assumed ownership of the publication from his late father, Jerry, counts President Trump as a close friend. In a 2011 story published by the New York Observer, the younger Finkelstein said of Trump: “I’ve known him forever.” When Michelle Wolf delivered a blistering indictment of the current administration at the 2017 White House Correspondents Dinner, Finkelstein threatened that his publication would no longer attend the function without “major reforms.”

Those biases matter. While the Hill might appear to be a relatively niche Beltway blog, its print version has been the most widely read publication on Capitol Hill since it was first founded in 1994. During the 2016 election, the MIT Media Lab ranked the news organization as one of the “top 150 influencers” informing public opinion.

However, the Hill isn’t solely a mouthpiece for the GOP. In the past, it has published a handful of op-eds from progressive groups like People for the American Way, Southern Poverty Law Center, and Human Rights Campaign. HRC Former President Chad Griffin wrote a column last year warning legislators opposed to LGBTQ rights that advocacy for equality “will come for [them] on Election Day.”

Rea Carey, Mara Keisling, and Kate Kendell, the respective executive directors of the National LGBTQ Task Force, National Center for Transgender Equality, and National Center for Lesbian Rights, shared a byline on an op-ed back in 2016. Carey has contributed nearly a dozen op-eds to the blog.

But LGBTQ advocates say that even if the Hill believes it’s giving “equal time” to conservatives, the website is setting a “dangerous” precedent by giving anti-equality organizations repeated opportunities to promote their ideology without fully disclosing the source of the rhetoric. Joanna Hoffman, communications senior manager for Athlete Ally, said lives are at stake.

“Publishing an op-ed from the perspective of a group that wishes to criminalize a segment of our population simply for who they are and who they love without disclosing their status as an extremist group not only indicates a lack of transparency,” Hoffman said in an email to the Daily Dot. “It also dangerously perpetuates misconceptions that lead to further marginalization, discrimination, and violence against LGBTQ people.”

Editor’s note: The headline has been changed for clarity.