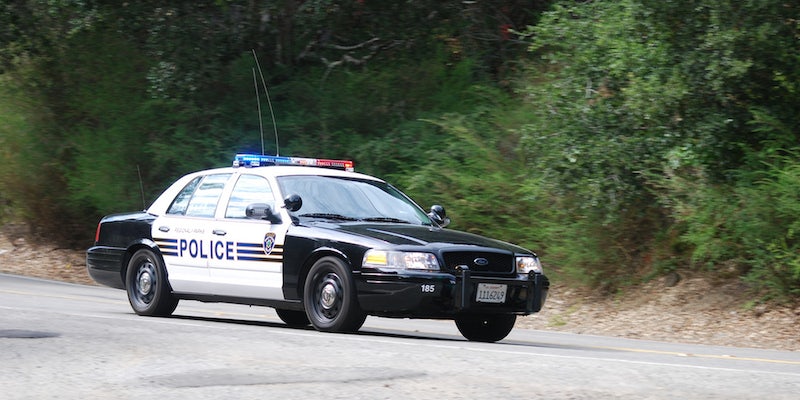 One thing you can say about 2014: it’s been a bad year to wear a badge. People around the world are fed up with abusive, militarized police—as a new memo to St. Louis police about a class designed to help officers “win the media” after shooting someone makes perfectly clear.

Public ire spilled over once again yesterday, with the 17th annual “Thank a Police Officer Day” going about as well as the #MyNYPD hashtag campaign did back in April. The observance, conceived and promoted under the banner of lawyer Andrew M. Hale’s Whole Truth Project, is meant to further that group’s aim of combating negative assumptions about cops.

Instead, social media users took the opportunity to reinforce those unflattering stereotypes.

It’s #ThankAPoliceOfficerDay, if you’re in LA come to the #LAPD protest at 3pm today 65th and Broadway pic.twitter.com/OeSkwwk47e

#ThankAPoliceOfficerDay thank you for confirming my worst suspicions about you on a weekly basis.

All violence against any woman is wrong regardless of your profession pic.twitter.com/cZKvThsQ4Z #ThankAPoliceOfficerDay Via @drama_deedee

For the even handed Justice meted out by an intelligent, evolved & enlightened constabulary. #ThankAPoliceOfficerDay pic.twitter.com/hBwxiN3ETb

It hasn’t gone unnoticed that you harass & interrogate my black friends when they visit my “white” neighborhood. #ThankAPoliceOfficerDay

Is this what we should be thankful for? #ThankAPoliceOfficerDay pic.twitter.com/3cJcp4GMcz

Let’s all be white police officers so we can murder civilians & get paid vacations #ThankAPoliceOfficerDay #Ferguson pic.twitter.com/hZXK2Oie3b

Today is #thankacopday! So #thankapoliceofficer in #Ottawa for driving drunk, not getting charged and getting off. https://t.co/FkLRtHLvmV

The homies back in Mexico taking part in #ThankAPoliceOfficerDay. Soon that shit will go worldwide. The planet, Earth pic.twitter.com/FsnBgbCctI

For more than 1496 deaths in British police custody since 1990>> https://t.co/SNmHjlhBv0 #ThankAPoliceOfficerDay

Funny how this sort of thing never happens on Administrative Professionals’ Day.