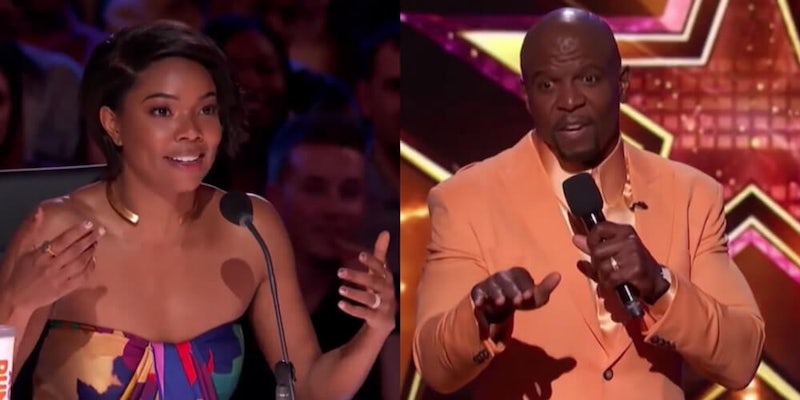 The Black community's disregard for Black women, our experiences, and our advocacy has a long-established and very complex history.

Terry Crews is drawing ire after failing to support Gabrielle Union in her ongoing dispute with America’s Got Talent after she alleged she faced sexism and racism during her tenure as a judge on the show. Reports revealed that Union’s contract was not renewed because she reported a racist joke to producers and was told her hairstyles were “too Black.”

However, Crews, who hosts the show, publicly denied having any problems with diversity or racism on AGT.

“I can’t speak for sexism … but I can speak on any racism comments,” Crews said during a Today Show interview when asked about the alleged toxic environment at AGT. “That was never my experience.”

Crews argued AGT was “the most diverse place” he has ever worked at in his career as an entertainer and went on to say that he did not believe the allegations because they were reported by an anonymous source and not Union herself. He also tried to use his wife to shield him from potential criticism.

“I believe you should listen to women, you should always believe women,” Crews said, before explaining he asked his wife what he should do in the midst of the controversy. She recommended he say nothing.

“Gabrielle Union has not made any statement to this day,” he argued, acknowledging that he had yet to speak directly to the actress.

Backlash ensued immediately, with many calling out Crews for failing to stand with Union in a crucial moment.

“Beyond disappointing. Terry Crews could have spoken to his experience without going overboard to discredit @itsgabrielleu. BTW, I didn’t have to know Terry Crews or see what happened to him to support him. Sadly, black women are used to this,” Atlantic writer Jemele Hill tweeted.

Beyond disappointing. Terry Crews could have spoken to his experience without going overboard to discredit @itsgabrielleu. BTW, I didn’t have to know Terry Crews or see what happened to him to support him. Sadly, black women are used to this. https://t.co/2uuQ4Yr6oG

In response to a fan, Union indirectly addressed Crews’ comments, reminding everyone she stood by Crews during his sexual assault allegations.

“Truth telling, wanting change & having MULTIPLE witnesses who bravely came forward to let EVERYONE know I didn’t lie or exaggerate, really exposes those who enthusiastically will throw you under the bus, forgetting quickly who stepped up 4 THEIR truth,” she wrote.

Then, she posted a series of tweets that made it very, very clear she believes AGT has a diversity issue that must be addressed.

Let's also talk about where the diversity is in the hair & makeup dept for contestants that DOES NOT reflect all that diversity that hits the stage. Let's Google the exec's that run the show & ask follow up ?? about THAT egregious lack of diversity. Let's discuss the facts https://t.co/w40qrBDac1

Crews responded to criticism he received by saying he doesn’t have to please any woman other than his wife–not even his daughters because their partners will “take care of them.”

“There is only one woman one earth I have to please. Her name is Rebecca. Not my mother, my sister, my daughters or co-workers. I will let their husbands/ boyfriends/ partners take care of them. Rebecca gives me WINGS,” he wrote in a tweet that has been heavily meme’d.

Many, especially Black women, were even further angered by the actor’s tweet.

“As a fan, survivor & someone who’s had the opportunity to work with you, this hurts. a lot. i hope you’re able to take time away from twitter to fully understand why this response is so unproductive. asking for solidarity during times of mistreatment isn’t asking to be ‘pleased,'” MTV host Frenchesca Ramsey tweeted.

as a fan, survivor & someone who’s had the opportunity to work with you, this hurts. a lot. i hope you’re able to take time away from twitter to fully understand why this response is so unproductive. asking for solidarity during times of mistreatment isn’t asking to be “pleased”

Matthew A. Cherry tweeted a clip of when Crews spoke out about who supported him after he made sexual assault allegations against his former agent. “How soon we forget smh,” Cherry wrote.

“Black men did not want any part of it,” Crews says in the video. “All my support came from Black women.”

How soon we forget smh pic.twitter.com/nW1rm0LA2h

Despite the outpouring of support Crews received from Black women (including Union) when he came out as a victim of sexual assault, the actor failed to reciprocate that same for support Union.

And Black women are not surprised.

The Black community’s disregard for Black women, our experiences, and our advocacy has a long-established and very complex history. Black male dominance within the Black community has rendered Black women nearly voiceless for generations. As a result, it has created a blindspot for Black men who are woefully unaware of the many forms of racist abuse Black women endure–from hair- and skin-color discrimination based on white beauty standards to hyper-sexualization and other forms of racialized, sexual violence.

For example, even though Black liberation movements (like the Civil Rights Movement) are portrayed as unified efforts between Black men and women to eradicate racism, nothing could be further from the truth. These movements were riddled with sexism, and the Black women who shared in the efforts that led to their successes often felt neglected and abused.

In the book, I May Not Get There With You: The True Martin Luther King, Jr., Michael Eric Dyson argues that sexism prevented King from forging stronger connections with political Black women who were fighting to further a woman-centered agenda. It was also well-documented that women were very oppressed in his organizations. When two women in the Student Non-Violent Coordinating Committee (SNCC) tried to draft a paper to addressed sexism in its ranks, the male members of the group laughed at and ignored them. The women remained restricted to clerical duties within the organization, while the men continued to take on prominent leadership roles.

Activist Ella Baker also fought hard to simply be heard within King’s male-dominated Southern Christian Leadership Conference (SCLC) but was never afforded equal respect. She came up against the hard reality that much of the Black community’s political power is rooted in the Black church, which perpetuates a specific brand of white patriarchy that casts women as unequal to their male counterparts and unworthy of self-governance.

That reality remains true to this day.

The absence of Black male support when Black women try to assert their autonomy and fight against sexism and racism can be seen in everything, from the low male turnout at rallies whenever Black women are victims of police brutality to the outright decrying of Black feminism as a tool of oppression of Black people. This was even made evident when Black men turned their backs on Mo’Nique Angela Hicks after she tried to sue Netflix for race and sex discrimination. The abuse, disenfranchisement, and lack of support of Black women, even within their own communities, has been a commonplace occurrence left unchecked for far too long. Gabrielle Union is not the first, nor will she be the last, Black woman left hung out to dry by Black men who see her complaints as non-issues. It is far too easy for Black men to fail to make room in their consciousness for awareness of the plight faced by Black women. That’s what they have been doing for far too long.

By taking a stand for herself–and calling out the industry on racism directed at Black women–Union challenged the deeply entrenched notion that only Black men should have a voice and be leaders. And instead of centering her experience and challenging that assumption, Crews centered his own, reinforcing his Black male dominance and authority.

Now that it should be quite clear to Crews that Union is standing firm in her allegations that she faced racism and sexism while working for AGT, he should do the exact opposite of what Black men have historically done: Stand back and support a Black woman while she takes the lead.