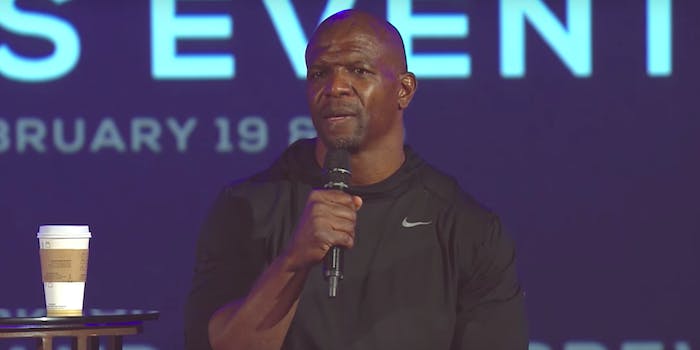 'I have no right to expect your forgiveness, but I am asking for it nonetheless.'

Terry Crews was the most visible man in Hollywood to reveal his #MeToo story, and though most people in the industry were supportive after he talked about his experience, he also received some scorn and mocking. Now, Crews has published the apology letter he received from the man who allegedly groped him in 2016.

His name is Adam Venit, and he’s a former agent at William Morris Endeavor. In an interview with Good Morning America in November, Crews said he was groped by Venit at an industry party. Crews said Venit squeezed his testicles, made tongue gestures at him, and giggled and laughed at Crews.

Venit resigned from his position earlier this month, and Crews shared Venit’s apology on Twitter.

Read in full below: pic.twitter.com/Hbe4tu7UPL

As Mashable noted, Venit was briefly suspended when Crews made accusations against him last year, but after he was allowed to return to work, Crews expressed anger about the situation on Twitter. In his legal settlement with the agency, Crews demanded that Venit be fired and not be rehired.

In Venit’s apology, he wrote, “I know that you didn’t ask for any of this. Again, I take responsibility for us being here now, together in this situation. I am sorry for all of it. … I have no right to expect your forgiveness, but I am asking for it nonetheless. I even hope that someday we can come together and go forward with compassion and understanding and be an amazing force for positivity and change in our culture. It requires me taking responsibility and understanding my behavior, and for us to start the forgiveness/healing process together.”

Venit also wrote that he had done plenty of self-reflecting and that he wants to be a better person.

As for why Crews posted the letter on social media, he told Deadline, “It meant nothing without a resignation.”