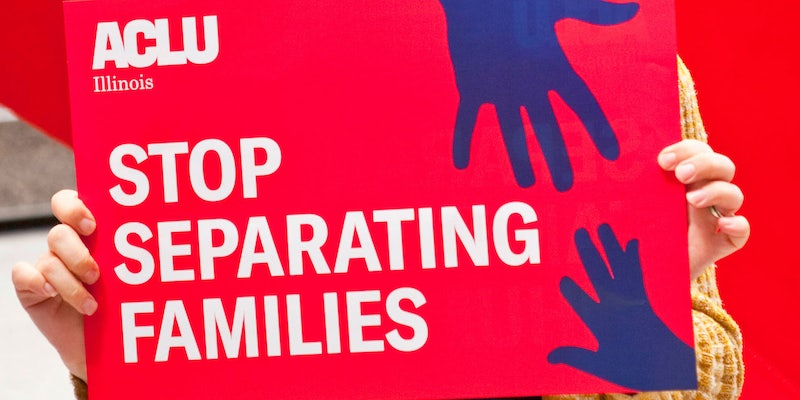 One expert described the facilities as, ‘government sanctioned child abuse.’

According to a report from the Associated Press, there are at least three “tender age” shelters in south Texas, for babies and young children who have been ripped from the parents at the U.S.-Mexico border.

Since the Trump administration announced in early May its intention to prosecute everyone who crossed the southern border, more than 2,300 children have been separated from their parents there. All these children need somewhere to go, and many are being held in so-called “tender care” facilities. Doctors and lawyers who have visited the facilities describe them as “technically safe,” though they also note that the children being kept there are not emotionally well.

The president of the American Academy of Pediatrics, Colleen Kraft, described her experience of touring the facilities in an interview with CNN, saying, “Normally, toddlers are rambunctious and running around. We had one child just screaming and crying, and the others were really silent. And this is not normal activity or brain development with these children.” She described the child detention centers as “nothing less than government-sanctioned child abuse.”

Other experts have shared stories of the trauma migrant children face when they are torn from their parents. Tara Neubrand, a pediatric emergency physician who says she has evaluated undocumented children, shared on Facebook experiences similar to those Kraft described.

“These children, in all cases, clung so tightly, and so completely, to their foster mothers, both in the ED and at home, that they were literally unable to be put down,” she wrote. “They didn’t explore the world, they were terrified that their world would be broken for a second time. Their trauma, and the direct effect it was having on their development, was obvious.”

My child separation story:I live in Denver, CO. I'm approximately 2340km from the Mexican Border, but I grew up in…

Others described the trauma of any child, especially a newborn, being taken away from their parents.

Despite claims from the Trump administration that children younger than four are not being taken from parents, reports from people touring the facilities show that this is not true, and infants as young as three months old have been forcibly taken—including those where being breastfed at the time.

Titans of industry have been speaking out against the separation policies as well, with Tim Cook, CEO of Apple saying in an interview with the Irish Times, “It’s heartbreaking to see the images and hear the sounds of the kids. Kids are the most vulnerable people in any society. I think that what’s happening is inhumane, it needs to stop.”

These stories break my heart. My grandmother was a refugee who told me the story of being briefly separated from her parents as she fled and the sheer terror of wondering if she’d ever see them again. The experience was still traumatizing as she shared it 60 years later.

The stories and images of families being separated at the border are gut-wrenching. Urging our government to work together to find a better, more humane way that is reflective of our values as a nation. #keepfamiliestogether

Ripping children from their parents’ arms is cruel. This policy must end. pic.twitter.com/R2b3FXtxqU

Celebrities have been joining the conversation as well, some sharing their own experience of life at the age that these children are being taken from their families.

I was just under two-years-old in this photo. I would cry whenever my mom left to pick up my dad from work…I couldn’t stand to be without her. I was at the age in this photo to be placed in one of the tender age camps that @maddow talked about tonight. I’m heartbroken. pic.twitter.com/xIwhZ29cmK