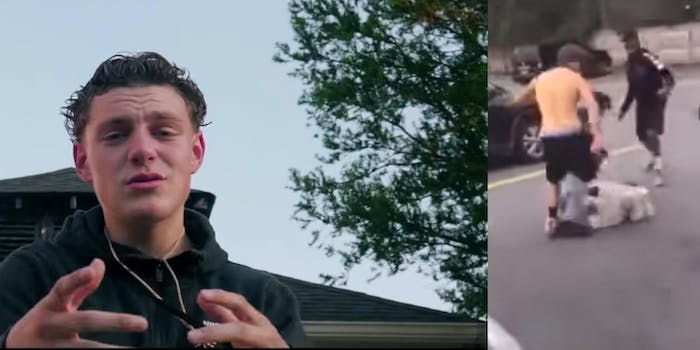 'They videoed his death instead of helping him.'

An 18-year-old boy has been charged in the murder of 16-year-old Khasseen Morris, who died in a mall fight that was filmed and shared online by other teenagers.

Tyler Flach was charged with second-degree murder and arraigned on Thursday, according to the Nassau County Police Department. Morris was stabbed in a teen brawl outside a mall in Long Island on Monday.

Another boy, a 17-year-old, was also injured in the brawl and sustained a broken arm. The two victims were taken to a local hospital, where Morris later died.

About 50 teenagers, some of whom were involved in the fight, stood by and watched the incident. Some of them recorded it and posted videos on social media, NPR reported.

The video is still viewable on YouTube channels including The Parody Reality, where the video has more than 50,000 views.

The brawl between Flach and Morris was the culmination of a “dispute going on over a young lady,” Detective Lt. Stephen Fitzpatrick said in a press conference on Tuesday. He said a group of six to seven males went after Morris in a predetermined fight between him and Flach, who were arguing over a girl.

He added that Morris came to the mall expecting a “fistfight” and that other teens intended to watch.

“You probably saw in the video kids stood here and didn’t help Khasseen, they would rather video this event,” Fitzpatrick said. He confirmed that videos were uploaded to Snapchat and other social media platforms.

why won’t the media say his fucking name ITS KHASEEN MORRIS AND IT DESERVES TO BE HEARD HE IS MORE THEN A “STABBING VICTIM” HE WAS A PERSON SAY HIS NAME, SPREAD IT LIKE WILD FIRE HE DESERVES JUSTICE

“Kids stood here and didn’t help Khaseen,” a detective said of slain teen Khaseen Morris. “They’d rather video. They videoed his death instead of helping him.”

A society that devalues human life is not a working society

We live in a world where a child is ambushed filmed DYING by dozensss of others and the murderer is planning to plead not guilty. My heart hurts for the family of Khaseen Morris