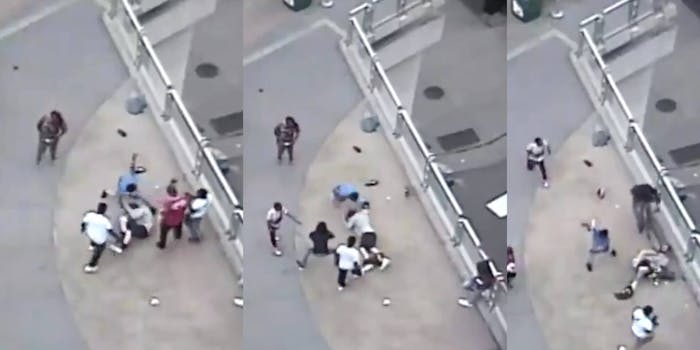 The video shows a man viciously attacked with a plant pot and run over with a bicycle.

Right-wing publications have falsely claimed that a group of Somali men violently attacked a man, feeding into anti-Somali sentiments in Minnesota, according to a report by nonprofit news site Sahan Journal.

Surveillance footage of the brutal attack, which took place Aug. 3 outside the Target Field baseball stadium in Minneapolis, Minnesota, has gone viral on social media.

The video shows a group of men in a courtyard attack a man who is sitting on the pavement, seemingly unprompted. What starts as punching and hitting at the beginning of the two-minute minute gets progressively worse. The men take turns holding the victim or jumping on his chest or kicking him. At different points, the men are seen leaving the victim alone for a few seconds before someone else attacks him. At one point, the attackers throw a plant pot at the man. Toward the end, one of the attackers is seen running over the man with a bicycle. The victim appears to be white.

On Facebook, numerous posts by anti-immigrant and anti-Islam pages have shared the video and claimed the attackers were Somali. But the Sahan Journal’s investigation revealed that none of the 18 men charged are of Somali heritage.

According to the attorney’s office, the attack took place on Aug. 3, and the assailants robbed the man and “viciously beat him and [kicked] him as they also ripped off his shoes and pants as they went through his pockets.”

Right-wing websites including the Daily Caller and the Daily Wire implied or falsely stated that the attackers were Somalis. The Daily Caller’s story from Tuesday now has a “correction” that says the attackers are not Somali. The page no longer shows the video, but the URL to the article still reads “somali-mob-attack-omar.”

The Daily Wire, while not directly identifying the attackers as Somalis, wrote at length about Somali immigrants in the community in the same news report about the attack. The article also cited a Fox News report claiming that Sen. Ilhan Omar’s district is the “terrorist recruitment capital” of the country. The Daily Wire article doesn’t state the relevance of the Somali community in the story.

Controversial game developer Ian Miles Cheong also shared the video on Twitter. He didn’t explicitly allege the attackers are Somalis, but he wrote in a follow-up tweet, “Who could have predicted that mass immigration from an uncultured backwater of a country torn to ribbons by internecine strife and endless war would spawn such behavior.” Many people responding to the tweet blamed the Somali community for the attack.

This is terrible! Ilhan Omar wants to disarm, if these are Somali’s she need to tell her ppl to behave in host countries!

A YouTube channel with 29,000 followers, RKTNN Truth News Network, reposted the video of the attack and falsely claimed the attackers were Somalis. The title of the video on the channel is “Horrifying Attack Unfolds On Man By Somali Mob In Ilhan Omar’s District” and has been viewed thousands of times.

Another YouTube channel, FORTH News, reposted the video with the title “Somali Immigrant Gang Beats and Rob an American man in Broad Daylight – Ilhan Omar’s Minnesota.” It’s been viewed a few hundred times.

This is not the only time Minnesota’s Somali community has been falsely targeted. In May, fact-checking website Snopes disputed claims that Somali teens physically attacked commuters with hammers in Minneapolis. Two Somali teens had received citations for “brandishing pipes,” but there was no physical attacks or injuries.