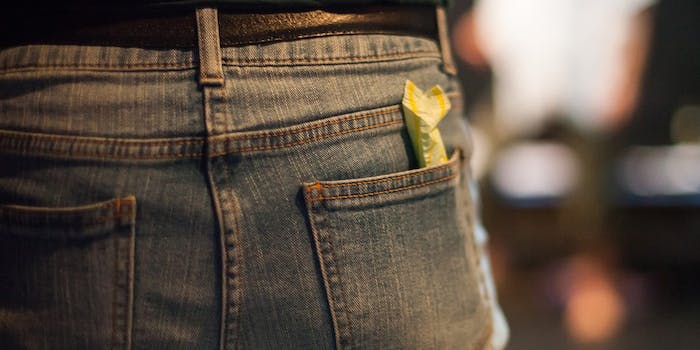 Self-proclaimed feminist Jose Garcia is trying to help society, one feminine hygiene product at a time.

Jose Garcia might just be a high school student, but he’s demonstrated an understanding of women beyond his years. The 15-year-old posted a photo to Instagram encouraging his male classmates to support their female peers by bringing pads and tampons to school. Now, he’s having a moment of internet stardom.

“It’s a craze, really. I can’t believe that something like this is happening to me. It seems like too much,” Garcia told the Daily Dot in an email, referring to all of all the attention he’s been getting on Tumblr, Twitter and Instagram. The way he sees it, he was just trying to be nice.

It all started with his original post in late March, which shows him holding up two wrapped menstrual pads along with a lengthy message and the hashtag #realmensupportwomen.

Garcia, who grew up in Havana, Cuba, and moved to Miami three years ago, witnessed firsthand the struggles of his female friends and classmates when they got their periods each month. He realized that even though he could never fully understand the experience of having a menstrual cycle, the least he could do was lend a helping hand—or a tampon, at the very least.

“My inspiration didn’t come from one source only, but just from day to day things that have happened around me, like a friend staining her pants or feeling uncomfortable to ask for a sweater to tie around their waist because their pants are stained,” he said.

He realized that a girl’s period could arrive more or less at any given moment, and that she may not have the right products on hand.

Garcia doesn’t only want to help his female friends out by lending them supplies. He also wants to end the stigma surrounding women and their periods. “I also believe that asking for a pad or a tampon shouldn’t be such a taboo thing to boys. It’s a natural thing that happens to women.”

“Asking for a pad or a tampon shouldn’t be such a taboo thing to boys. It’s a natural thing that happens to women.”

But sharing his bold message hasn’t been so easy. While his female classmates are largely appreciative of his efforts—he’s even garnered the appreciation of a handful of “fan girls”—the boys are having a harder time understanding why they should care about this particular cause.

“Most of my guy friends have just been kidding with me and teasing me for the attention that I’m getting from girls,” he said. “But guys in general are just calling me names or assuming that I’m homosexual…behind my back.”

Despite the haters, Garcia is carrying on with his mission. His Instagram post has nearly 17,000 likes, and his photo is popping up all over Tumblr. Now he plans to use this social media attention for good—and he isn’t afraid to call himself the “f” word in the process.

“I, in fact, consider myself a feminist. I believe that there should be equality for everyone regardless of their sex, gender, skin color, race, religion, etc. so it would be nice to use this attention for something positive,” Garcia told the Daily Dot.

Garcia is realistic about the fact that he may not be able to affect change on a large scale. But that isn’t going to stop him from trying.

“I realize I can’t help solve any of the big issues right now regarding women and/or men (rape, discrimination, slut shaming, unrealistic body standards, objectivism). Maybe with this hashtag I could help with other minor things,” he said.