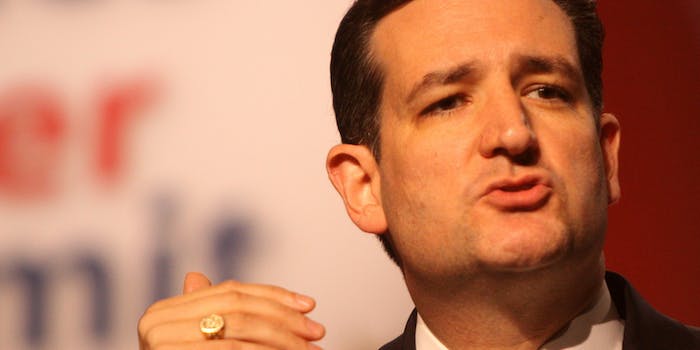 Did this grandfather threaten the Texas senator's life?

Like a lot of Americans, jail chef and Army veteran Troy Gilmore Jr. was pretty angry at Ted Cruz, the Texas senator whose grandstanding faux-filibuster on the Senate floor has been widely blamed for sparking a political crisis that brought the government to a standstill for 17 days.

On Twitter, however, Gilmore’s anger may have crossed a line. The FBI confirmed Saturday it’s working with Capitol Police to investigate  threats the grandfather and New Jersey native allegedly made against Cruz on the social media platform, ABC News reported.

“Take down Ted Cruz, at his home,” Gilmore allegedly wrote on Twitter, where he went by the handle @ArmyVet54. “What goes around comes around CRUZ!!”

That call to action was a made a little more real when he posted Cruz’s supposed home address, repeatedly. Gilmore’s account has since been deleted.

Look who no longer has a twitter account. https://t.co/oEGKzNWaFp Serves him right for posting personal info about Cruz online

The FBI told ABC News it’s already interviewed Gilmore, but didn’t reveal if his posts on Twitter indicated a credible threat against Cruz.

According to Gilmore’s LinkedIn, he currently lives in Winter Park, Florida, and he’s worked in the Department of Corrections for more than three decades. He also posted a brief biographical sketch:

I speak my mind and I do not back down from anyone you will definitely know where you stand with me as well as where I am coming from,and if that troubles people well guess what I am not going to loose any sleep over it because life is just too short to be playing the games people.