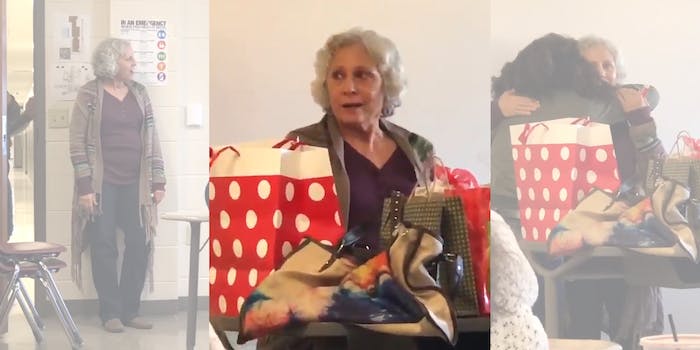 Teacher who said holidays are ‘difficult’ gets heartwarming surprise from students

When a high school teacher in Texas casually mentioned the holidays are difficult for her, her students responded by throwing her a surprise Christmas party.

Student Belinda Ramirez, 16, captured the moment her teacher walked into the class and was taken aback by the decorations, presents, and the students shouting, “Merry Christmas!”

The professor, since identified by BuzzFeed News as Professor Wharton, told the publication that her immediate family—including her parents and sister—have all passed away. (Wharton did not want her full name published due to privacy reasons.) She said she’d casually commented to the class that the holidays are a tough time for her.

“Well, I hope I did not sound pitiful,” she told BuzzFeed News, and shared that she is thankful for her “wonderful friends.”

On the last day of the semester, she was called outside the classroom by the school counselor. This was a part of the plan by the students, who then used the time to set up the celebrations.

In the video, Wharton looks surprised and emotional as the video proceeds.

One of the students is heard in the video explaining to Wharton the idea behind their surprise.

“We heard you talking about how…okay I’m kind of crying…this is like a sad time for you because you don’t have a lot of family and stuff,” the student is heard saying, “and we just wanted to make your Christmas a good one.”

“I was just completely overwhelmed by their compassion for me,” Wharton told BuzzFeed News. “Not as student-to-instructor, just as human beings.”

Ramirez’s tweet has had hundreds of responses over the past week.

It's always that one teacher that deserves this

Just wanted to say this is awesome! Well done to you and the rest of your class for blessing her!

Same especially the teacher love. Some of my teachers rly changed my whole life & I feel like their job is so thankless. But they do it anyway cuz they rly care so seein them get this kinda validation so beautiful.I'm bout to find all my old teachers now&write them thank yous😭💓

Wharton also emphasized the good-heartedness of her students, and teenagers in general, when speaking with BuzzFeed News.

“Teenagers, many, many teenagers, are so much kinder and more compassionate than their public reputation,” she said.

It’s a good reminder in a year when teens showed us how things are done—from gun control to climate change.