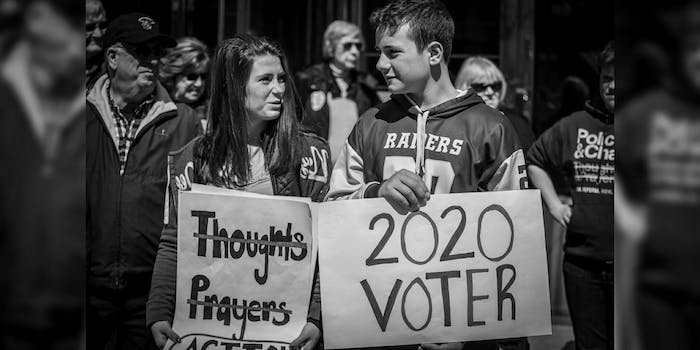 Parkland students have already effected change at the polls

Six months after their school lost 17 students and teachers in a Valentine’s Day shooting, the efforts of Parkland, Florida, students to change the state’s political landscape are being put to the test. And according to last night’s primary elections, the teenagers who reinvigorated the gun control debate are winning.

Parkland activist David Hogg, speaking to the Washington Post, said that many of the young people he knows were excited by Tallahassee mayor Andrew Gillum, who bested a former Congressman to win the Democratic nomination for governor of Florida.

And on a local level, Lori Alhadeff, whose daughter Alyssa was killed in the shooting, was elected to the Broward County School Board. Alhadeff said she was inspired by her daughter’s death to “be the voice of change.”

Hogg said that Tuesday’s results suggested that voter turnout may be shifting, particularly with the help of the elimination of a Republican-imposed ban on college campus early voting.

Across Twitter, survivors of the Parkland shooting have shared photos of their “I Voted” stickers, the first electoral efforts for many of them.

I turned 18 the day after the shooting at my school.
Today I voted for the first time. and there’s no good reason for you not to go out today and do the same. #FloridaPrimary pic.twitter.com/P9Fur3n1eZ

The young people will win. pic.twitter.com/9RnmL8VTYu

Can you believe I just got to VOTE FOR THE FIRST TIME??? #FLvotes #yourturn pic.twitter.com/Z2qLhJ7wBz

Additionally, data from Democratic firm TargetSmart published in July showed that registration rates for people under 30 “increased significantly” in swing states over the past seven months. More specifically, prior to the Parkland shooting, voters 18 to 29 years old were a part of 26 percent of new voter registrations in Florida. Since then, that number has increased nearly 8 percentage points.

“Voter turnout in Broward is running higher than the last non-presidential primary, driven by greater voter energy and enthusiasm.” (Parkland is in Broward) #FloridaPrimaries https://t.co/FYgV8sd55e

The Sun Sentinel reported that voter turnout for all three South Florida counties, including Parkland’s Broward County, was higher than in the last non-presidential primary. In Broward, voter turnout exceeded the 2014 primary by just under 11 percent. Brenda Snipes, Broward’s elections supervisor, attributed the spike to “greater voter energy and enthusiasm.”

Several other reporters tweeted similar findings in other Florida counties on Tuesday night.

Voter turnout in Miami-Dade much higher than the last time an August primary was held outside a presidential election. In 2014, turnout barely passed 14 %. As polls neared 7 p.m. closing, Miami-Dade Elections reported turnout of around 20 %. From @doug_hanks

Voter turnout (early, mail-in and election day) in Pasco County is already higher than in the 2016 primary when a little more than 18.5 percent of registered voters showed out. It's nearing 20 percent now with 5 hours till polls close. #WUSFVotes

Democrats are fired up. An absolutely historic turnout in the Florida primary:

“We as young people will win not by using hate, not by using division,” Hogg said. “It’s about campaigning and voting.”

Correction, 10:39am CT: A spelling error in this article’s on-site headline has been corrected.