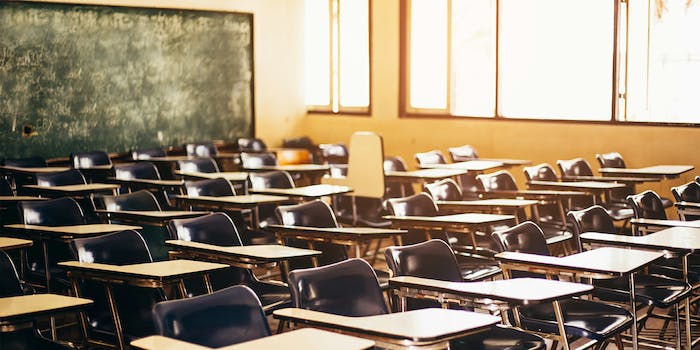 The video has sparked outrage in the New Jersey town.

A viral 25-second video of a teacher asking her students to speak “American” has sparked controversy at a New Jersey high school.

One student replies, “You’re being racist. I know how to speak English.” Three other students packed up and left class, according to PIX 11.

Many Cliffside Park High School students come from Spanish-speaking homes and were offended by the video. Also troubling: “American” isn’t actually a language and this woman is an educator.

“It’s really disrespectful,” said Alana Lopez, a freshman, told PIX 11. “Because I’m Hispanic, that’s not right. You don’t do that.”

“You go to school to learn, you don’t go to feel attacked by someone you believe is an educator,” alumni Marvin Moreno told the station.

According to students the station talked to, the teacher in question has a reputation for “degrading other cultures,” singling out students for speaking Spanish.

On Friday, Cliffside Park High School Principal Lawrence Pinto held an assembly to discuss the issue, and Monday morning, dozens of students walked out of classes in protest, some wearing or waving Puerto Rican and Brazilian flags, as they sat on the front steps of the school, according to NorthJersey.com.

Students walk out in protest to teacher comments @northjersey pic.twitter.com/ne9YOQRp2k

The Daily Dot reached out to Cliffside High School about whether the teacher will be returning but has not heard back as of publication.