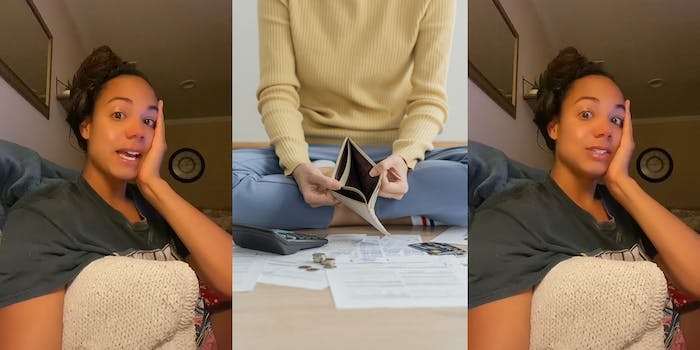 ‘Another reason why I got a second job’: Teacher opens up about disappointing pay after getting her master’s degree

'All of that time and stress for, like, nothing.'

One teacher recently shared her story of low teacher pay to viral success on TikTok. In the video, user @teacheswithcurls documents the experience of receiving her paystub after she received her Master’s Degree. The video has over 598,000 views as of Saturday.

In the United States, teachers with Master’s Degrees typically earn more than their colleagues without. For example, even if they have the same amount of experience, “a teacher with a bachelor’s degree will earn $45,390 while a teacher with a master’s degree will earn $52,750,” writes McKenna Themm of Point Loma Nazarene University citing data from the National Center for Education Statistics.

However, master’s degree or not, the take-home pay for an American teacher can still be dramatically low. From 2019 to 2020, the average starting teacher salary was just $41,163, per Mother Jones. Across experience and education levels, the national average salary for teachers was about $64,000, though actual income varies wildly by state. For example, the average annual teacher salary in Mississippi across education and experience levels is only $45,574.

User @teacheswithcurls notes that getting a master’s degree hardly impacted her pay.

“I just saw how much I’m getting paid because I have my master’s,” she says in the video. “My mind is blown, because…what was the point of me completing a master’s for, like, nothing? All of that time and stress for, like, nothing.”

In the caption, she added, “Another reason why I got a second job.” In another video, the creator notes that she took on another job at a country club.

It is relatively common for American teachers to pick up extra jobs to make ends meet. A National Education Association Research study in late 2020 found that, in 2019, “41 percent of PreK-12 teachers worked more than one job,” writes Mother Jones.

In addition, many teachers in the United States report poor working conditions. 94% of teachers in the US report spending their own money on school supplies, per the New York Times, and per-student spending is down since 2015 in a majority of states, according to TIME.

“Probably the most underpaid and underappreciated profession,” one user wrote.

“Teachers are so severely underpaid,” another added. “I just don’t understand how this is ok.”

Some alleged former students even jumped in to voice their support.

“You deserve so much more. you were the most amazing teacher I have ever had. you’re such an incredible human and I could tell how much it took out of you,” a commenter shared. “You deserve the world, I love you.”

However, there were some that told @teacheswithcurls that low pay was just part of the job in the United States, and that she should not be surprised.

“Did you not look up what teachers got paid before deciding to do it?” one user asked.

In response to commenters like these, @teacheswithcurls posted another video saying that these people were simply missing the point.

“I hate that,” she says. “The people that have no idea what it’s like to be a teacher, the education system, have the most to say.”

Viewers again supported @teacheswithcurls in the comments of this video.

“Teaching is a calling, thank goodness for those of you called to do it!” one user offered. “I couldn’t [speak] 5 minutes with someone else’s children!”

“Literally, so who do they want to teach? With that logic we would have NO TEACHERS and no education,” a second added. “Makes no sense!”

Some users commented on the low wage of teachers when compared with administrators.

“20+ years teaching here and the only ones who make money in education are the admins, certainly NOT the teachers,” a TikToker commented.

Writing for the Poughkeepsie Journal in 2014, Michael Valkys noted this pay discrepancy.

Back on TikTok, users continued to back up @teacheswithcurls.

“It is not your fault,” one commenter concluded. “You deserve a living and beyond wage.”