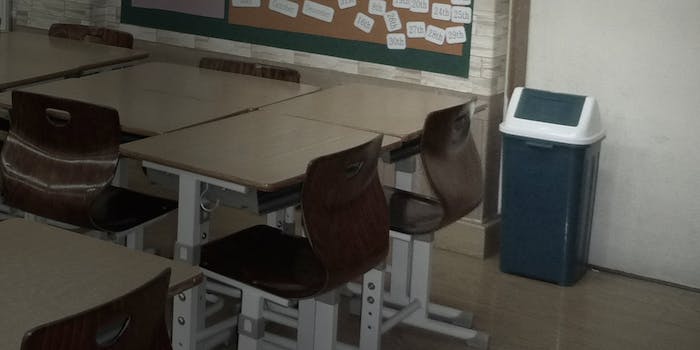 Her parents say she was humiliated and afraid to return to school.

Getting pumped to leave the house in the morning is tough for everyone, but for 6-year-old Taraji Edwards it left her in tears.

Taraji’s mother, Chartrese Edwards, told CBS-affiliate WSPA News on August 30 that she knew something was wrong when her daughter started sobbing as she tried to get her dressed for school.

The little girl told her mother that the day before she had been playing with her shoes in class when the teacher took them from her and tossed them in the trash. The first-grade teacher at Bryson Elementary in Simpsonville, North Carolina, eventually let Taraji have her shoes back, but only after she walked around barefoot.

Edwards told WSPA that she felt the teacher’s behavior was malicious and that her daughter was singled out.

Her parents have pulled their daughter out of the school and started a GoFundMe campaign to raise money for private school. They wrote on the page, “Taraji walked around class barefoot for quite some time. Then the teacher told her to go into the trash can to get them as a form of discipline as her peers began to laugh and tease her! Taraji is very sad and afraid to return back to school.”

In response to the event, the Greenville County School released a statement, noting that it does not condone humiliation as a form of punishment.

Greenville County Schools is taking this family’s concerns very seriously. The district does not tolerate embarrassment or humiliation as a form of punishment. This matter is being thoroughly investigated by Bryson Elementary and by district administrators.  The investigation is not yet complete. As this is a personnel matter, Greenville County Schools cannot release the teacher’s name or the disciplinary action taken, if the investigation determines that discipline is warranted.

But the damage, her parents say, has already been done. The district approved a homebound teacher for Taraji, while the parents work on raising the money for private school.