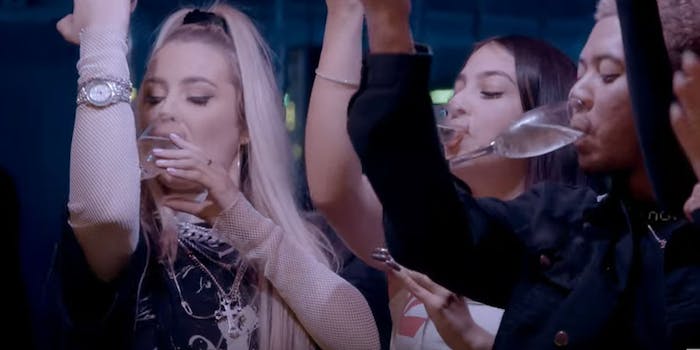 She blamed the show's editing for the scene.

Fans called YouTube celebrity Tana Mongeau “trash” after her show MTV No Filter showed her drinking heavily in front of a friend who’s recovering from alcoholism.

The latest episode, which aired Monday night, features Mongeau and a slew of friends having a “girls night” to help Mongeau cope with a recent fight she got into with her manager over health issues.

Later, the group contemplates whether or not they should invite Trevor Moran, a regular on the show whose recovery from alcohol addiction has been a talking point. Moran is ultimately invited but looks visibly uncomfortable watching the group toss back drink after drink.

“The first one to literally pass out wins,” Mongeau can be heard saying as the group downs champagne and vodka.

Moran eventually leaves, saying he felt claustrophobic and that his sobriety was at risk.

While Moran didn’t seem angry at Mongeau, fans of the show blasted her on Twitter. The original MTV tweet that included a clip from the episode has been deleted, but the angry tweets are still up.

“I was like they shouldn’t have brought him there … They didn’t need to do this,” one user wrote.

“So disrespectful. As an ex alcoholic I know how hard it is to even go out with friends let alone them have 0 boundaries or respect for what you’re going through,” another user wrote.

Many also commented on the fact that the group should have been more considerate and planned something they could all be a part of.

“One of the hardest things in recovery for me was distancing myself from my friends when they party,” a user wrote. “But good friends will make an effort to include you and NOT DO THIS. Tana and co should go to an [Alcoholics Anonymous] meeting to fully understand.”

Mongeau jumped on Twitter to defend herself and her actions, stating that the editing of the show was to blame.

“I wanna clarify one thing rn. I have cared about @TrevorMoran and his recovery more than anything in the world & have done EVERYTHING in my power to be there for him,” Mongeau wrote.

“Even in my DARKEST times shooting the show there was never a point where I’d encourage Trevor to fall of the path or not be there for him in the best way I knew possible,” she continued.

Moran also jumped in to defend Mongeau, retweeting her tread and simply writing, “I know baby” with a heart emoji.