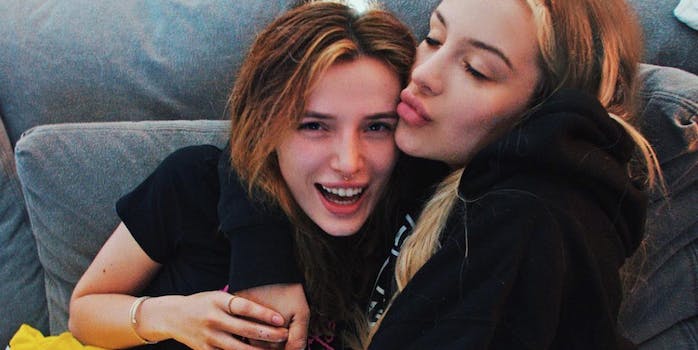 She also says Mongeau only dated her for Twitter clout.

Breakups are never easy, but thanks to social media they can be more public and messier than ever before. New Twitter beef between Bella Thorne and Tana Mongeau proves just that.

Thorne and Mongeau started dating in 2017. They had a very public, polyamorous relationship, as Thorne was also dating rapper Mod Sun at the time. In February of 2019, fans were made aware of the breakup between Thorne and Mongeau after Thorne tweeted, “Tana and I aren’t together anymore, pls stop asking.”

A few months after that, Thorne and Mod Sun also broke up. In June, Tana confirmed that she was engaged to YouTube star Jake Paul. So Bella did what any heartbroken millennial would do and let everyone know she was in her feels about the engagement via Instagram.

“When ur ex gets engaged,” she wrote, along with two tear-stained selfies.

Everyone assumed all was well after Thorne wished Mongeau happy birthday on Instagram with an old picture of the two sharing an intimate moment on a boat. Seemingly out of nowhere on Wednesday, a whole lot of drama unfolded on Twitter between the former couple. In one tweet, Thorne claimed that they are “no longer good” because Tana “broke girl code.”

“Wtf is this,” a confused Mongeau replied, adding that Thorne only uses Twitter when she is mad, but pretends to care in real life.

Thorne turned up the drama dial, claiming that Mongeau only started dating her for Twitter clout and was refusing to answer her phone to talk.

“I’ve been texting you every minute since you tweeted, and for you to be tweeting me something as hurtful as saying I dated you for Twitter is literally fucking nuts & if you honestly think that damn I lost you,” Mongeau replied.

Fans think Thorne’s allegation of Mongeau breaking girl code stems from Tana hanging out with Mod Sun, Thorne’s ex. Mod Sun and Mongeau dated Thorne at the same time–but not each other. Mongeau and Mod Sun were recently spotted going to dinner together.