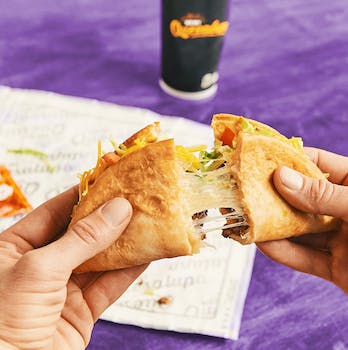 Taco Bell unveiled their latest cheesy creation, the Quesalupa, in a commercial during Super Bowl 50. Before their Quesadilla/Chalupa hybrid even debuted, though, the company managed to get social media buzzing about the new “top secret” food—which, of course, is exactly what they wanted.

From the exterior, the Quesalupa looks like your run-of-the-mill TBell Chalupa, which is their Taco Supreme (ground beef, sour cream, shredded cheese, lettuce, diced tomato) with a fried flatbread shell instead of the ordinary taco shell. On the inside, however, pepper jack cheese is baked right into the shell—hence the quesadilla element.

“You can’t go wrong with melted cheese,” says Kat Garcia, Taco Bell’s Senior Marketing Manager. And she’s right: it’s the defining ingredient to the tasty matrimony between two of Taco Bell’s most popular menu items. Garcia cited inspiration from the pupusa, with the Quesalupa being Taco Bell’s spin on the Salvadoran dish.

There’s been a lot of build up for the Quesalupa, which was cooked up in 2015 and tested in 36 Taco Bell restaurants in the Toledo, Ohio, area. The Franken-snack tested about the same or even better than the Doritos Locos Tacos, Garcia explained. With that encouragement, the company decided to take the Quesalupa national.

Toledo has the Quesalupa. If they don’t like it, America won’t get it. Tweet w/ #Quesalupa if u want it in your town. pic.twitter.com/AF1BE5m1VK

To generate buzz before the Super Bowl, Taco Bell put out a redacted press release to tease out the then still-mystery item, which suggested the new item would be a combination of two unidentified foods. “So many key details have been blacked out that you can probably just go ahead and play Mad Libs with it,” AdWeek joked.

Even if Taco Bell was being coy in order to create intrigue, people who had already tried the Quesalupa were posting to social media about the soon-to-be-revealed creation.

Everyone the quesalupa comes out at taco bell soon on feb 8th tell everyone its gonna be good. Also it's top secret according to TB

The Quesalupa finally became available nationwide the day after Super Bowl 50, so I decided to get my hands on one (or a couple) to try it myself. When you unwrap a Quesalupa, it’s supported by one of those holders that you’ll also find with the Doritos Locos Tacos that ensures everything (mostly) stays in place. Overall, it definitely tastes extremely similar to a Taco Supreme, since it obviously contains all the same ingredients, although I thought the pepper jack cheese elevates really it. Usually I’m meh about the shredded cheese that’s put on many of Taco Bell’s offerings since it doesn’t really add much. The melted cheese adds an extra kick of flavor that also helps hold everything together. 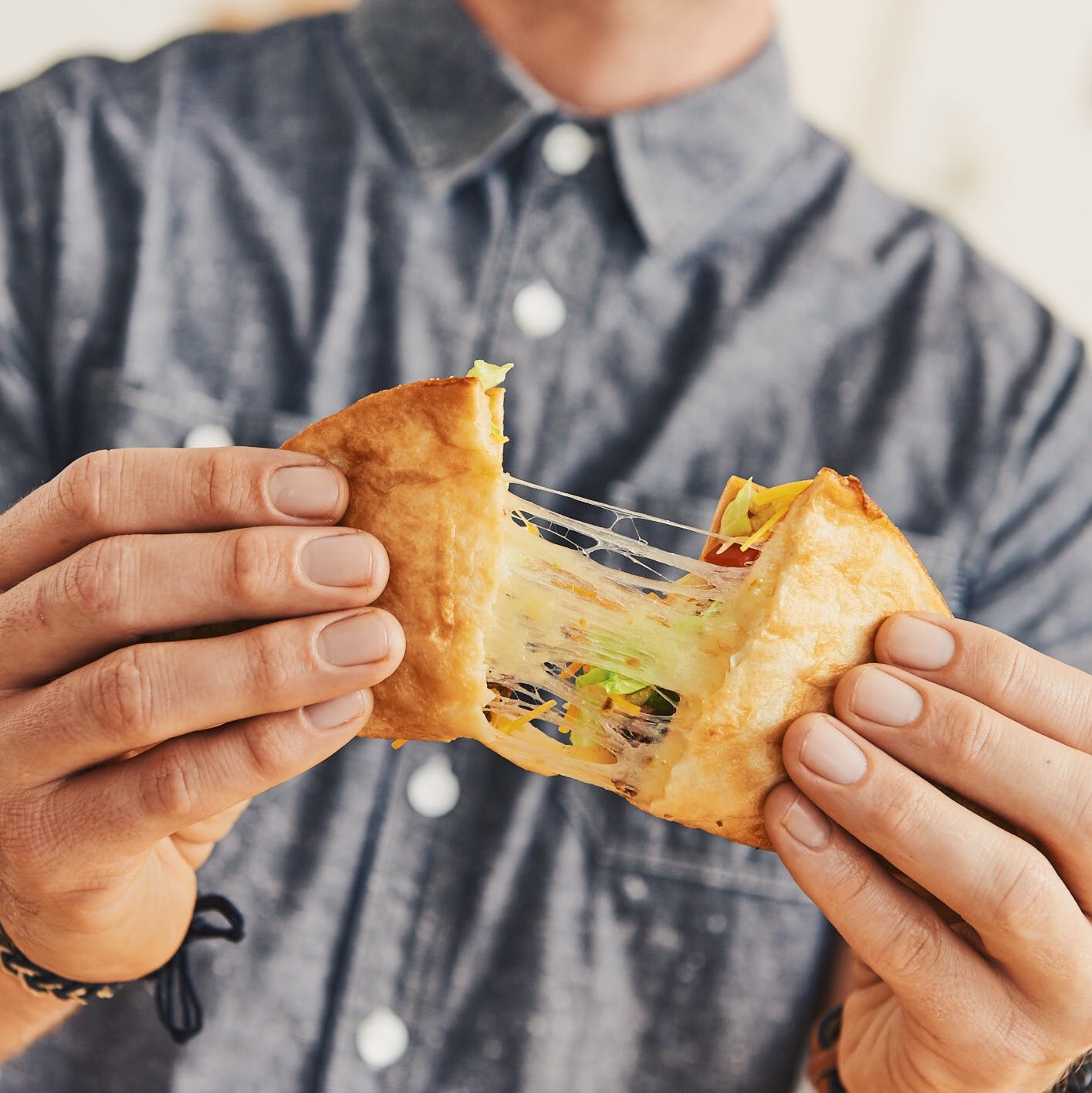 How the Taco Bell Quesalupa looks in the company’s promotional materials. 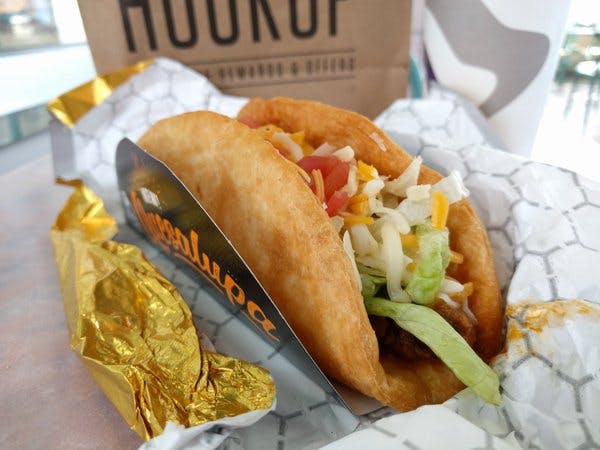 How it looks IRL.

One of the gimmicks to the Quesalupa featured prominently in its ads is that when teared apart, the cheese stretches out. Doing this IRL doesn’t execute as well as it does in the commercials, of course, but I will admit the effect is there. You definitely have to try this when it has just been served and the cheese is still warm. I tried ripping a Quesalupa apart that had been sitting for a bit and the cheese sort of stretched but not really. Cheese, such a volatile substance.

Taco Bell went all out with the marketing campaign for the Quesalupa: After the 30-second spot during the Super Bowl, there was an extended version available online. The commercial used #BiggerThan and showcased some of the Internet’s most buzzed about things as of late, including man buns and hoverboards. There was even a Snapchat filter for the launch. 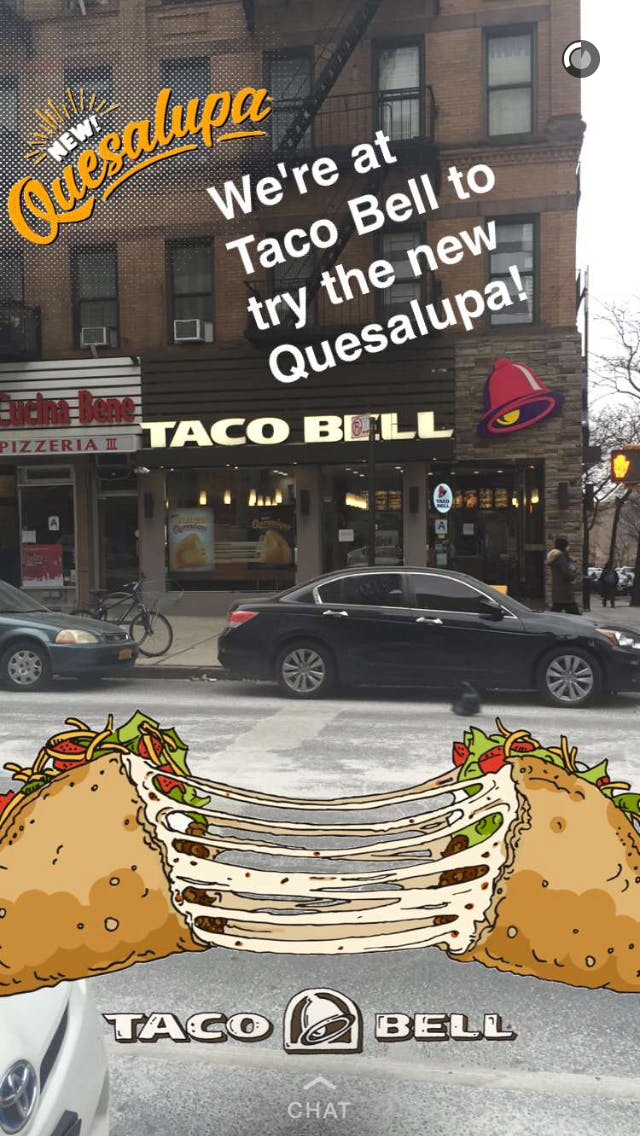 It makes sense for a brand like Taco Bell to use various viral culture happenings for their commercial. The fast food company is arguably one of the few that really understand online trends and the youth demographic. Between starting a petition to get a taco emoji before it was available and turning to prominent YouTubers to get the word out about its shenanigans, the brand seems keen to speak to people who love all things webby.

“The marketing is so rooted in culture, it’s applicable to people everywhere. ‘Bigger Than’ is just a fun thing to build off of,” Garcia says. “The campaign is really a work of the product. And the campaign has to be equally as epic.”

As for regional ads, Taco Bell has also tapped what they call “Small Town Big Shots” to grab the attention of people from the area that will recognize them. For example, Bryan Wilson who’s been dubbed as the “Texas Law Hawk” in the Dallas/Fort Wayne area, finds a Quesalupa after punching through a wall in his ad. Other Small Town Big Shots include Wayne Clifton‘s Auto Connection of Virginia Beach, Virginia; Rico Kreindel aka Mr. Appliance in Eugene, Oregon; Fancy Ray, who you might know from Treehouse Furniture for the Minneapolis area; and Marc Brown of Cleveland, Ohio who is known for Norton Furniture.

The Quesalupa won’t be a permanent menu item, as its campaign is only running for 15 weeks. So pay a visit to your neighborhood Taco Bell to taste it yourself.