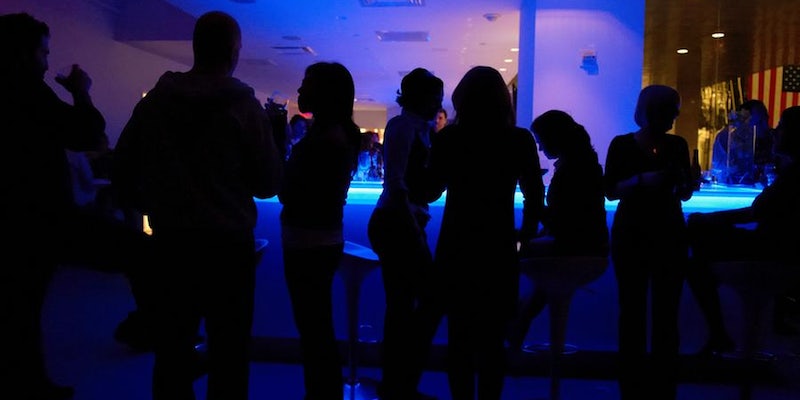 I let an app tell me where to get drunk

Nowhere to go on a Friday night? That's no problem, thanks to a new app that makes plans for you.

“Where should we go tonight?”

“I don’t know. I guess we could go to one of our usual spots?”

Thus begins the usual lackluster night out. But it doesn’t have to be that way.

A new app called TAABS is looking to provide an answer to where the hell you should go on a Friday or Saturday night. It was founded by childhood camp friends Max Bosch and Brian Helfman, who were both feeling unfulfilled at their jobs when they first came up with the idea. 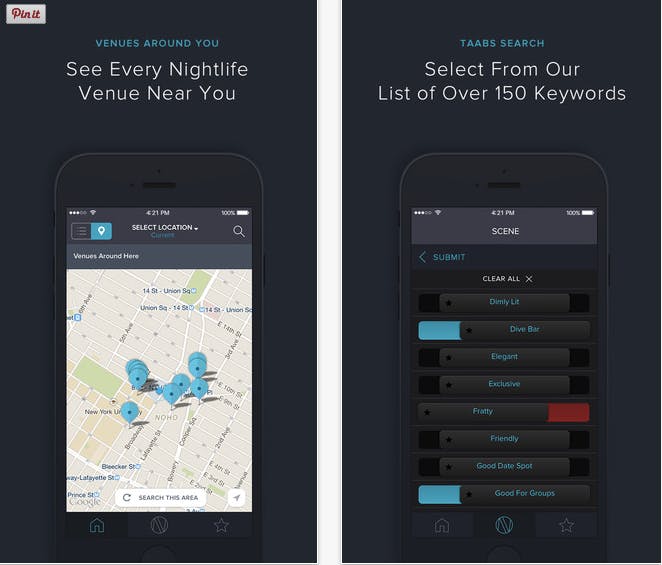 “TAABS was really something that Brian and I had talked about starting for three years,” Bosch, 26, told the Daily Dot. “My unrest at my previous job was really just the catalyst to leaving. I really felt like I was stuck in the mud and needed something that wasn’t so repetitive and limiting.  “

The app officially launched in April. Now, about 2,000 Manhattanites are using it to guide them on their escapades.

“TAABS was 100 percent born out of a need that we felt wasn’t being filled by Yelp, Foursquare, Google, UrbanDaddy, or any others in our space,” Helfman, also 26, told the Daily Dot. “We felt like we could do it better because we were normal New Yorkers who just wanted to find NEW places to go.”

“One of the main reasons for starting this app was that friends would always text me for recommendations for bars in parts of the city that I had no idea about,” Bosch said. “It’s pretty difficult to know about the best rooftop, happy hour bars around Midtown East.” 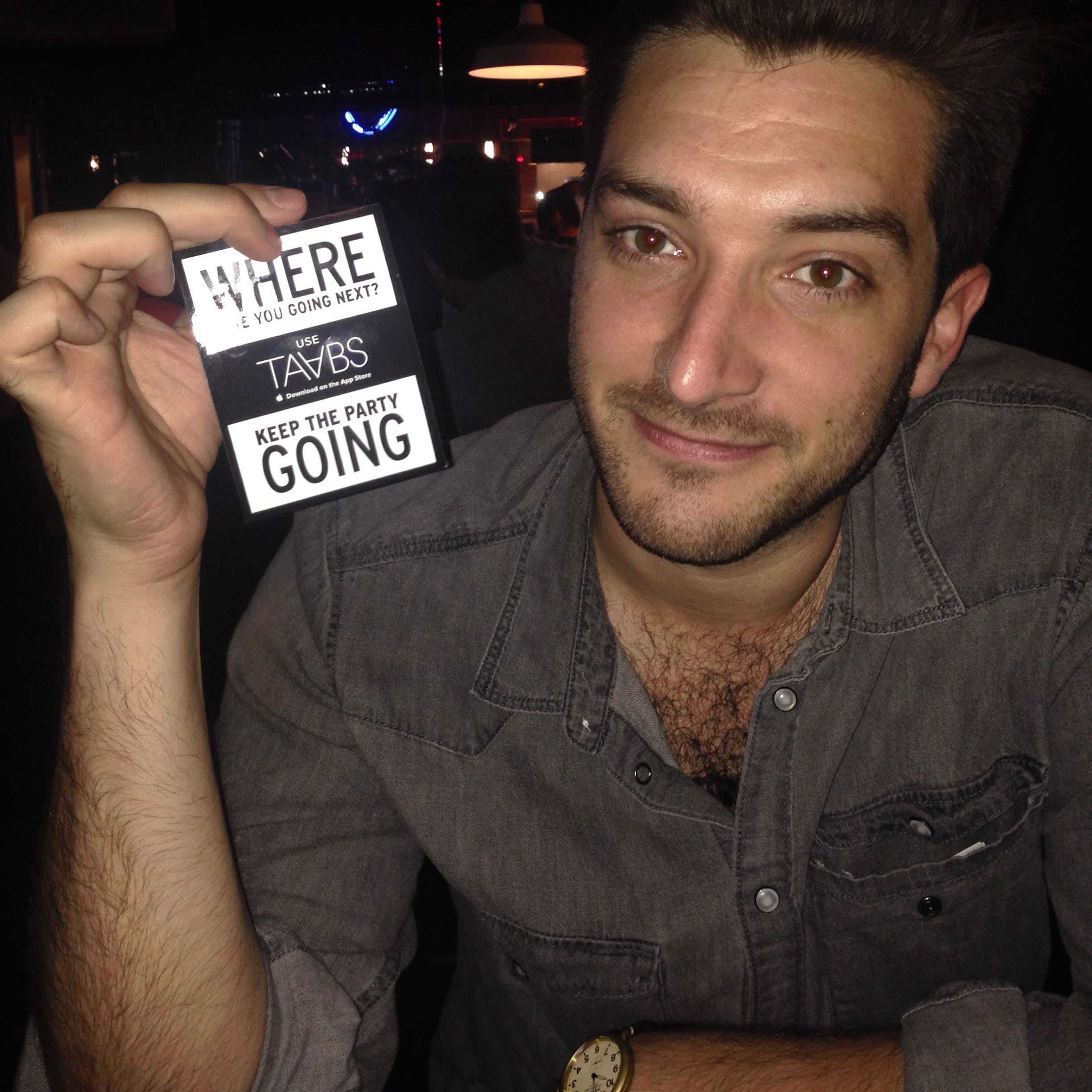 So Bosch and Helfman set out to create TAABS, along with lead developer Ankit Minocha. But was it really possible that an app, knowing nothing about me, could help craft my ideal good time? I needed to see for myself.

I met up with Bosch last Friday night. I know him from my past life as a PR girl, when he was a starving artist. While Bosch still creates art, he’s since devoted his life to developing TAABS, and I wanted him along for the ride when I gave it a test drive.

While we were making our plans, I naturally turned to TAABS to pick our meeting spot. We picked a time and general area, and I swiped over to the app to enter what I was looking for. I went for “bar,” “after work,” and “seating area.” 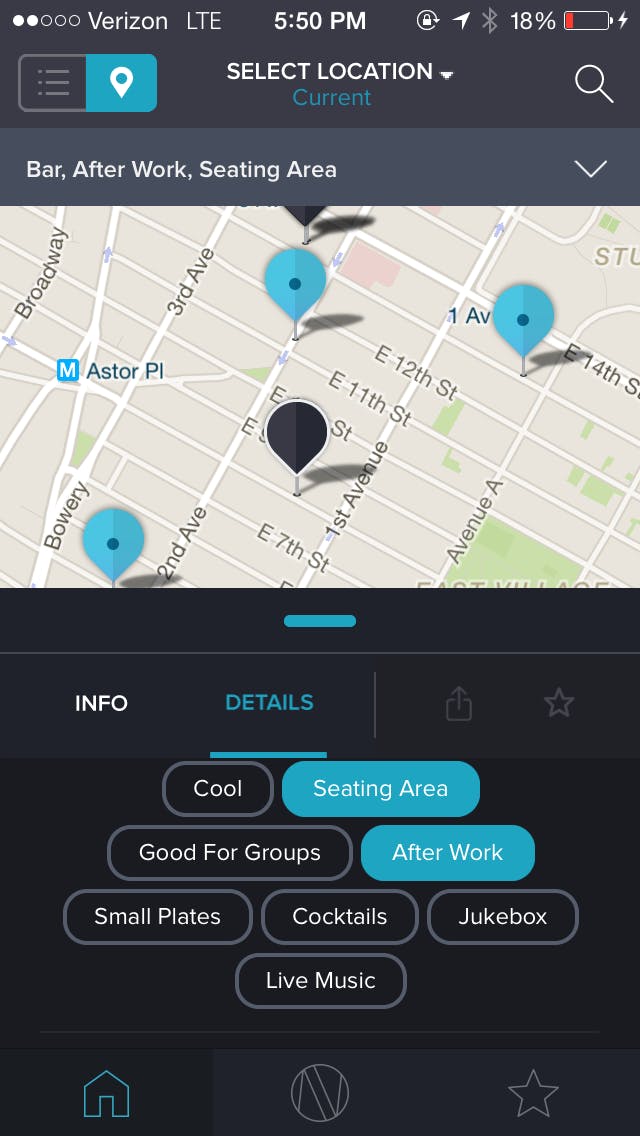 Suddenly, a bouquet of bright blue drop pins littered my screen, showing me all the places I could go in the area. There were also black pins, indicating a venue that met only some of my criteria. I decided to live dangerously and opted for a black pin, which was Holiday Cocktail Lounge on Saint Marks Place.

I told Bosch to meet me there, and despite the bright red awning, which was more consistent with a suburban community center, it was actually super cool. Dark interior, ample seating, extensive cocktail list: check, check, check. 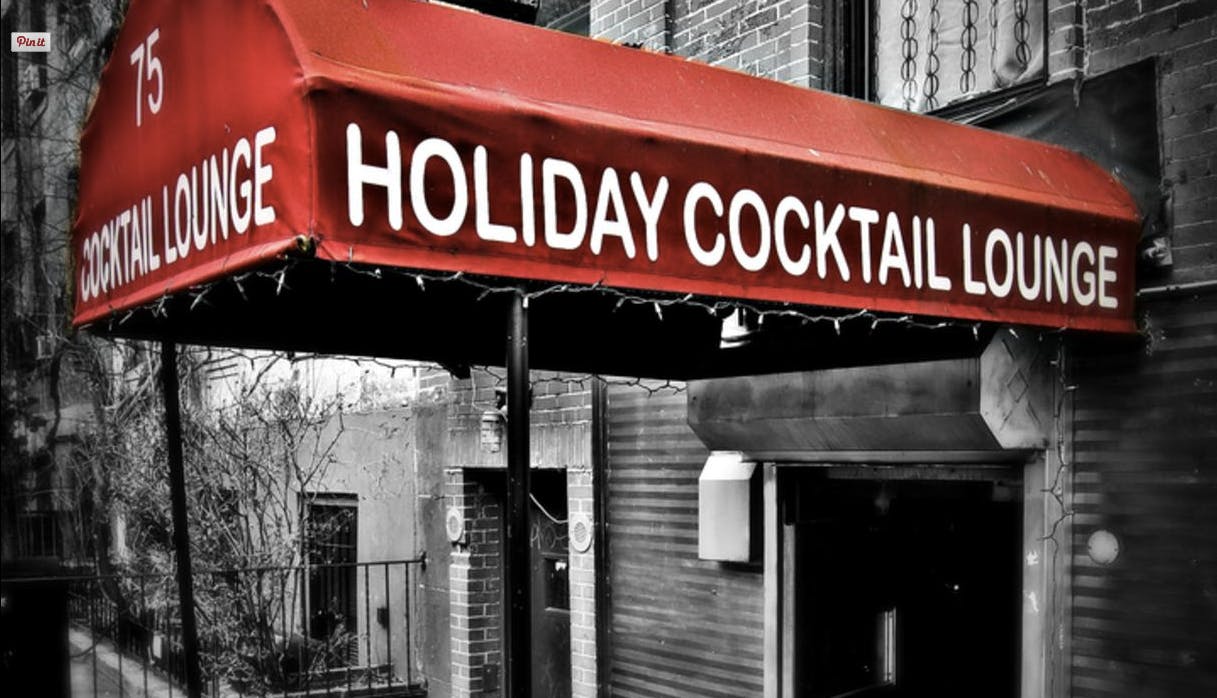 We took a seat at the bar, and Bosch showed me the ins and outs of his passion project turned legitimate business venture. Turns out there were all sorts of specifications that I was missing out on. Taxidermy! Christmas lights! Big Buck Hunter! So many bars, so little time.

It was becoming apparent that if I wanted to go to, say, a craft beer bar playing oldies in the West Village, or a cabaret club in Chelsea with food and a fireplace, I’d be able to get my wish, thanks to TAABS.

Bosch also showed me how users can leave “insider notes” to share tidbits of information about the venue, or let others know that there is, in fact, no taxidermy on the premises. This is particularly beneficial to one group: drunk people.

“I think having keywords available makes TAABS the easiest solution for drunk people,” Bosch said. “Our insider notes are purposefully short and concise so that you don’t feel like you are doing research in your downtime.” 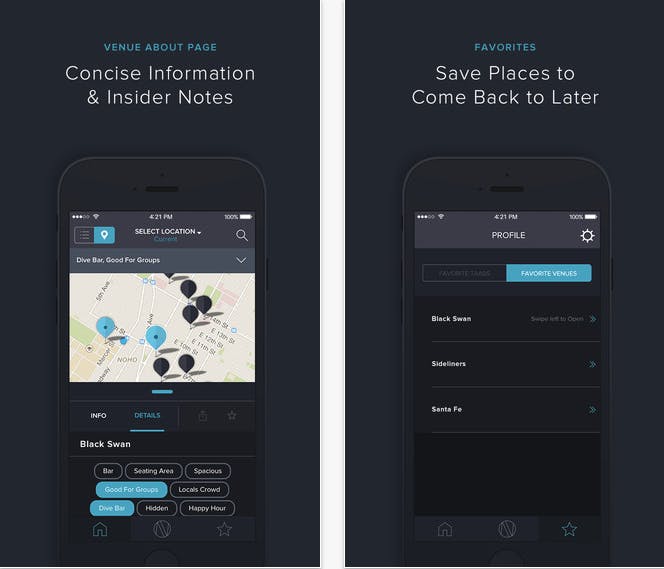 As we downed our first round and planned our next stop, I decided to get a little more wild by specifying “jukebox” and “private bathroom.” You know, just in case I met someone and we needed a bit more privacy. 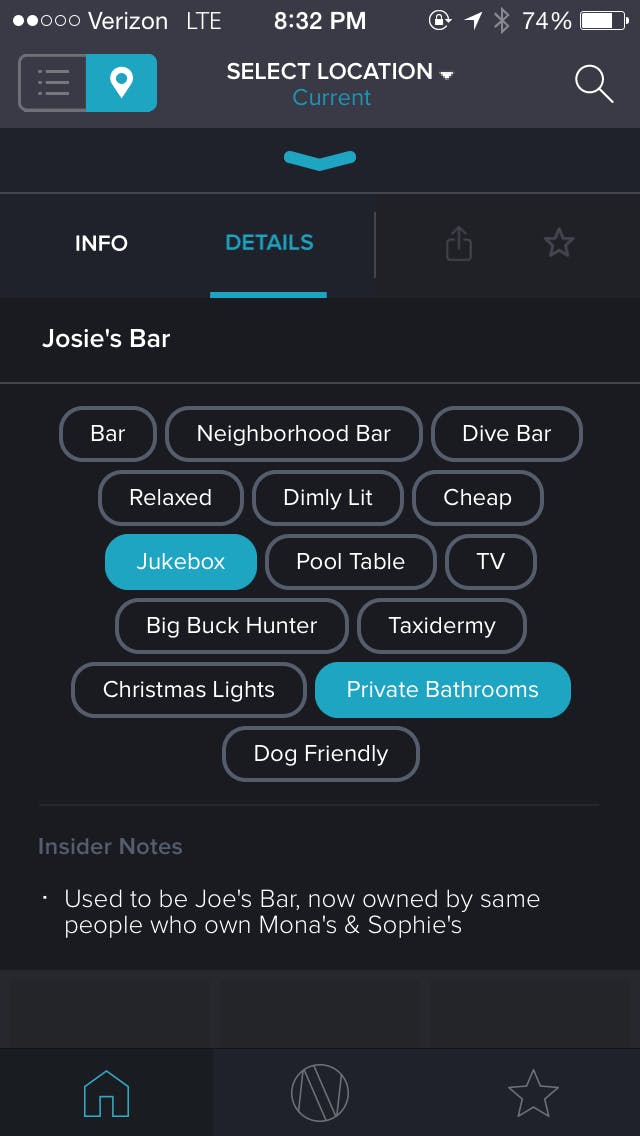 Of course this bar crawl was strictly business, but it was helpful to know that should I need a private moment in a crowded bar, I’d be able to find a place for it.

We landed at Josie’s Bar on East 6th Street, and not only did it have a jukebox and private bathrooms, as promised, but also a pool table. I promptly posted up at the table, and while Bosch and I both proved to be pretty shitty at pool, I eventually won.

With our second round drained, it was time to move to a final destination. It was getting late, I was feeling the TGIF spirit, and something deep inside me longed for a disco ball. That’s exactly what I got.

When I keyed in “disco ball,” TAABS pointed us to Parkside Lounge. Sure enough, when we arrived at the East Houston Street bar, there was a shiny, albeit tiny, disco ball, waiting to be danced under. Bonus points for decorative skeletons. 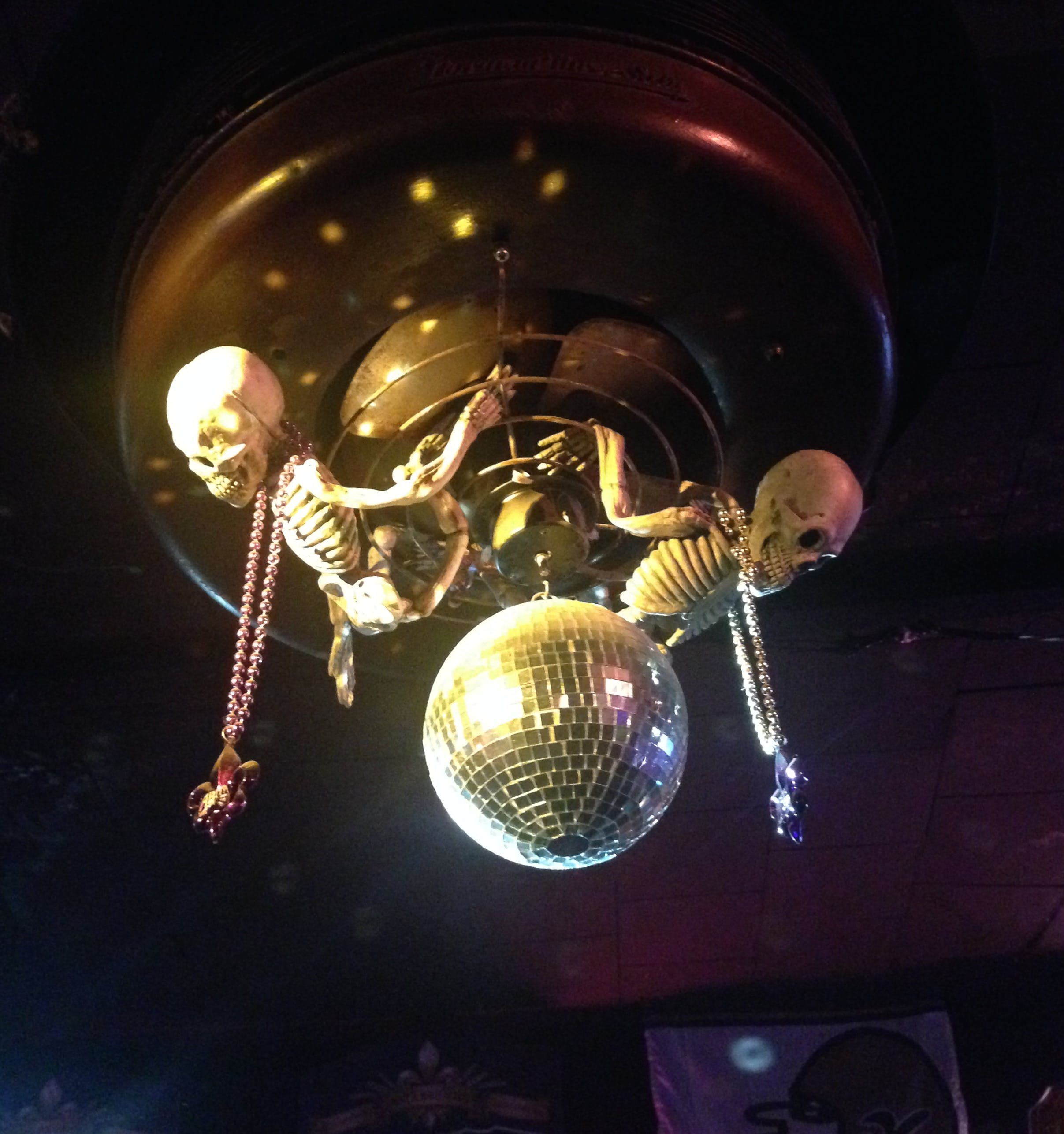 So TAABS had clearly demonstrated to me that it was capable of planning a successful night on the town in Manhattan. But could it work in other boroughs as well? According to Bosch, the next stop on the cyber map is Brooklyn, and Queens will follow shortly therafterafter. TAABS also plans on expanding to four or five news cities in 2017.

The app is also brewing up advertising plans for beer and liquor brands and paid partnerships with venues to promote specials and events for users in real time.

“Basically, we are bringing the chalkboard sitting outside the bar and putting it on the app for targeted users,” Helfman said.

So go ahead and mix and match bars for your perfect night. Just don’t mix liquors, because that literally never ends well.

Photo via Jason Kuffer/Flickr (CC BY 2.0)