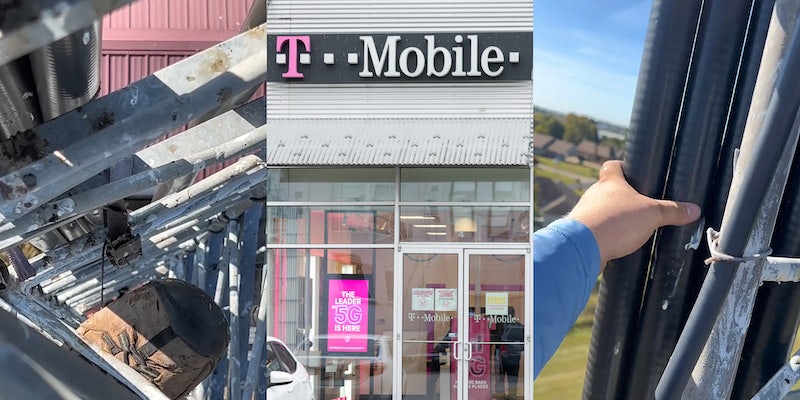 'I mean, this is heavy freaking stuff here, and it’s just floating around in the wind'

A user on TikTok has gone viral after alleging that T-Mobile used ratchet straps and “no other supports” to hold their cabling on a 5G cellular tower.

In a video with over 595,000 views, user Cam (@lazlo.ky) shows the cables in question. The 3G and 4G coaxial cables are held in place using ratchet straps, while the new 5G cables appear to not be secured to the tower at all, barring “the top strain relief,” writes Cam.

“It’s just flopping around,” Cam says of the 3G and 4G cables. “And your new stuff that’s brought up the tower is not even secured. It’s floating around freely. I mean, this is heavy freaking stuff here, and it’s just floating around in the wind.”

In comments, Cam claims that such a cabling setup is “dangerous.” The TikToker was present on the tower for a different reason, he says, and had no involvement with the installation of the seen cables.

@lazlo.ky @T-Mobile using ratchet straps to hold their cabling to the tower for their new deployments. Yikes. No other supports on this tower except the top strain relief. #5g #tmobile ♬ original sound – Cam Lasley

According to Cam, he was told that T-Mobile does not own the tower.

“It’s owned by a radio station I did work for today,” he says of the tower in comments.

Furthermore, Cam says he was informed that the installers did not speak English, which presented problems during installation.

“From what I was told by the radio station owner it was a few guys that sounds like they spoke German and no English,” he wrote. T-Mobile is a brand name for the German telecommunications company Deutsche Telekom AG. “…The radio station owner couldn’t communicate with them when they were working which caused issues. Coax was mounted on the climbing face.”

Additionally, Cam notes that it is likely not a temporary solution as “5G was installed 8 months ago.”

Other commenters speculated as to why the cables appear so loosely secured.

“The answer is ‘To Save Money,’” wrote one commenter.

“I would say it’s on thr 3rd party contractors,” offered another. “this is usually the case.”

Regardless of the reason why the cables were installed this way, Cam insists that the cabling should be fixed to be safe.

“…It’s working but incredibly unsafe,” he explained in a comment.

The Daily Dot reached out to Cam and T-Mobile via email.