‘Swirl culture’ gets a new interracial dating site with SwirlMingle

The rise of relationships between black women and white men helped inspire the controversial new website.

It’s been 48 years since Loving v. Virginia, that landmark Supreme Court case defending the marriage of a black woman to a white man. Yet in 2015, support for interracial dating is the reason behind the death threats one young Oklahoma man says he has gotten online over the past three weeks.

When Jacob Mason, 22, of Oklahoma, launched the new interracial dating website SwirlMingle.com on Tuesday, the public’s reaction to the site was strong. Reactions on social media were divided and extreme—people reacted to the website and its three young, white male founders with either excited anticipation or utter vitriol. 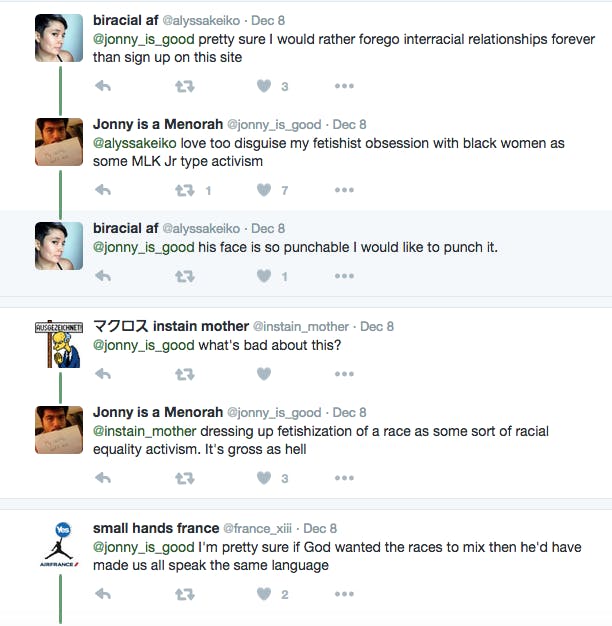 In a phone interview with the Daily Dot on Tuesday, Mason explained that when he posted a video to YouTube in December 2014 about his love for black women, he wasn’t surprised by some negative reactions. What did surprise him, though, was the outpouring of support he also received.

“A lot of people messaged me—like, a lot,” Mason recalled. “People were telling me their stories about abuse and about being disowned from their families just because they liked someone of a different color.” In conservative areas like Oklahoma, the typical reaction to an interracial couple in public is not exactly friendly, Mason explained.  “A lot of people here are racist,” he said. “That’s what I was raised around.”

Still, interracial marriage is consistently on the rise in the United States. According to 2010 Census data, around 15 percent of all new marriages in the nation were between partners of different races or ethnicities, up from only 6.7 percent in 1980. Of black people in interracial marriages, the majority were men: 24 percent of all black male newlyweds married someone of a different race, while only 9 percent of black women did.

The visibility of interracial couples is on the rise in Hollywood, too. A few years ago, Seal and Heidi Klum were in the minority. Today, couples like Kim Kardashian and Kanye West, Robert Pattinson and FKA Twigs, and Mark Zuckerberg and Priscilla Chan dominate headlines, while the romance between Olivia Pope and Fitz is the central column of one of TV’s most popular series (Scandal).

Despite the prevalence of interracial relationship role models, studies still show that people using the largest dating apps and websites have issues when it comes to race. A January piece report in  The Kernel found that, “despite being the most likely to respond to messages themselves, black women tend to have the lowest rate of messages received—from any race, including black guys.”

The positive responses to Mason’s YouTube video about his love for black women drove him to explore the Internet’s “swirl” culture, where Tumblrs and Instagram accounts are devoted to posting photos of interracial couples, and the #teamswirl hashtag on Twitter is full of black women looking for white boyfriends and vice versa. That same month, Mason partnered with his 21-year-old friend Boomer and started building what would eventually become SwirlMingle.

For two young men without much coding experience to build an international dating site is no small feat. Still, the past year has been fraught with mistakes and learning curves. A February beta launch failed due to poor functionality, but proved massive interest in the site itself. A brief GoFundMe fundraiser was taken down after a week online when the founders decided they didn’t want to take donations, instead vowing to fund the project out of their own pockets. Eventually developer Shaun VanWeelden joined the project and whipped the site into shape.

I watched carefully as the site took form in the 24 hours after its launch Tuesday, creating a profile and conversing with some of the approximately 2,000 users that joined that day. Of the new users, the overwhelming majority are black women.

One woman who created a profile on Tuesday is Octavia Fox, a 22-year-old nursing assistant in Memphis, Tennessee. “I think that black women are so attracted to this site because it’s a door opening up for women who want to date outside of their race,” wrote Fox in an email to the Daily Dot.  “We don’t have to worry about negativity as far as our skin color, because its loved and accepted. I have hope of finding my dream guy again!”

Black women comprised the bulk of the first signups, but there has been a small smattering of men and women of various races. Mason said that the beta launch had similar results: black women flocked to the site immediately and men of various races trickled in more slowly over the next few weeks. By the time I checked back in with Mason on Wednesday, he’d discovered that a healthy percentage of the new users were located internationally—with 60 profiles created by South Africans alone.

While some black women were indisputably thrilled about SwirlMingle, others were its most vocal critics on social media. Twitter user Zoe Samudzi posted a series of tweets on December 1—just as marketing for the upcoming launch was ramping up—that called out Mason and the site for “fetishization, an [sic] objectification, the creation of a caricature disguised as love.”

I don’t know who this man is, but I know that I loathe him. pic.twitter.com/caFuRGB3WH

Later, Samudzi explained her stance to the Daily Dot via email, being careful to add that she’s “not speaking for black womanhood,” but mostly from her own experience of dating white men as a black woman. Romantic relationships between black women and white men are rooted in complex, sometimes toxic politics, she explained.

“I think the reason many of us, or at least why I specifically, used to be flattered by white male advances is because we see white masculinity, and proximity to whiteness, as aspirational,” said Samudzi. “When white masculinity represents the identity with the greatest amount of social-structural power, why wouldn’t we be flattered if someone so symbolically and materially powerful wants us?”

Krystal Joy, a college student in Portland, Oregon, also spoke to the Daily Dot from personal experience. She said that after looking at the SwirlMingle site, she “immediately felt grossed out.” Joy explained that she’s only dated men outside of her own ethnicity, and while she liked the idea of a site devoted to interracial dating, she was skeptical of the intentions behind it.

Both Joy and Samudzi cited studies showing that black women are more likely than other groups to be single and to struggle with finding a male partner of their own race. One possible explanation as to why that might be is a Brookings Institute study from this September which posited that the criminalization of black men has created a “man shortage.”

“The lack of marriageable men in the black community is affected by the very high rates of incarceration and early death among black men compared to white men,” reads the Brookings Institute report. “Among black male high school dropouts, 60 percent will be dead or incarcerated before the age of 35.” It should be noted that “swirl” culture is built primarily around romance between black women and white men—often shortened to BWWM online.

Despite these statistics, at first glance, the necessity of a site devoted to interracial dating isn’t clear. Can’t anyone just log on to OKCupid, Tinder, or Match and choose potential dates based on their skin tone already? Man shortage aside, all three of the women interviewed about SwirlMingle identified a more insidious issue: black women feeling, or being perceived as, unattractive.

Fox elaborated on one fear shared by some black women: “What if he’s not into black girls?” The skin tone issue was also raised by Joy, who referenced the stigma within the black community against darker-skinned women (a concept called colorism). But Samudzi put it most poetically in a tweet that suggested a site like SwirlMingle “capitalizes on misogynoir: this characterization of love is implicitly predicated on a very manipulative ‘no one loves you, but I do.'”

A visit to any of Jacob Mason’s social media profiles reinforces the idea that black women often struggle with the racial politics of dating—no matter what race their partners are. Black women make up the majority of commenters on Mason’s posts and many of their comments are laudatory: 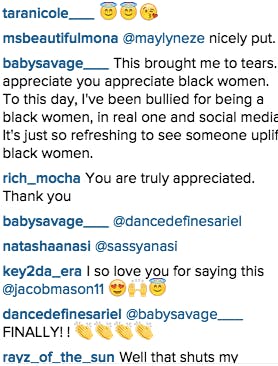 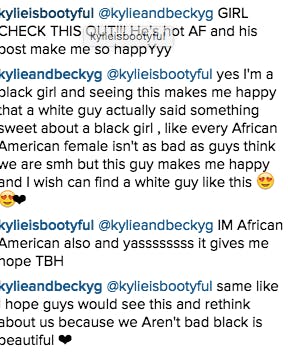 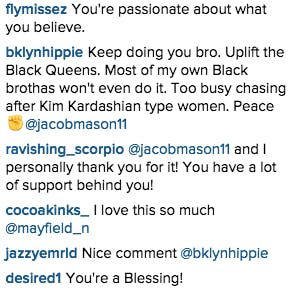 SwirlMingle is not the world’s first interracial dating site:  InterracialDatingCentral is the largest and most popular, boasting over 1.5 million Facebook likes, and other sites include MixedSpark, InterracialMatch, and Interracial Cupid. The major difference between them all is that SwirlMingle is free to join and use and boasts a younger, more modern interface.

While Mason won’t be using his own profile to find a girlfriend (“that’s immoral”), he does hope that the site will inspire more acceptance of dating across all boundaries. In order to make sure that the site was adhering to that mission, he said, the founders worked with an LGBT consultant to make SwirlMingle friendly for everyone. Users can search profiles based on race and ethnicity, location in the world, age, and a variety of genders including transgender men and women. For the sexually fluid, there’s even a checkbox reading “I’m open to anyone.”  Although SwirlMingle’s motto is “‘love has no color,’ according to Mason, users have more options than seeking a partner based only on race.

Mason admitted that his own attraction is mostly oriented toward black women. Still, he insists that a preference is not the same as a fetish. “I understand where [that criticism is] coming from,” he said. “But I’m not generalizing a complete group of women in a sexualizing way—it’s not about like, ‘oh I love a big booty’ or ‘those lips’ or whatever. It’s not putting a kind of woman into a category just for sex.” In his YouTube videos, he tried to explain his love for black women:

Still, he sometimes struggles to clarify his point, and some might say he comes across as having a bit of a white savior complex. On the other hand, Mason is also just a 22-year-old kid from Oklahoma.

Though it’s co-founders are clearly developing their approach as they go along, SwirlMingle has some fans already—or at least people who appreciate what they are trying to do. Octavia Fox, the Tennessee nursing student, pointed to the never-ending stream of new dating apps and services that seem to hone in on smaller communities and specific shared interests.

“I believe that a site like this is very much needed,” Fox said. “Christians have Christian Mingle, farmers have FarmersOnly, so why can’t people of different races whom like to date any and all races have the same thing?”