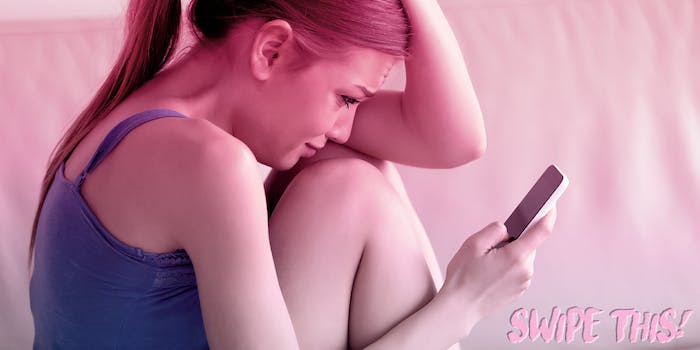 Swipe This! I blocked my ex on social media, so why is he still haunting me?

Learn how to slay your relationship zombies.

I’ve been having an issue with my ex-boyfriend (we broke up more than two years ago) and was hoping you could offer some advice. He hasn’t engaged in behavior that could be legally defined as stalking per se, but I can’t get rid of his presence in my life. His behavior isn’t violent; I just feel “watched.”

After we broke up, I told him that I needed time but maybe we could be friends eventually. I told him if I reached that point that I would contact him, but he should not contact me first.

He didn’t listen and kept contacting me with seemingly innocuous messages, but I never responded. I eventually blocked him on all social media, including LinkedIn. He showed up at one of my college club meetings because he knew when I would be there, and my adviser (who he was friends with because he used to be in that same club) had to tell him he was not to do that.

We had a couple of mutual friends and so we ran into each other twice at parties. I was polite, but not friendly. As we spoke, it came out that he knew details from my life, such as vacations I took, because friends told him when he asked. I was so upset that I stopped being as open with people who know him because I hate these details getting back to him.

I recently moved across the county for work. I planned to work in this town for a while before moving to a different city, something I openly talked about with friends. Three months after I moved, he took a job in the city I eventually planned to move to and texted me to let me know and see how I was. I thought I blocked his number, but I guess not.

I don’t know what to do. I’m at a loss. I feel like he has stolen something from me because I no longer can move to the city I wanted to (we are in the same industry and it is a pretty small city).

He is blocked on everything, so there really isn’t a way for him to contact me unless it is through work. I hate the fact that after more than two years I still feel his presence lurking in the background—even after moving across the country.

I feel powerless. He hasn’t done anything I can take legal action against. I guess my question is, where do I go from here? What can I do to no longer feel like this person is watching me?

Trying to Live My Life

Dear Trying to Live My Life,

So you’ve got yourself a zombie. Some exes ghost, some exes cling, and then there are those who rise back from the dead so many times that your love life begins to feel like a bad horror flick.

Two years is a long time to have someone from your past still taking up so much of your mental energy. I can understand why you’d feel depleted. Hopeless. Powerless. But I’m here to tell you, you aren’t.

You can outrun this zombie. Yes, you can live! But you can’t do it while you’re lying on the ground murmuring, “This zombie is going to kill me.” You’ve got to get up, dust yourself off, and reach for the nearest blunt object because, my dear, if you don’t, that boy is going to feast on your brains indefinitely. You think two years is a long time, but I promise you there are people who have been having the kind of interaction you describe for a decade or more.

So let’s talk zombie killing. Any good horror buff can tell you that if you want to take out a zombie, you’ve got to destroy its brains. And your ex is no different. As long as he believes that there’s a sliver of hope, he’s going to keep resurfacing. You may be thinking, but I didn’t give him hope! I told him to leave me alone! But what you really did was you gave him a “maybe.” Even if it was a maybe to just a friendship, “maybe” can be a very dangerous word to someone who is hoping and wishing for a happier ending than the one they got.

I don’t blame you for wanting to let him down easy. It’s not fun to be the bad guy. And I know few people who relish being the cause of someone else’s broken heart. But sometimes the kindest thing to do is an act that otherwise might seem cruel. I wonder what would have happened if you had told your ex, point blank, I don’t want to be in touch with you. What if you had said, I’m grateful for the time we shared, but that time is over now. Would you have felt like a bad person? Or would you have felt powerful and in charge of reclaiming your space?

You say you blocked your ex on all social networks, and I think you had the right idea in doing that. Someone who is clinging to hopes of romantic reconciliation gains nothing by having access to your most current photos or your career networking habits on LinkedIn. And I bet you felt stronger and safer the moment you hit block. But then you say he reached out to you via text and, hmmm, how did that happen?  “I thought I blocked his number, but I guess not.”

All this makes me wonder if part of you wasn’t still feeling guilty about being the “bad guy.” I think it’s very possible your fear of being unkind is leaving you open. You’re feeling powerless and afraid because you’ve never given yourself total permission to shut this person out. You couldn’t even tell your friends not to share information about you with this person. Instead, you gave yourself more limitations and restrictions. I believe you did this because you are terrified that if you really told everyone how you feel, if you really asked for what you needed, it wouldn’t be nice.

Can you imagine for a second what would happen in a zombie flick if the person fighting off the zombies tried to be a bit nicer?

I’d like you to consider that your ex is behaving this way, not because he’s bloodthirsty, or because he wants to make you suffer, but because he’s never gotten a clear signal from you that you wanted him to stop. No one gets notifications when they get blocked on social media. So if he wasn’t perusing your accounts regularly, he may not have even noticed what you did. And it’s not an insane or harmful act to ask a mutual friend how an ex you’re fond of is doing.

Is it possible your ex just wants a friendship and is acting the way people do when they’re hoping to build that? Maybe.

But you don’t want a friendship, so where should you go from here? I think your best bet is to face your zombie head on. Have a conversation with him in which you are honest about your own needs and how past contact has made you feel. And most importantly, be honest about the kind of contact you want in the future. What’s the worst thing that can happen? Maybe your ex will ask for more than you want to give. Maybe he’ll get angry. Maybe he’ll show you that he’s still grieving what you once shared. And maybe you don’t want to face all that. But, in my experience, one uncomfortable conversation can save you many months of painful overthinking and anxiety.

And if you have to show your teeth to get him to back off, that’s OK too. Don’t worry about being a nice girl. Some zombies require a full-on decapitation. It’s OK to pack your chainsaw and it’s OK to cut his hopes in two. In the long run, you’ll be doing him and yourself a favor. Who knows? If he doesn’t believe there’s a future for you two, he may not even go through with his plans to move to the same city.

Either way, I hope you will opt not to abandon your dreams of a brand new life. You have a right to walk in the light of day, zombie-free. So grab your bludgeoning tools and get to work. You’ve got a killer movie ending to execute.