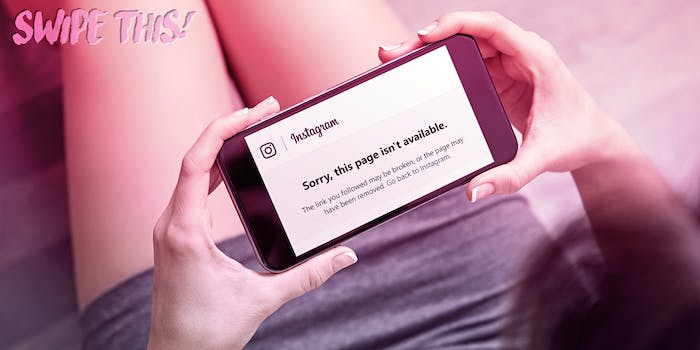 Swipe This! Why did my ex delete photos of me from her Instagram?

Here is what your ex doesn’t owe you: a shrine to your goodness.

Last month, I broke up with my girlfriend of over a year. We got to a point in our relationship where she saw a future, but I didn’t. It made me sad that I couldn’t give her what she wanted, but I didn’t want to lead her on and make promises I couldn’t keep. I ended it, and she was angry. She cried a lot. I told her I didn’t want to hurt her. Actually, that was why I was breaking up with her. I could tell if things kept going, she would just be more hurt down the road. She seemed pretty upset, and I didn’t know if we’d be able to leave things in a good place, even though I wanted to. I was kind of scared she would just hate me forever.

But then, she called me a few days later and wanted to talk some more. So we met up in person and talked for a long time. She told me why she was hurt, and I listened. I also told her all the things I knew I would miss about her. And she said she was going to miss me too. When we said goodbye she wasn’t crying anymore. She seemed calm and like maybe she understood my decision better. I thought we left things in a good place.

A few days ago I noticed that she unfriended me on Facebook and unfollowed me on Instagram. When I looked more closely, I saw that she had deleted every picture of me from her Instagram. It kind of shocked me. My ex loved to post pictures of us and there were a LOT of them. So it’s not like this was a quick thing. She must have taken like an hour going through her whole feed to erase me.

I honestly feel kind of pathetic admitting that I noticed it. But it made me feel really sad. And I guess I’m surprised at how sad I’m feeling. I never posted as much as she did. But now that all those pictures are gone, it feels like maybe I didn’t matter to her as much as I thought I did. And I guess, even though it wasn’t my style to post a lot, having her post made me feel special.

I know she doesn’t owe me anything. I probably won’t ask her about this. I know she’s still hurting and I don’t want to piss her off. But I feel like I’m going crazy trying to understand why she did this. We had a nice conversation and she told me she hoped we’d be friends in the future. She even said I’d always be in her heart. I’m not a bad guy. I never cheated on her. I’ve been there for her during this breakup. So why is she erasing me? Is there something I missed?

Not a Bad Guy

Dear Not a Bad Guy,

You say your ex doesn’t owe you anything, but as I read your letter, I heard a question recently made popular by The Good Place ringing in my ears: “What do we owe to each other?”

It’s a tough question to answer, as illustrated by Chidi, the show’s resident philosopher who lectures Eleanor, the show’s resident troublemaker, for three hours on the topic. The Good Place is set in a world where “good” deeds and “bad” deeds are constantly measured and tallied, and enough good deeds get you the very tangible reward of going to the titular good place when you die. But, as the show’s many conflicts illustrate, the system is messy and faulty. And characters like Chidi and Eleanor go through many trials and tribulations as they try to figure out how to be good to each other when by all accounts, the system seems to be broken.

According to T.M. Scanlon, a Harvard philosopher and the author of the text that Chidi references, morality is based on our relationships and the agreements we make in those relationships. Scanlon calls this system of moral reasoning contractualism. If you subscribe to his philosophy, you’re doing the right thing when you pursue your own interests in a way that does not harm others who pursue their own interests. In other words, we all have the right to do what we want to do, but we should do so while honoring the agreements we’ve made to others. From your point of view, you were not going to be able to honor the interests of your ex-girlfriend, and so you did the “right” thing by terminating the social contract of your relationship.

I would say that even if you were unable to give your ex what she wanted, you gave her what you owed her: respect for her interests. While she may have been hurt and angry and unhappy with your decision, it sounds like in return, she gave you what you were owed: your freedom.

Which makes me wonder, what do we owe to each other once our debts have been paid? Does your ex really owe you nothing? And do you owe nothing to her? If her call for communication and understanding had been met with stony silence, would you have been doing the right thing so long as it matched your personal interests without impeding on hers?

I’m not so sure. As long as others have shown they’ll treat us with care, as long as we can afford to offer our kindness without harming ourselves, don’t we still owe each other basic kindness? Isn’t that why you showed up for that second conversation? And isn’t that why, right now, faced with the prospect that your ex has willingly and painstakingly erased you from her digital life, you feel so flummoxed? Does it feel the teensiest bit cruel?

But here’s the thing. It isn’t. Here is what your ex doesn’t owe you: a shrine to your goodness.

She is no longer your partner. And so, it is not her job to make you feel good about who you are or what you do. She does not have to assure you that you are a “good guy,” nor is it her duty to make you feel secure in the choices you’ve made. “But I didn’t ask for that!” you might argue. But aren’t you missing it? When you say you’re startled by your sadness, aren’t you saying you’re surprised that you have to feel the weight of this loss, too? I would argue that the sadness you feel is part of the new agreement you and your ex made when you decided not to be together. Even in being apart, you are having a shared experience because you are both experiencing the loss of a relationship. So what you owe to each other now is the space and time necessary to heal.

I understand that, from your point of view, you did the kindest thing you could by ending your relationship with your ex. But you left her with the pain of a significant loss. You don’t spell it out in your letter, but it sounds like you and your ex were on the verge of making some big life decisions. Maybe she envisioned you moving in together. Or maybe she wanted the promise of marriage or a family. When you exited the relationship, you didn’t have to be aggressively “bad” or cruel to hurt her. You hurt her just by leaving. And maybe, as someone who wants to badly to be a good guy, that’s a tough pill to swallow. Perhaps, just as this feels cruel to you, your leaving felt very cruel to her.

Here is the thing about doing what’s right: We don’t necessarily get visible rewards for it. Unlike Instagram, where we can watch the likes and comments pour in on a well-curated post, in reality, we have to simply see our choices through. So right now, instead of worrying about whether she hates you or if her digital erasure signals some deeper resentment, I think you should follow your instinct to let your ex be. Don’t reach out to her for an explanation. In all likelihood, she is simply doing the best she can to make herself feel confident and powerful in a moment of painful loss. If you really want to be good, don’t ask for anything. But give. Give her time. Give her space. Give her kindness. If you can continue to give her all of these, without expecting any kind of reward, then in my book, you’ll be doing good.