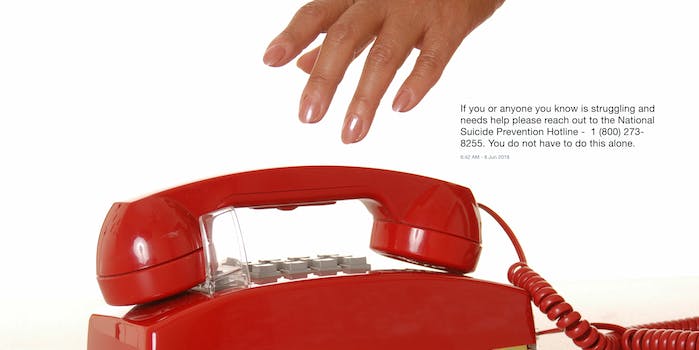 Don't expect those in the depths of depression to reach out.

Whenever someone in the public eye has ended their lives, the first thing most people say is, “Wow, this is so tragic. Reach out if you need help. Here’s a suicide hotline phone number. You are not alone.” Then, presumably, these people move on with their day, perhaps thinking they have done all they can do.

“Here’s the suicide hotline number” has become the new “My thoughts and prayers are with you.” It may be well-intentioned, but it also ignores so many of the issues surrounding suicidal ideation and depression.

First of all, it’s already extra hard to struggle with depression and/or suicidal ideation at a time when so many people are taking their own lives. Even if you haven’t had those thoughts in years, it is totally possible to see everyone posting about suicide and have those thoughts suddenly reignited. And now, here you are again, back in the ring, fighting with your own mind, which can be a very formidable opponent. Worse still, every message you see from people talking about suicide makes you think, “Yeah, but you don’t get it.” Because so many people don’t.

And then you see those words “Here’s the number for a suicide hotline,” and you may think, “Cool… so you don’t want to deal with people in pain, but you’ll gladly pawn them off on someone else?” And granted, the person who posted the hotline number might want to help but thinks they don’t have enough knowledge or expertise to help you. And in some ways, they’re wrong.

For everyone telling people to call a suicide hotline like it’s a magic answer, like people just aren’t remembering to do it, years ago, on a very difficult night for me, I called a suicide hotline and had such a horrible experience that left me feeling worse than I did before. The next day I did this stand-up set about what happened when I called:

If you’re already feeling that low, and like you have no one you can talk to, so much so that you have to call a stranger who knows nothing about you and tell them how you’re feeling, and then you’re put on hold and told to check the website, and then you somehow survive that on your own, uhhhh, yeah, I’d say we’ve entered thoughts-and-prayers land because that shit was not helpful for you. Granted, I’ve heard from some people that hotlines really helped them and I’m so glad they did! But I’ve also heard from others who said they were hung up on, treated harshly, or brushed aside, and that is devastating to think about.

Suicide hotlines aren’t a catch-all life-saver, because no one thing is. But also, do you know how hard it is for people to reach out when they’re that low? So, so, so hard. Oftentimes, even when you do reach out to friends, they’re either stumped, so they say nothing, or they say something careless or make a joke, and it feels like emotional knives.

I want to believe people want to help their friends in these situations and they just don’t know what to say to them, which is why I’m saying this now: Reach out to your friends if you see them posting things that seem like they’re not OK, or if you haven’t heard from them in a while. We can’t keep thoughts-and-prayers-ing away depression. It is such an isolator that one of the best things we can do to support our friends going through it is to rally and hold space and surround them with love—whether they can ask for it or not.

Lane Moore is a comedian, writer, actor, and musician. Her book How to Be Alone: If You Want to and Even If You Don’t comes out on Nov. 6, and you can pre-order it now. Follow on Twitter @hellolanemoore and Instagram @hellolanemoore.