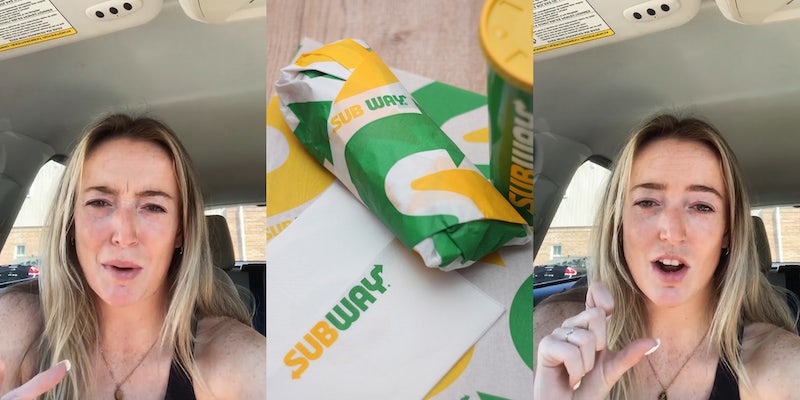 ‘In between the two wrappers on the sandwich is literal sh*t’: Subway customer claims they found feces in their sandwich

Update 10:22am CT, Sept. 13: A spokesperson for Subway told the Daily Dot in a statement that “as soon as the restaurant was made aware of the situation, the franchisee worked with local authorities, including the police and health department, to look into the alleged claim.”

“On Monday, September 12, the local health department released its inspection report, concluding that the remnants seen on the sandwich wrapper were chocolate from a cookie and the case has since been closed,” the spokesperson said.

Original story: A user on TikTok has gone viral after alleging they found something resembling feces in their Subway sandwich.

In a video with over 486,000 views, user Kels (@kelscoyne) claims she took a bite of the sandwich only to later realize that it had a foul smell. Upon further examination, she concluded that her sandwich contained fecal matter—or at the very least, something that does not belong in a Subway sandwich.

In the video, Kels says that she purchased the sandwich from the Subway location on E Grand River in East Lansing, Mich. When she got to the parking lot to eat it, she noticed that the parking lot smelled like sewage. Because of this, she took a single bite before opting to bring the sandwich home and eat it there instead.

Arriving at home, she went to eat her sandwich—only to notice the same putrid smell.

“[I] look in the papers. In between the two wrappers on the sandwich is literal shit. There’s feces,” Kels claims.

She then called the police, who took a swab of the substance in question to determine its contents. A video of the police interaction was also posted to her TikTok page.

In another video, she showed the feces-like substance.

This video led users to speculate whether the foul-smelling contents were, in fact, feces.

“I worked at subway for like 5 years. That’s what happens when it’s toasted if the oven mat isn’t cleaned properly.. it could be burnt sauce or…Anything,” one user wrote. “I definitely think you’re over reacting.”

“Baby g I work at subway that’s from toppings / cheese being burnt in the toaster,” another agreed. “Not sure why it smells bad but I can tell u from this vid it’s not [feces].”

Kels was sympathetic to this argument, saying that it is totally possible that the substance is not feces. However, she insists that, no matter what it was, it does not belong in a Subway sandwich.

“That’s what we were hoping,” she replied to a comment suggesting the substance was simply burnt toppings or cheese. “We went through the entire menu trying to find a sauce or something, problem was it was cold and moist, and the smell was…so bad that it lingered in my apartment afterwards we needed a candle.”

Others questioned why alleged Subway employees were defending the substance.

“Y’all subway workers saying this is from them not cleaning… I’ve worked in fast food and restaurants for a decade. No food should ever smell like [feces],” one TikToker stated. “…if it actually smelled like you described it, that was not food or something that should never been near food.”

“As someone who cleans shit on a daily (CNA/Mom) that is shit,” a second added. “Y’all are ignorant as hell with these comments.”

Kels says that she is consulting with a lawyer about the situation in the coming week and that Subway has yet to resolve the issue with her.

The Daily Dot reached out to Kels via Instagram DM.

Update 3:43pm CT Sept. 10: In an email to the Daily Dot, a Subway spokesperson provided the following: “Subway and our network of franchisees take health and food safety extremely seriously. While Subway restaurants are individually owned and operated, we have been made aware of this situation and are working with the franchisee to look into the alleged claim.”