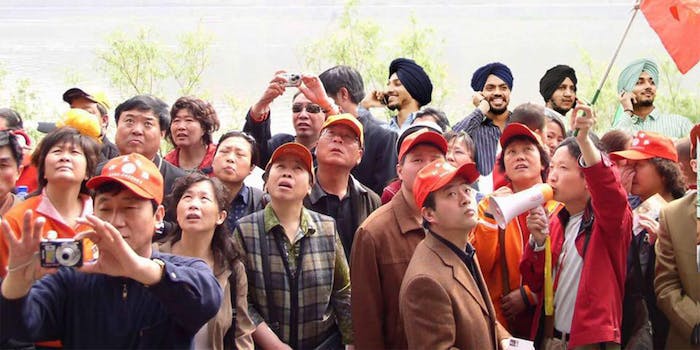 In this Facebook group, South Asians are being told they’re ‘not Asian’

Critical conversations about Asian identity were underway last week in a Facebook group called Subtle Asian Traits and its sister group, Subtle Curry Girl Traits. The comment threads shined a light on colorism in the Asian community and how stereotypes vary in different parts of the world but ultimately have the same harmful effects.

Last year, Subtle Asian Traits ballooned to a massive online safe-space for Asians around the world. The page has over 1.5 million members, and it’s where many in the Asian community bond over culture-specific foods and complaints about parents via text posts and memes that, yes, sometimes border on internalized racism. But controversy exploded in the group last week with an argument about who really qualifies as “Asian.”

It all started when Bangladeshi-American Audrey Barikdar shared a screenshot of an earlier comment thread in the group. In the thread, one person told another that they’re not Asian because they’re brown.

“Cmon dude lol your [sic] brown,” one person says. “Dont [sic] give me that ‘India is in Asia’ shit, you know in your heart of hearts when people say asian that’s totally not what they mean lol.”

The message was clear: If your skin is darker, you’re not welcome to identify as Asian—or with other members in the Subtle Asian Traits group. That message, however, disregards simple facts and embraces a distorted view of Asian identity.

First, a quick geography lesson: The continent of Asia refers to 49 countries, starting east in the Philippines and stretching as far west as Saudi Arabia. A lot of West Asian countries, such as Saudia Arabia, Syria, Yemen, fall under the “Middle East” band, which is not a continent but what experts call a “postwar European imperialist” concept that includes some parts of Asia and some parts of Northern Africa. Meanwhile, countries including Afghanistan, India, and Pakistan are lumped together as “South Asia.” Regardless of the subcategories, all of these countries undoubtedly belong to the continent of Asia.

The comment thread in the Facebook group, however, shows that some people completely missed the memo that Asia isn’t made up of only East Asian countries. It also magnifies an ongoing problem of anti-brown discrimination, or colorism, against Asians by Asians.

“I made a comment about how it’s funny how we aren’t accepted as Asian in Subtle Asian Traits unless a famous person (that is, South Asian) says they are Asian,” Barikdar told the Daily Dot, adding that she worried her post would be “controversial” but shared it in the group anyway as “a good way to start a conversation of something that happens in that group a bit frequently.”

Over in the Subtle Asian Traits group, she called people out directly.

“Sentiments like this are really funny because as South Asian, we aren’t seen as ‘Asian enough’ … This space isn’t that friendly to South and Southeast Asians,” Barikdar wrote in Subtle Asian Traits. “I’m not saying it’s everyone but some of the ignorance on this page is wild lmao but also shoutout to y’all that are really kind and inclusive.”

Within 12 hours, Barikdar’s post generated more than 1,300 comments. Admins eventually shut down the thread, though it’s unclear whether it was because the conversation was getting too dicey. The group’s admins did not respond to the Daily Dot’s request for comments.

Both in comments and in interviews with the Daily Dot, other South Asian members of the Facebook group expressed feeling invisible anytime the topic of Asian identity comes up.

“In society, when people think Asian, they think East Asia only—light skin black hair—so when they say Asian they only mean to refer to East Asia, they don’t consider that Asian is an entire continent made up of more than three countries,” one user, Vatsala Adile, told the Daily Dot.

Samantha Choong, who engaged in the thread in support of Barikdar’s argument, says she also notices a glaring lack of representation of South Asians in pop culture.

“Especially in recent years, where Asian-Americans have been more vocal about wanting more representation on Western media, and in fact getting what they’ve asked for, it’s ironic that these same people could turn around and attempt to push down South Asians who are seeking the same validation and representation,” Choong, who is Chinese and from Singapore, told the Daily Dot.

A lot of users described the “anti-brownness” harbored by members of the Subtle Asian Traits group.

“Some people are disgusting… how are you going to tell someone not to identify as their rightful ethnicity?” one user wrote in the group, later adding, “This is an all inclusive group and honestly if you can see it like that I guess you should just go somewhere else.”

The Facebook groups aren’t the first time the idea of colorism among Asians has come up on a major platform recently. Critical dialogue on the issue followed the hype of the 2018 rom-com Crazy Rich Asians.

The movie, billed as a hallmark of Asian representation in Hollywood, was criticized for neglecting brown Asians in the movie. Singaporean-Indian activist Sangeetha Thanapal said when it was released, “The few brown people featured in [the film] are seen in service positions to the glamorous and wealthy Chinese characters. The dominance of East Asia in the worldwide imagination of who constitutes the idea of Asia is troubling, especially since brown Asians make up a sizable portion of the continent.”

As writer Mark Tseng-Putterman wrote in August 2018, while the cast itself was made up of Korean, Chinese, and Japanese actors, Crazy Rich Asians “effectively excludes South and Southeast Asians.”

“The scene in which Rachel and Peik Lin drive up to the Youngs’ remote estate and are shocked by the sight of two turbaned, South Asian guards—armed with what appear to be bayonets, no less—seems a particularly apt metaphor for the brand of Asian American representation Crazy Rich Asians provides: one in which too many are left on the outside, looking in,” Tseng-Putterman explained.

The problem of colorism in the Asian community is complex, widespread—and just as subtle as Subtle Asian Traits. Choong says prejudice is sometimes so ingrained in the culture that it’s difficult for many to see.

“Perhaps an admittance for those who might deny it, Chinese/Japanese/Koreans are raised in very subtly racist environments,” she told the Daily Dot. “Especially in those countries where their majority population is of their ‘own kind’ and they have a rare exposure to those who are ‘different.’”

As people in the Facebook comment threads also pointed out, perceptions of other Asians can vary from country to country. For example, some said, the division of Asians as “East Asians” and “South Asians” exists largely in the American imagination of Asia. In the U.S., “Asians” refers to East Asians, and many consider South Asians to be just “Indian.” Commenters said it’s the opposite in the U.K., where “Asian” means people who in the U.S. would be categorized as South Asians, while East Asians are racistly generalized as being either “Chinese” or “Japenese,” if they’re not from those countries.

People in the Asian Traits groups joked about the similar stereotypes of people across the continent, like strict parents and love for rice. But stereotypes or not, some argued, Asians from different countries have plenty in common.

“If you look past the fact that people who are ‘brown’ look different, there’s far more in common all across Asia between people—parents, rice, mannerisms, etc.—than there are [differences], so it’s ridiculous to not realize South Asians are Asians given the geographical, historical, and cultural ties,” Shahriar R. Siddiqui, a Bangladeshi based in Canada and active member of Subtle Asian Traits, told the Daily Dot.

The intersection of identity and language is so layered that Facebook comment threads can’t possibly address all the complexities. But the comments showed that at the core of the issue, most Asian members of the groups just want to be seen for who they are. The fact that “Asian” means a different community in the U.K. than it does in the U.S. is a reminder that the terms are facilitated by imperialist societies—and it just varies from continent to continent who feels left out.

Adile, who is Indian and lives in Saint Peter, Minnesota, put it poignantly in her conversation with the Daily Dot. “Every single continent of the world have countries where people look different,” she said. “So why is Asia only represented by a few countries?”