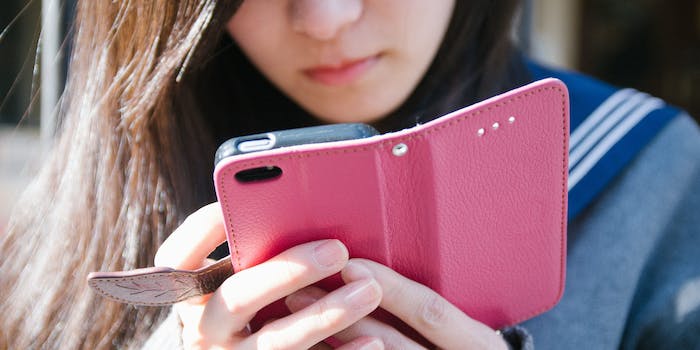 Girls feel conflicted over the pressures of 'flirting' vs. asserting bodily autonomy.

Sexting isn’t always consensual, and more often than not, teenage girls are pressured to join in. A new study from Northwestern University reveals that many young women feel “overwhelmed, confused, tired,” and “bombarded” when asked to send nude or semi-nude photos of their bodies.

The study, which focuses largely on sexual relationships between teenage girls and boys, found that 15 to 25 percent of all teens engage in sexting, but teenage girls largely feel trapped over the pressure to say yes or no to sending nudes. While analyzing more than 460 self-reported stories from the website AThinLine.org, author Sara Thomas found young women said sending sexual images left them feeling disempowered because they were forced to choose between their bodily autonomy or having a romantic relationship.

“Young women face multiple, often conflicting, pressures to both send and refrain from sending sexual images,” Thomas writes in the study. “Pressures to send photographs came from a desire to gain relational benefits as well as from direct requests from young men in the form of assurances of love and trustworthiness, persistent requests, anger displays, harassment, and threats.”

The study also found that most women were reacting to young men, not initiating requests for nudes. In these cases, teenage boys not just controlled the relationship but coerced young women into sending explicit images. Young women were largely too scared to ask adults for help, in part because of embarrassment, fear, and legal consequences. And because young women are considered “more responsible for sexual decision-making,” many teens felt like they had to manage the coercive behavior instead of calling it out.

“The consequence of young men setting the relationship agenda was a loss of middle ground between flirting and unprecedented access to women’s bodies,” Thomas says. “Nowhere was this more evident than in stories of young women who did not think they had the right to deny access to photographs because of previous acts of flirting.”

Thomas also found that young women largely know about sexting’s risks, but the pressures they feel to send sexual images of their bodies supersedes these concerns. This suggests that criminalizing sexting isn’t necessarily the right answer, but rather, preventing teenage boys from engaging in coercive behavior may help young women from feeling pressured to send photos that they don’t want to in the first place. Educators must also create environments that give women the social tools necessary to both navigate sexual aggression and receive support in identifying it.

“Controversy continues to surround policies aimed at sexuality education, yet young women in this study overwhelmingly asked for support in negotiating pressures they faced in their romantic relationships,” the study explains.
H/T Futurity
Share this article