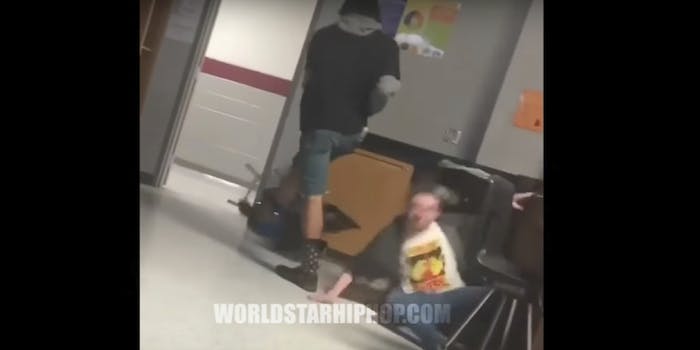 The attack was caught on video.

A video went viral Tuesday showing a Maryland student kicking a chair out from beneath his classmate who refused to stand during the Pledge of Allegiance.

In the video, the student responsible for the kick is seen wearing a shirt with an American flag on it, cowboy boots, and jean shorts. The student who is seated and then knocked to the ground has dyed green hair and is wearing skinny jeans and a hoodie.

The knocked-down student eventually stands back up and says, “really?” while the student who kicked him stands with his hand on his heart and continues to recite the pledge.

Before the video cuts off, an off-camera person begins to issue a reprimand: “OK. You’re gonna get…”

According to the Carroll County Times, both students attend Winter Hills High School in Westminster, Maryland. The Times reported that the student responsible for the kick was disciplined after he posted the video of the incident to Instagram.

“Some people don’t understand how disrespectful it is to sit during the pledge or national anthem and deserves to get there ass kicked,” the student posted. “More of y’all need (stand up) to these jackasses that sit during the pledge.if you have an issue with what I did today talk to me about it not your little buddy’s behind my back. #standthef***up #america #dumbass #hedeservedmore #bitch”

The pledge is recited during morning announcements at Carroll County public schools. However, students are not required to stand during it, the Times reported. In 1943, the Supreme Court ruled that the First Amendment protects students from being forced to stand or salute the flag during the pledge.

The sitting student also made a statement on social media, according to the Times.

“I was practicing my right to free speech, a right given to me by the soldiers that I do respect,” the student wrote. “So I invite all to join me tomorrow, and #sitthef***down if you believe that free speech is a fundamental right of the people, and that it should be protected.”

The students’ arguments echo an ongoing national debate about NFL athletes kneeling during the national anthem, which was first done in protest against racism and police brutality.

The director of student services at the school system, Dana Falls, told the Times that the now-disciplined student’s behavior was “unacceptable.” Due to student confidentiality laws, Falls did not disclose what specific punishment the student received.

Falls said that since it is a standalone incident, the school would not be involving law enforcement or considering it to be bullying.

“In my opinion, based on what I know about the initial incident … that would be considered an unsafe behavior or disrespect to the student,” Falls said. “If it continued, it would absolutely be considered bullying.”