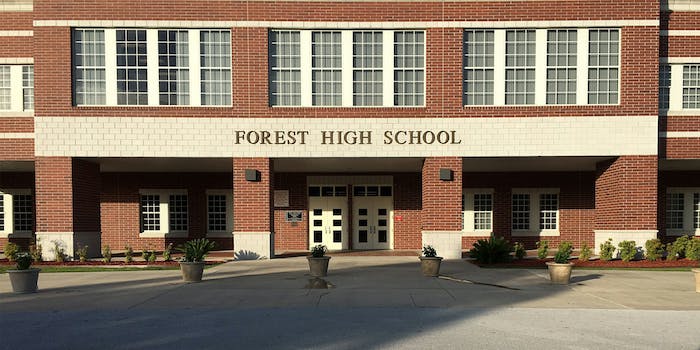 It's also the anniversary of Columbine.

As thousands of students marched out of their classrooms for a #NationalSchoolWalkout Day on Friday, a student was shot and wounded while at school.

The student attending Forest High School in Ocala, Florida, was shot in the ankle, according to reports from CNN. The suspect is now in custody and other students have been bused to First Baptist Church of Ocala to be reunited with their parents.

While students at the high school—and the rest of the school district—shared that their walkout was canceled because of the shooting, gun control advocates on Twitter noted the tragic irony that the same violence these students planned to protest stopped their actual protest. The national walkout also marks the 19th anniversary of the Columbine High School massacre, when two students killed 13 people and injured 24 others.

A school shooting on the day of a #NationalSchoolWalkout to remember students killed during a school shooting. How fittingly grim. https://t.co/7224nDjv7j

Some students can't participate in the #NationalSchoolWalkout because they are barricaded in.

This is a photo from Forest High School in Ocala, Florida where a shooting occured this morning. https://t.co/4rYM0XWYwS

Another school shooting happened today which is why I will walkout.#NationalSchoolWalkout pic.twitter.com/y7HUXVXa9g

It’s #NationalSchoolWalkout and my school is on lock down because of school shooting at forest high school pic.twitter.com/ezyroqoA2k

Another school shooting in FL. 😭#NationalSchoolWalkout is for this reason. Our kids aren’t safe in schools.

Politicians need to listen to our kids! Refusing to make #GunReform a priority makes every legislator an accomplice to these shootings. https://t.co/dbSgj14SOC

during my school’s 17 minutes of silence, there was a school shooting in florida. one person is injured. god help us. #NationalSchoolWalkout