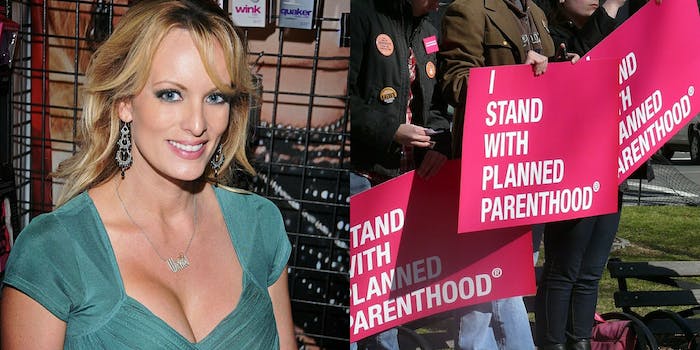 She will also make the donation in his name.

Stormy Daniels plans to donate $130,000 to Planned Parenthood if she wins her defamation lawsuit against President Donald Trump and his lawyer Michael Cohen—and make the pledge in their names.

According to the Daily Beast, Daniels’ May 8 Penthouse magazine cover will deem her the “Penthouse Pet of the Century,” but will also reveal the NSFW bits that 60 Minutes left out of her interview and her plans to donate her winnings to the healthcare provider that Trump and congressional Republicans have attempted to federally defund.

“We are really excited to have Stormy back on the cover of the magazine,” Kelly Holland, CEO and owner of Penthouse, told the Daily Beast. “She was a Penthouse Pet back in 2007, so we have a history with Stormy, and she has a good relationship with us.”

“The Trump-Pence administration has spent more than a year cutting back access to birth control, eliminating protections for survivors of sexual assault, and trying to prevent patients from coming to Planned Parenthood for care—a trusted health care provider that 2.4 million people rely on each year, where one in five women will come for care in her lifetime. Ms. Daniels joins more than 11 million Americans who support Planned Parenthood. We’re glad to see Ms. Daniels recognize the importance of access to reproductive health care, even if the Trump-Pence administration does not.”