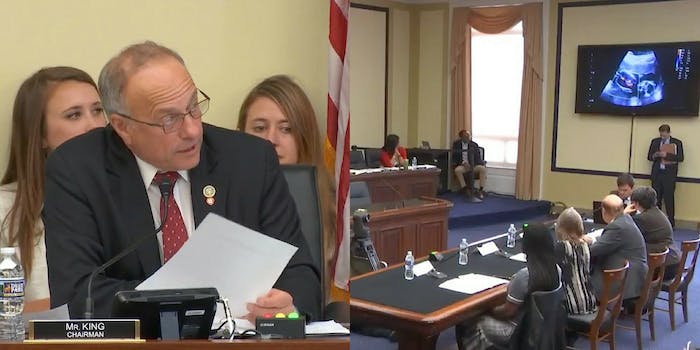 'Looks like Rocky at the top of the steps.'

How much of a dog and pony show will Republicans put on to peddle their anti-abortion legislation? Just ask the sonogram equipment that Iowa Rep. Steve King placed in the front of the room during Wednesday’s subcommittee hearing for H.R. 490, the Heartbeat Protection Act of 2017 that would criminalize abortion after six weeks.

At the hearing, King, the Constitution and Civil Justice subcommittee chairman, not only gave the equipment a prime seat, but he narrated a sonogram of the pregnancy of the woman seated to the machine’s left, which was taken earlier in the day by the technician seated on the machine’s right.

King commented that the pregnancy, a fetus already named Lincoln Glenn Miller, “may be a musician one day. We don’t know…who he’s named after.”

House Republicans saved a front-row seat in the hearing on an abortion ban for … a sonogram. #NoAbortionBan pic.twitter.com/02dfHcJVan

King then had the sonogram played on the screen to the left of the subcommittee, and had just so much to say about the fetus, which was older than six weeks. (Let’s break here for a minute to point out that absurdity of this bill starts with the assumption that women even know they are pregnant before six weeks—most have to skip a period to figure it out. Then let me point out that sonograms taken so early during a pregnancy are done with a transvaginal ultrasound, not pelvic as shown in the video.)

So yes, at a hearing for an abortion bill that would criminalize procedures after six weeks, the ultrasound King used to demonstrate the validity of the bill was further along than the cutoff period for pregnancies under the bill itself.

Anyway, here’s what King said when he tried to coax little fetus Lincoln in a video recording to do a song and dance for the room:

“In a little bit, you’ll see Lincoln begin to move. Now he’s moving. There that little guy is. See his face and his hands, there’s his arm and his face. Wonder if Lincoln’s gonna move that arm and show us how active he can be. Pretty sure McKenzie [the mother] knows how active he can be. There’s a good shot at him. Looks like Rocky at the top of the steps. Move that arm, will you, Lincoln? Show us how busy you are and how you’re exercising now—there you go. Suck your thumb! Ok. Get a little hiccup.”

Then, in a true lapse of reality, King took on the identity of the fetus, and pretended he was Lincoln:

“‘That thumb is good but I can’t wait to be born and see what this world’s like out here.'”

Earth to Lincoln—it’s pretty fucking awful out here. King then proceeded to wrap up his monologue with a fun reference to slavery and emancipating the fetuses, or something.

“There he is again. Is he talking to us? [Laughs,] little guy. Just watch Lincoln here. Now he’s muchin’ away on his hand. Look at that little guy…I’m partial to Lincoln myself. I like that name. That says a lot about freedom and emancipation. I heard Star Parker’s testimony about the emancipation of the slaves and it’s time to emancipate every little unborn baby.”

In conclusion, King said, “If a heartbeat is detected, the baby is protected.”

Ahh, yes, the “if it doesn’t fit, you must acquit” of anti-abortion legislators.

Watch King make an idiot of himself in the clip below: