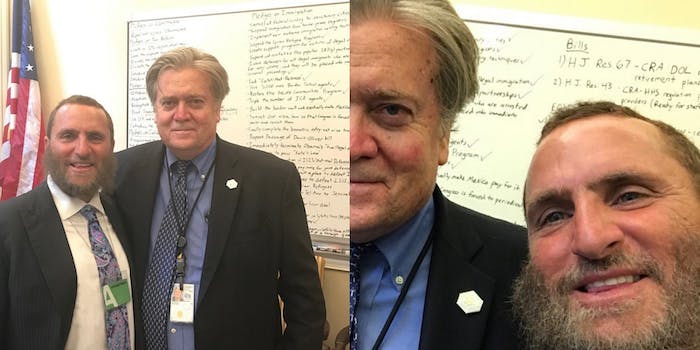 At least one item on the lists could cause problems for the Trump administration.

If you’re going to have your picture taken, it’s probably a good idea to check what’s in the background—especially if you’re standing in the White House.

Steve Bannon, President Donald Trump‘s chief strategist, discovered this little trick about photography this week after Rabbi Shmuley Boteach shared photos of his visit to 1600 Pennsylvania Ave. on Israel Independence Day that showed portions of his giant list of “pledges” written on a whiteboard.

With @SteveBannon in the White House on #israelindependenceday. Steve is a great, stalwart friend of the Jewish State pic.twitter.com/PFxSCK7blc

With Steve Bannon and Debbie at the White House on #IsraelIndependenceDay2017. Thank u Steve for your love of Israel pic.twitter.com/xrU4nLUyYU

The internet, of course, began scouring the list for clues about what the Trump administration plans to do next. Alas, most of the items on the lists are either common knowledge or entirely unsurprising. (For example, supporting the “Davis-Oliver bill,” a piece of immigration enforcement legislation, aligns with the administration’s hard line on illegal immigration.) Others have already been accomplished and, thus, their existence known—but there are a few that are cut off and leave room for interpretation. “Build the border wall and eventually make Mexico…” could end a number of ways, but “pay for it” is the most obvious option.

There is one item, however, that may prove consequential: The first item on the “Pledges on Immigration” list —“Cancel all federal funding to sanctuary cities”—could potentially impact ongoing litigation against a Trump executive order that seeks to deprive cities that refuse to enforce U.S. immigration law of federal funds.

In a federal lawsuit over the sanctuary cities executive order filed by the city of San Francisco and county of Santa Clara against the Department of Justice, DOJ attorneys argued that the federal government is only attempting to deprive sanctuary cities of only limited funds. Bannon listing the goal to “cancel all federal fund to sanctuary cities,” then, could undermine that argument.