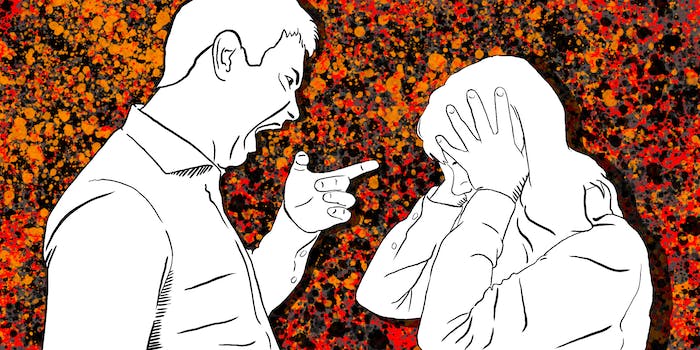 Treating women like s**t is something nearly all mass shooters have in common.

On Tuesday, the Los Angeles Times provided some insight into the relationship of Las Vegas shooting gunman Stephen Paddock and his girlfriend, Marilou Danley—a dynamic that wouldn’t surprise many who’ve ever followed how mass shooters treat women.

According to the Times, staff at a Starbucks inside the Virgin River Casino in Mesquite, Nevada, would “wince” when they saw Paddock and Danley in line. The 64-year-old often berated Danley in public, Esperanza Mendoza, the coffee shop’s supervisor, said. The verbal attacks would happen when Danley would ask her boyfriend for his casino card to make their purchase.

“He would glare down at her and say—with a mean attitude—‘You don’t need my casino card for this. I’m paying for your drink, just like I’m paying for you.’ Then she would softly say, ‘OK’ and step back behind him. He was so rude to her in front of us,” Mendoza said.

While Paddock’s brother Eric told the New York Times that “she was probably one of the only people I’ve ever seen that he’d go out of his way to do a little thing for” and that “he waited on her sometimes,” he also implied Paddock wasn’t a swell guy: “He would defer to her in the way that he wouldn’t to the rest of humanity. Even me.”

It’s clear that Paddock’s reported behavior toward Danley isn’t just an indicator of his own character or misogynistic attitude—it also follows a pattern of men who commit mass violence being alleged shitheads to women.

In 2014, 22-year-old Elliot Rodger killed six people and injured 14 others in a killing rampage in Isla Vista, California, as revenge for what he felt was sexual rejection from women. In a video posted on social media detailing his “retribution,” Rodger said he would punish girls who weren’t attracted to him, calling women who choose to “throw themselves” at “obnoxious men” over himself a crime and injustice.

“I will punish all of you for it. On the day of retribution, I’m going to enter the hottest sorority house of [University of California, Santa Barbara]. And I will slaughter every spoiled, stuck-up, blond slut I see inside there. All those girls I’ve desired so much…I’ll take great pleasure in slaughtering all of you,” Rodger said in the video. “If I can’t have you, girls, I will destroy you. You denied me a happy life, and in turn, I will deny all of you life. It’s only fair.”

Omar Mateen, who killed 49 people and injured 58 in last year’s Pulse nightclub shooting in Orlando, was reported as having no record of previous hate crimes. However, his ex-wife Sitora Yusifiy came out with allegations of domestic abuse that resulted in a hostage situation. After four months of marriage in 2009, she said her family had to rescue her after he’d frequently beat her and not allow her to speak to them.

Seung-Hui Cho, who killed 32 people and injured 17 others at Virginia Tech in 2007, had a history of stalking female classmates. Sandy Hook shooter Adam Lanza had a document on his computer explaining how “females are inherently selfish.” Planned Parenthood shooter Robert Dear Jr. was accused by two of his ex-wives of physically abusing them, and he was arrested in 1992 for sexual violence and rape (there are no records of his conviction, however).

Across Twitter, commentators pointed out this correlation between mass violence and violence against women, as well as the fact that a majority of mass shootings are done by white men.

It strikes me one thing many mass shooters like Stephen Paddock have in common is that they're horrible to women. https://t.co/rSMXDtVcdK

Uh is he a man? K then he fits the mass shooter profile bc that's the one thing they all have in common.

How to spot a mass shooter: He abuses women. https://t.co/eRf3kuZjJT

abusing women seems to be the most common thread between mass murderers. https://t.co/DDuGbF3Xtr

Most of these tweets exhibit a lack of surprise at finding that Paddock was, at the very least, unkind to his girlfriend in public. In other words, it seems misogynistic behavior from a mass shooter is now just as normalized as mass shootings themselves.