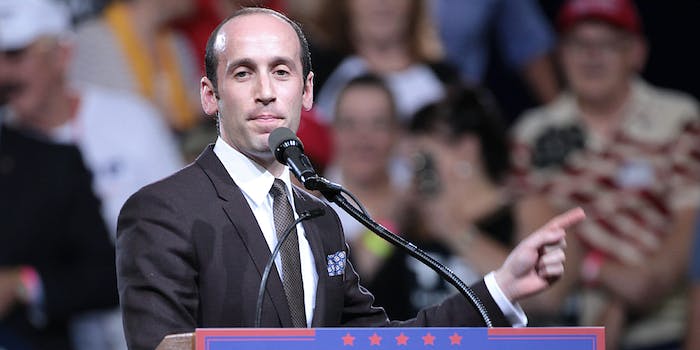 Ever since President Donald Trump‘s family separation policy exploded publicly, the alleged chief architect behind it, Stephen Miller, has been on the receiving end of some very public scorn.

Typically it’s been from strangers approaching Miller, but today, the vitriol is coming from inside the Miller house. In an op-ed published in Politico on Monday, Miller’s uncle called the Trump adviser a “hypocrite” on immigration.

In it, retired neuropsychologist Dr. David Glosser, who is Miller’s mother’s brother, tells the tale of an immigrant family using chain migration to make it to the United States. The family, from Belarus, escaped anti-Jewish pogroms in the early 1900s to make a life for themselves.

The family that he’s talking about? The Millers.

I shudder at the thought of what would have become of the Glossers had the same policies Stephen so coolly espouses— the travel ban, the radical decrease in refugees, the separation of children from their parents, and even talk of limiting citizenship for legal immigrants— been in effect when Wolf-Leib [Glosser] made his desperate bid for freedom. The Glossers came to the U.S. just a few years before the fear and prejudice of the “America First” nativists of the day closed U.S. borders to Jewish refugees. Had Wolf-Leib waited, his family would likely have been murdered by the Nazis along with all but seven of the 2,000 Jews who remained in Antopol. I would encourage Stephen to ask himself if the chanting, torch-bearing Nazis of Charlottesville, whose support his boss seems to court so cavalierly, do not envision a similar fate for him.

Glosser also tells the tale of an immigrant from the Eritrea, who escaped strife and famine, and is now thriving in the U.S.

Joseph, Glosser said, was tortured after being conscripted as a child soldier when he was 14.

President Trump wants to make us believe that these desperate migrants are an existential threat to the United States; the most powerful nation in world history and a nation made strong by immigrants. Trump and my nephew both know their immigrant and refugee roots. Yet, they repeat the insults and false accusations of earlier generations against these refugees to make them seem less than human.

You can read the entire op-ed over at Politico. It is fire.

But yes, everyone made the same Thanksgiving joke already.