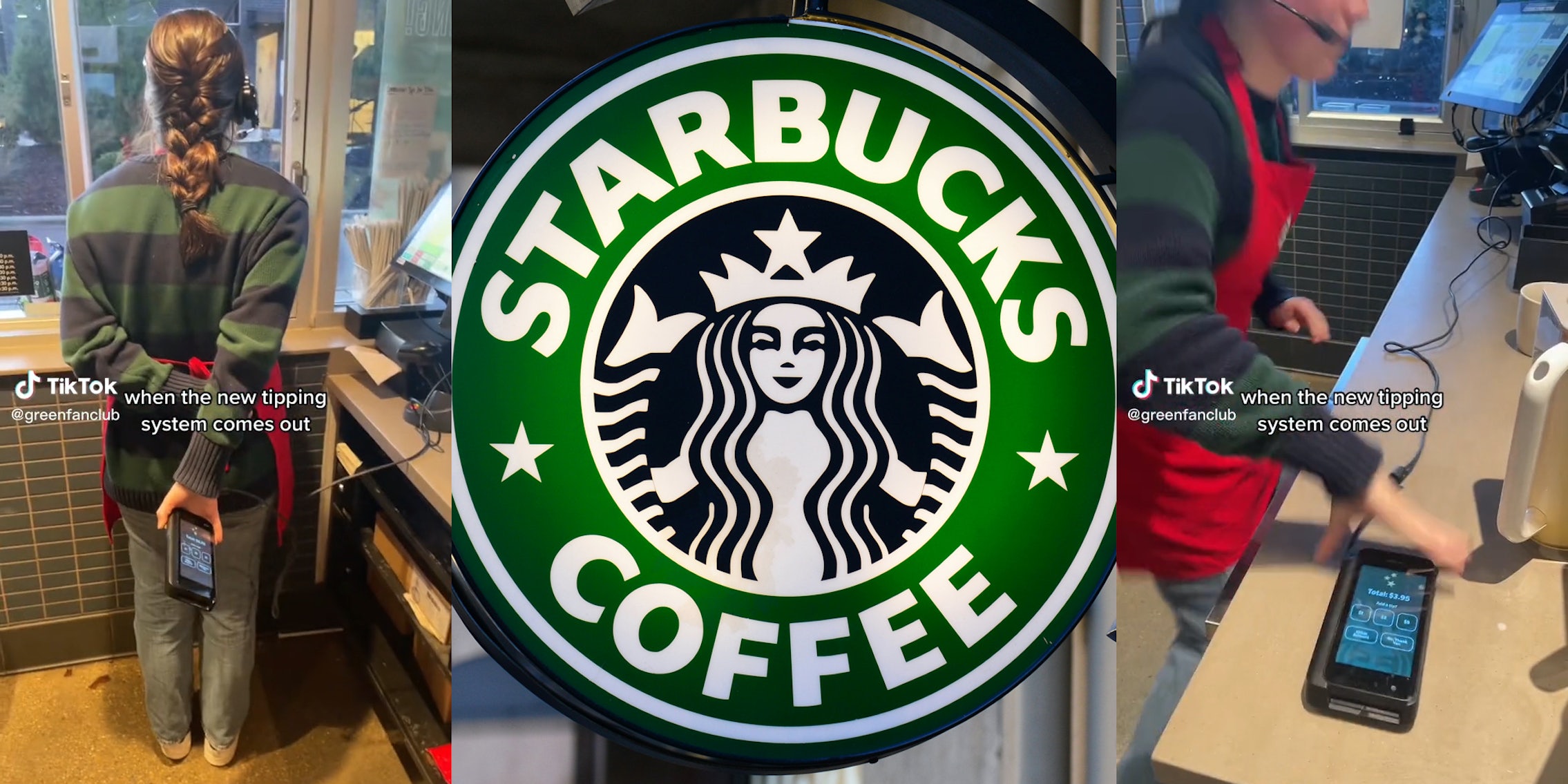 'Unfortunately we can’t [turn the option off] i wish we could.'

Recently, Starbucks rolled out a new tipping system that allows its workers to receive tips from credit and debit cards.

While the idea initially provoked mixed-to-positive reactions, the actual implementation has left a sour taste in some workers’ mouths.

Earlier in the month, a worker provoked discussion on TikTok after characterizing the system as unreliable and time-consuming, noting that customers have still not gotten used to the new system.

Now, another Starbucks worker is provoking discussion after pointing out another facet of the tipped system: It prompts users for tips after ordering through the drive-thru.

In a video with over 5.9 million views, TikToker Rylee (@greenfanclub) shows a series of embarrassed reactions while preparing to hand over the card reader to a customer.

In the comments section, she notes that “unfortunately we can’t [turn the option off] i wish we could.”

Many commenters claimed that Starbucks should simply pay their employees more rather than rely on customers for tips.

“Did Starbucks really add a tipping service?!?! They just need to pay their employees more via their ridiculously expensive products,” wrote one user.

“Companies are banking on us feeling awkward and tipping so they don’t have to pay employees properly,” added another. “HIT NO TIP!!!!!! Starbucks makes enough to pay u.”

“Instead of raising wages they’ll disrespect their workforce by subliminally suggesting that what they make is what they deserve in tip form,” shared a third.

Other commenters proclaimed that they would not use Starbucks’ tipping option.

“As a server, i’m destroying that no tip option,” offered a user.

“I’ve literally been pressing ‘no tip’ before giving them the card reader because i really dont want to ask them to tip,” alleged a second.

“This is very cool but i am slamming that no tip button after spending 3 paychecks for just a medium pink drink and a egg sausage cheddar sandwich,” explained a further TikToker.

That said, some were happy about the development of a tipping system for cards.

“I love tipping my baristas they are amazing!” exclaimed a commenter.

“IM SO GLAD BC EVERYTIME I GO TO STARBUCKS I WISH I COULD TIP YALL,” said an additional user.

Update 10:38am CT, Nov. 28: In an email to Daily Dot, Rylee shared her thoughts on the new tipping system.

“We don’t really have that many issues technological-wise, but it’s very awkward when we have to mention it,” she detailed. “Every time someone uses their credit card, this tipping system pops up before they can move on and actually pay. I’ve had some people be rude about it and think it’s ridiculous, others glad that we have the option in place.”

She went on to say that the reaction amongst store employees has been lukewarm.

“Overall, mixed feelings,” she summarized. “As baristas, me and my friends agree that holding out the entire pin pad out the window is super awkward for us, and on top of that makes people weirded out. Personally, it feels like we’re almost desperate-looking when we have to do this. We cannot touch the screen at all when this is up, so there’s no way around it. So, when people don’t know what it is or can’t see it, it gives this weird awkward moment of just staring back at each other until I get the angle right and they can see what’s going on. Explaining it sometimes doesn’t help, either.”

The Daily Dot reached out to Starbucks via email.