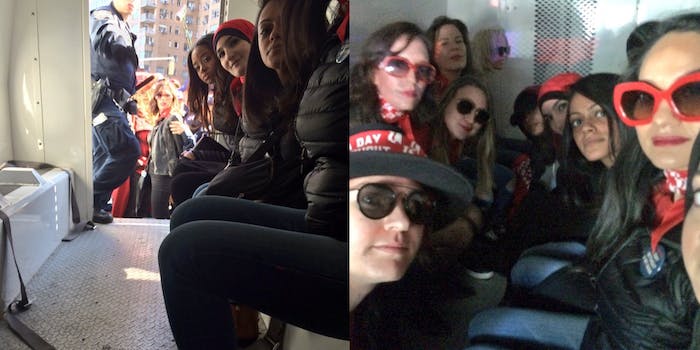 Around a dozen protesters were arrested during demonstrations in New York City.

Police arrested the leaders of the Women’s March movement and other protesters outside Trump International in New York City on Wednesday during a rally held on International Women’s Day.

In their fight for global women’s rights, Women’s March organizers had called for March 8 to be “A Day Without a Woman,” a nationwide strike that has led to thousands of women leaving work or school and entire school districts canceling class.

Even female lawmakers in Congress addressed the strike by staging a “walk out” on Wednesday afternoon and leading a rally in front of the Capitol. Among those who participated included House Minority Leader Nancy Pelosi (D-Calif.).

#InternationalWomensDay from Capitol Hill: Leader @NancyPelosi says the most important women's rights for her is R.E.S.P.E.C.T w/ equal pay. pic.twitter.com/Gkmz9ZG8ht

Women of the world: the @HouseDemocrats Congresswomen stand with you today & every day. #DayWithoutAWoman #InternationalWomensDay pic.twitter.com/WJL398IfIt

The Women’s March tweeted out a photo of the dozen or so protesters who were arrested by the NYPD outside of Trump International.

We are not sure what precinct we are being taken to at the moment. But we are together, reSisters. #DayWithoutAWoman pic.twitter.com/r10WBikdl8

It is unclear to what circumstances lead to the police arresting the protestors. According to tweets from A Plus reporter Issac Saul, NYPD arrived on the scene on Wednesday afternoon and demanded that the crowd gathered in front of Trump International disperse.

But the NYPD’s demands fell on deaf ears.

Saul reported that the NYPD gave several warnings to disperse. Sarsour and approximately a dozen who refused were arrested for disorderly conduct.

The Women’s March has not yet responded to a request for comment from the Daily Dot.

The arrest of the Women’s March organizers marks a dramatic departure from law enforcement’s prior treatment of the movement. Not a single person was arrested during the Women’s March on Washington or any of the hundreds of marches organized in cities across the nation and the world. Many felt the lack of arrests during the Women’s March bleakly contrasted with regular arrests and brutal treatment of protestors by police that came to be expected during the marches and rallies held by Black Lives Matter, immigrant rights groups, Standing Rock, and Occupy movements. Others weren’t surprised by the fact that no one was arrested during a permitted, peaceful march on the National Mall in Washington D.C., which occur on the nation’s capitol on a regular basis.

Jess Zimmerman noted in the New Republic the contrasts between the way the police treat a movement that has been characterized as largely for and by white women, despite the fact that a few of the Women’s March co-chairs are women of color.

“Bad behavior is enough to lead to arrests, but good behavior isn’t enough to avoid it,” Zimmerman wrote. “If the cops didn’t arrest anyone, it’s because they didn’t want to.”

Kara Brown of Jezebel attended the Women’s March in Los Angeles. She noticed a distinct difference in police presence:

“In downtown Los Angeles, the lack of police presence was conspicuous and angered me acutely. As many have noted, the mostly-white Women’s March garnered a completely different response from law enforcement than the more melanin-heavy demonstrations which promote with the exact same peaceful intentions. More frustrating were boasts about the lack of arrests on Saturday from people who somehow still don’t realize the color of your skin is often the primary determinant of how you’ll be treated by police.”