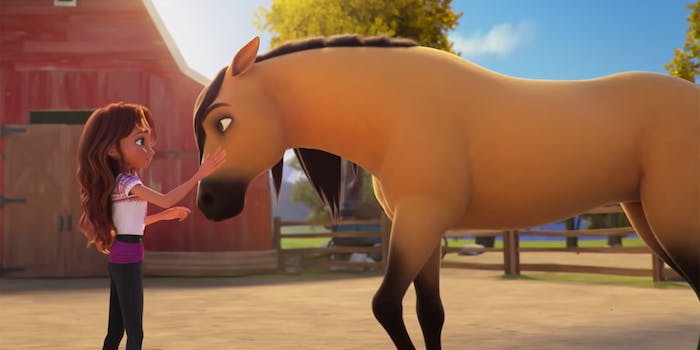 ‘They colonized Spirit’: Remake of beloved horse movie gets slammed for whitewashing

'Missed opportunity to represent Natives who so badly need representation in the media.'

Spirit Untamed is based on the Netflix television series Spirit Riding Free, which is based on the 2002 film Spirit: Stallion of the Cimarron. People online are calling out Spirit Untamed’s departure from the original film, which features Native Americans. One person described the new film as a “white American horse girl” movie, despite the protagonist being of Mexican descent.

“They colonized Spirit,” one user tweeted. “What a sad cash grab and missed opportunity to represent Natives who so badly need representation in the media.”

The 2002 film centers around a captured wild Mustang stallion, who is captured by wranglers and eventually set free by a Lakota Native American named Little Creek. After efforts by Little Creek to ride Spirit, the stallion is named “spirit who could not be broken” and is reunited with his herd at the end of the film.

Spirit Untamed, however, is about Lucky Prescott, the daughter of a horse-riding stunt performer from a frontier town. Prescott, an independent kid raised in an East Coast city, returns to her mom’s hometown where she meets a wild Mustang, Spirit. Prescott and her two friends set on a journey to rescue Spirit and his herd from wranglers.

People online blasted the characterization of Spirit, saying in the original movie he was portrayed as a wild, untamed horse—and is now a “freaking pet.”

“Original Spirit: A wild horse who refuses to submit to the colonizers trying to break him, and only accepting the friendship of a Native American who treats him as an equal deserving of freedom and nothing less,” one user tweeted. They showed “new spirit” as bowing to the protagonist.

Others pointed out that the director Elaine Bogan, the producer Karen Foster, and the scriptwriters are all white. “Need I say more…” one user tweeted.

Despite criticism of the film being a “white horse girl movie,” others clarified that the protagonist is half Mexican. Still, some said the depiction of her as Mexican was generic.

“They decided to make her slightly brown and to wear an embroidered shirt as a very lame and generic character design,” one user tweeted. “Even IF they wanted to make her Mexican, she could have at least been indigenous.”

Some childhood fans of the original film said they wish the movie was left alone.

“One of the few popular movies out there with a Native American main character and you had to white wash it,” Paige tweeted. “Spirit didn’t need to be touched. It’s a classic.”