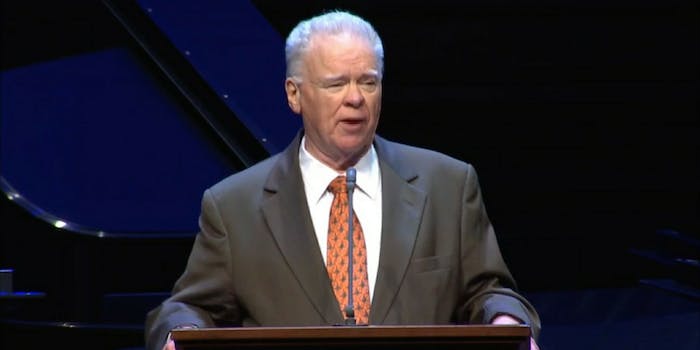 Paige Patterson told women to pray instead of leave their abusive husbands.

Thousands of members within the Southern Baptist Convention, the largest Protestant denomination in the country, are calling for the resignation of Southwestern Baptist Theological Seminary president and former denominational president, Paige Patterson. In sermons he gave between 2000 and 2014, Paterson, 75, commented on women’s bodies, including one teenage girl, and told women being abused by their husbands to pray instead of leave the marriage or file for divorce.

Nearly more than 2,500 people, primarily women, have signed a letter written to the Southwestern Baptist Theological Seminary board of trustees urging for the convention to “take a strong stand against unbiblical teaching regarding womanhood, sexuality, and domestic violence.”

“We cannot defend or support Dr. Patterson’s past remarks. No one should,” the letter reads. “The Southern Baptist Convention cannot allow the biblical view of leadership to be misused in such a way that a leader with an unbiblical view of authority, womanhood, and sexuality be allowed to continue in leadership.”

According to the Washington Post, calls for Patterson’s removal began less than two weeks ago, when a Baptist blog posted videos of a 2000 sermon during which he said he was “happy” a woman in an abusive marriage prayed and didn’t leave, getting more battered in the process, because her husband “heard her prayers.”

“He told a story about a woman who told him she was being abused by her husband. He told her to pray, and she came back with two black eyes. ‘She said: ‘I hope you’re happy,” Patterson recalled in the sermon. ‘And I said, ‘Yes…I’m very happy,'” because her husband had heard her prayers and come to church for the first time the next day.”

In a 2013 sermon, Patterson suggested women should not settle “a problem in your home” within the court system, and should “settle it within the church of God” because it could get in the way of a judge becoming a Christian.

Women have also focused on comments Patterson has made about women’s bodies, including his defense of a man who called a 16-year-old girl “built,” saying the man was “just being biblical.” In a 2010 address to seminary students, he said that “it shouldn’t be any wonder why some of you don’t get a second look” to female students who don’t make extra efforts to change their appearance.

Women calling for Patterson’s removal aren’t denouncing the denomination’s religious views on men and women having different roles, however. The women support the views of the church, and want to see leadership represent the “biblical message” of reverence for women, Carolyn McCulley, an author and one of the signers told the publication.

Since his 2000 sermon, Patterson said he would never recommend divorce, but advised on few occasions for women being abused by their husbands to leave them. Patterson has defended himself, telling the Post that he won’t step down and “can’t apologize for what [he] didn’t do wrong.”

The seminary’s trustee board is expected to determine Patterson’s future later this month, the Post reported.