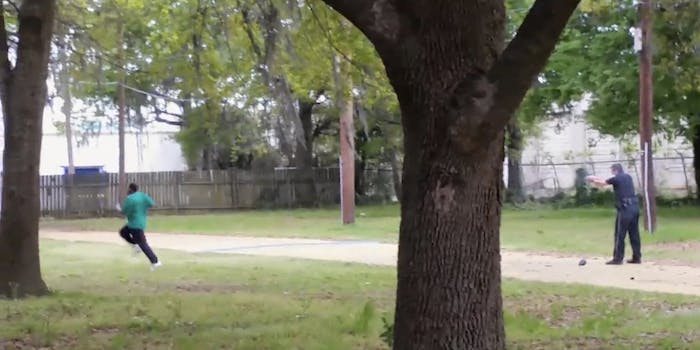 Warning: This is an extremely graphic video.

This article contains a video that is extremely graphic in nature.

A South Carolina police officer was arrested and charged with murder Tuesday after video surfaced that appears to show him repeatedly shooting a fleeing suspect in the back.

The video, which is extremely graphic, appears to show a white police officer firing multiple gunshots into the back of a fleeing black man, who then collapses to the ground. The officer then repeatedly yells “put your hands behind your back!” at his lifeless body. A second officer, who is black, comes in later in the video and examines the victim.

The officer, North Charleston Patrolman First Class Michael Slager, 33, had previously said that he’d stopped Walter Scott, 50, for having a broken taillight on his car. Slager claimed that Scott had taken his taser in an ensuing struggle, and that he had “felt threatened,” which led to his decision to shoot Scott, according to the South Carolina Post and Courier, which obtained the footage from an anonymous source.

In the video, Scott appears to have a wire trailing from his back when he runs, indicating he had been shot with a taser. After he collapses, Slager appears to pick something up from the ground and place something else down—possibly the stun gun.

Scott died on the scene, the Post and Courier reported.

The Internet has repeatedly erupted with outrage over white American police officers shooting unarmed or apparently unarmed black men, with apparently little consequence. This even includes seemingly open-and-shut cases, like that of Officer Daniel Pantaleo getting caught on video using a banned chokehold on Staten Island’s Eric Garner—who was unarmed and suspected of selling loose cigarettes—and was acquitted of all charges despite the incident being caught on video.