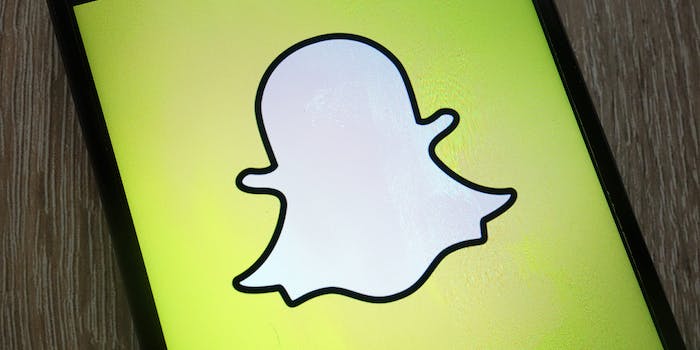 Police in a New Jersey town is reportedly investigating a girl for Snapchatting videos of her throwing her dog on a trampoline multiple times.

The video, shared on Snapchat and then re-shared on Facebook by one user Allie Torney, shows a short clip of numerous videos of her throwing two dogs (separately) on a trampoline. At least one of the dogs is seen trying to run away.

The first video is captioned “anddd their back.” The video was then shared on another user’s Snapchat, with the caption, “‘I would never hurt them intentionally the dog fell off my shoulder .. ‘ umm okay.”

It was then shared by Torney on Facebook on Tuesday and has since received 18,000 views.

“Make this go viral: poor dogs to think i work with someone like this,” she wrote in the description. “Absolutely disgusting.”

The alleged abuser has been identified as a 17-year-old by Heavy.com, though her name is not available. She reportedly claimed in a Facebook post that the dog fell off her shoulder onto a pile of laundry. She’s received messages on her Facebook page from people shaming her for her abuse, according to Heavy.com.

The Washington Township Police department is investigating the matter, according to Heavy.com. It is not clear if anyone else is being investigated. As can be seen in the video, at least one other person is involved in the abuse. The camera moves down and back up during the video, implying that it was being recorded by another person present at the scene.