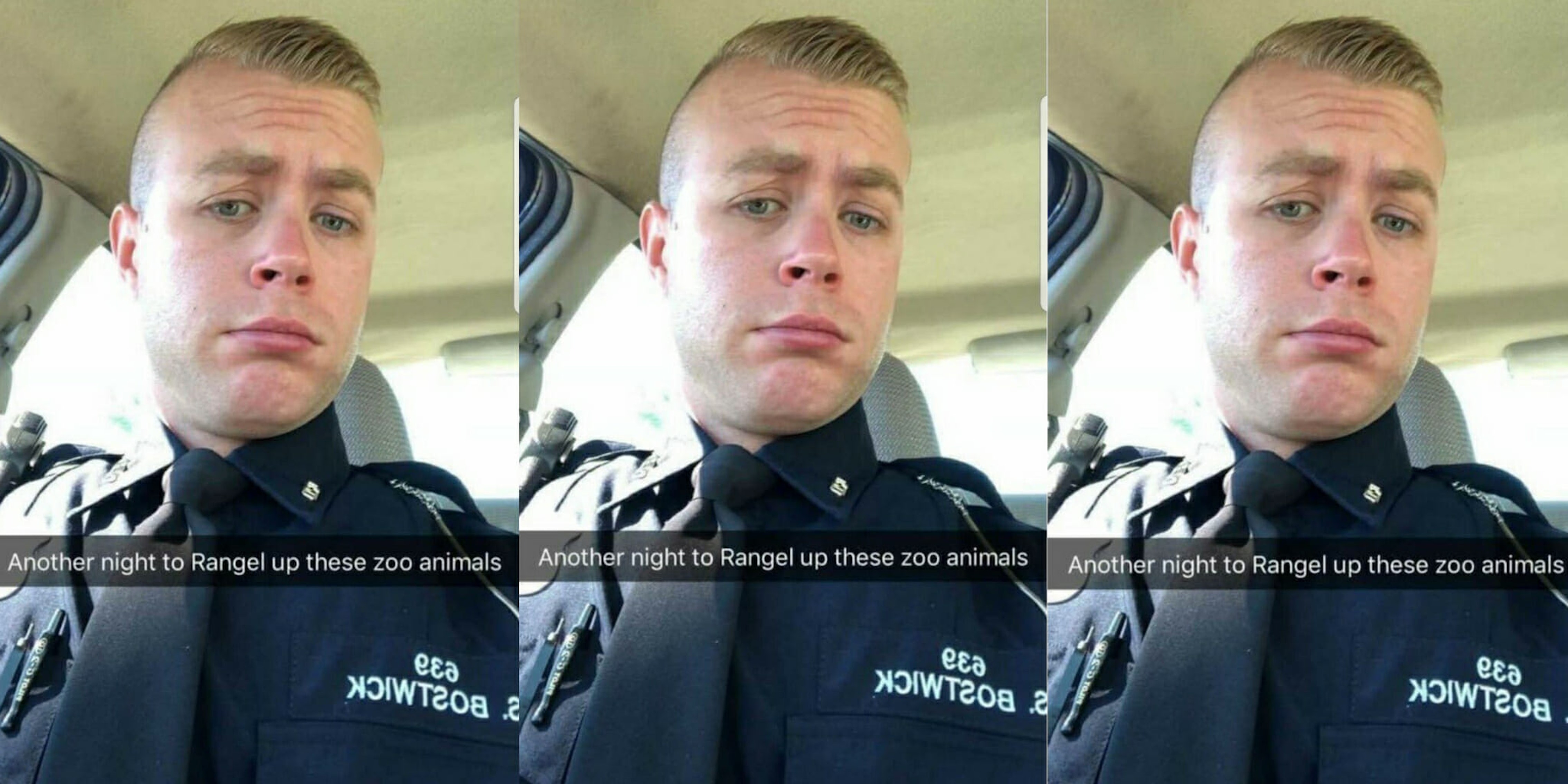 He wrote it was another night of wrangling 'up these zoo animals,' referring to the Detroit community he policed.

Never should law enforcement refer to the people they “protect and serve” as “zoo animals.” Especially, if they are playing into the centuries-old dehumanization of Black people. Thankfully, the Detroit police chief agrees and fired one of his rookie cops for doing such as a thing.

“If you feel that way, you’re not welcome here and we’re not going to have any tolerance for this kind of behavior,” Chief James Craig said on Monday.

According to Detroit News, 27-year-old officer Sean Bostwick, who is white, was fired on Monday after posting a Snapchat selfie the Saturday before, captioning the post that he was about to start “another night to rangel [sic] up these zoo animals.” In the Snapchat post, Bostwick is in uniform, sporting knitted eyebrows and a slightly duckface-ish lip pucker.

Detroit Police officer Sean Bostwick posted this on his social media. He was suspended from the job Sunday. He needs to be fired. Your top cop is black, you patrol a predominantly black neighborhood, in a city that is almost 85% black. Can’t have this on our force. pic.twitter.com/8W8SC4yyLn

Craig said he was shocked after receiving phone calls from other officers and community leaders notifying him of Bostwick’s post. Bostwick met with Craig and a union representative about the photo on Monday, and reportedly “expressed some remorse” and “took responsibility,” though Bostwick said he “didn’t mean it the way it came off.”

Presumably, Bostwick meant he would “wrangle up” (not “rangel up”) the “zoo animals,” likening Detroit’s more than 80 percent Black population to inhumane beings, and stripping them of their personhood. The analogy, regardless if they be zoo animals, wild animals, or otherwise, is frequently used to position the people the analogy is targeting (such as immigrants) as “less than human,” and therefore less deserving of empathy, respect, and justice.

Sometimes, the comparison is used as a “compliment” toward Black athletes, though it’s anything but. And often, more specified comparisons take the guesswork out of the analogy’s intention (if it was racist vs. not meant to be perceived as racist), such as when Roseanne Barr called former Obama aide Valerie Jarrett, a Black woman, an “ape”  on Twitter.

Serena Williams or American Pharoah: Who's the real sportsperson of 2015? Vote in our poll https://t.co/l4A51SPUlP pic.twitter.com/dssxaGFbAn

Bostwick was with the police force for 18 months but spent 16 of those months at the police academy. Craig said Bostwick’s probationary status allowed him to make “quick, decisive action” on the racist post, but that it would have been handled differently if the post came from a tenured officer. He said he hopes Bostwick doesn’t find his way back into law enforcement via another police department.

“I think any department that hires him will be concerned about this post,” Craig said. “I don’t think any city would want to take a chance or risk, but that’s between him and a potential employer.”