It's called Skunk, and it smells even worse than it sounds.

Imagine being soaked, head to toe, in a frothy mix of pureed compost, gangrenous human flesh, and road kill, and you might get some idea of what it’s like to be sprayed with Skunk, according to those who’ve had the misfortune of being doused.

Police departments in the United States have reportedly begun purchasing the spray, a non-lethal riot-control weapon concocted by an Israeli firm for use against demonstrators in the occupied West Bank. The sticky fluid, which Palestinians say smells like a “mixture of excrement, noxious gas and a decomposing donkey,” is usually fired from armored vehicles equipped using high-pressure water cannons.

“I don’t know what rotting flesh smells like, so I’m not sure, but to me, it doesn’t smell like feces.”

According to the BBC, a supply of Skunk was purchased by the St. Louis Metropolitan Police, a department that has faced numerous protests since the fatal shooting of 18-year-old Michael Brown in Ferguson, Missouri, last fall.

Mistral Security offers a number of delivery systems for Skunk, according to the company’s website, including 60 ounce canisters with a range of 40 feet; a “skid sprayer” equipped with a 50 gallon tank and a 5 hp motor that can shoot over 60 feet at up to 7 gallons per minute; and a 40mm grenade that can fired by a 12-gauge shotgun. 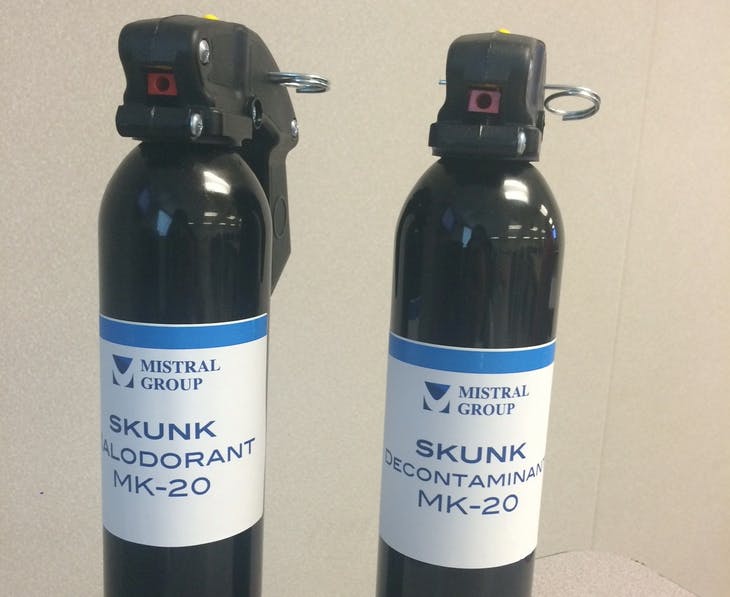 Odortec, the Israeli firm behind Skunk’s creation, describes the substance as made of “100 percent food-grade ingredients” and “eco-friendly—harmless to both nature and people.” This is one of the big selling points for Mistral Security.

“A lot of people have been calling it a chemical product, and the actually good thing about Skunk is that it is 100 percent organic—there’s no chemicals in there,” Banai said. “In its liquid form, it’s 100 percent non-lethal, as opposed to some of the other options law enforcement has that make a product less-lethal, which I think is a huge benefit, especially in today’s time with police brutality, to have a 100 percent non-lethal product at their disposal.”

During a 2008 interview, Wyre Davies, a veteran BBC correspondent, was told by an Israeli Defense Force superintendent that Skunk—reportedly a mix of yeast, baking powder, and some other “secret” ingredients—was safe enough to ingest.

“Reporters will sometimes go the ‘extra mile’ to add authenticity to their story,” Davies wrote, “but not this time. No way.” He described Skunk’s odor as an “overpowering mix of rotting meat, old socks that haven’t been washed for weeks—topped off with the pungent waft of an open sewer.”

It can take up to three days to get rid of that smell, Davies said, “no matter how often you try to scrub yourself clean.”

“A lot of it depends on the amount being sprayed,” Banai said. “If it’s sprayed in an outdoor location the problem will fix itself, so to speak. It is a liquid, so it vaporizes and goes in the air and goes away.” But if it gets on your body or in clothes, it can be a pain to remove, Banai admits. “You might have to wash your clothes two or three times, but it doesn’t stay forever.”

Asked to describe the odor, Banai said it smells “awful,” but that’s the point. “I read too that it smells like a mix of rotting flesh and feces. I don’t know what rotting flesh smells like, so I’m not sure, but to me, it doesn’t smell like feces.”