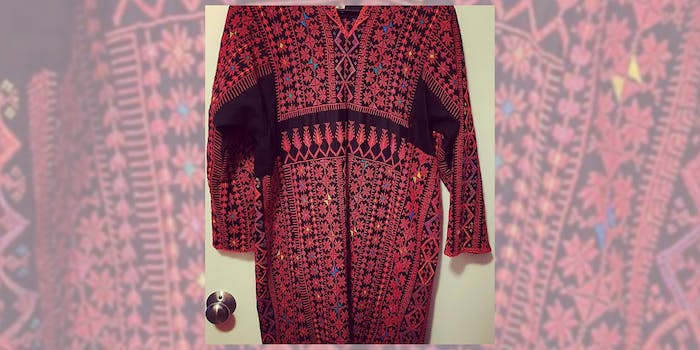 In what is probably one of the most anticipated swearing-in ceremonies in recent history, a record number of women and minorities are becoming official members of Congress today. Palestinian women, in particular, are celebrating on social media with a special homage to their heritage.

In solidarity with the first-ever Palestinian-American congresswoman, Rashida Tlaib (D-Mich.), who announced last month on Instagram that she was wearing a traditional Palestinian gown, women are sharing photos of their thobes on social media with #TweetYourThobe.

Sneak peek: This is what I am wearing when I am sworn into Congress. #PalestinianThobe #ForMyYama

Each thobe, traditional Palestinian clothing for women, has a specific tatreez embroidery design, which entails the stories of the woman’s heritage, hometown, and ancestry.

“It’s a form of art, it’s a form of expressing your relationship with the women who are your ancestors, with your mother, your grandmother,” Susan Muaddi Darraj, a Palestinian-American award-winning author and professor who started the #TweetYourThobe trend, told the Daily Dot. “A lot of people today are posting dresses that their great-great-grandmother stitched and designed, it’s a way of tracing that lineage.”

Very proud of @rashidatlaib who will be sworn in today as the first Palestinian American congresswoman. Rashida will be wearing a traditional Palestinian thobe during her swearing-in, which is an important part of our heritage and identity. #tweetyourthobe

#TweetYourThobe
Congress needs this many colors, this much quality, and this much history #RashidaTlaib pic.twitter.com/C1mWB5jkhD

Today @RashidaTlaib will be sworn into Congress wearing a Palestinian Thobe just like the one I’m dancing Dabkeh in below— count one young Palestinian woman with a lump in her throat thinking about how far our people have come. #TweetYourThobe pic.twitter.com/mZ0lxGBTgR

“I wanted to do something that would educate people about our culture,” Darraj said of creating the hashtag. “Also, the dresses are really imbued with symbolism and meaning because they’re often passed down from mother to daughter and they’re hand-stitched. They’re actually a form of artwork by Palestinian women.”

Darraj explained that every village in Palestine has its own particular style of throbe and women wear theirs in different colors according to their villages.

“If you look closely…there are particular symbols within each dress, you can see symbols from nature. [In] certain towns that are known for their orange, for example, the women will stitch the symbol of the orange into the dress. So you can look at a woman and you know where she’s from,” she says. “It’s a form of identity as well.”

To honor the tradition, many are sharing photos of their mothers and ancestors in their thobes, too.

.@RashidaTlaib Four generations of Palestinian-Americans have waited for your arrival. Welcome home. Welcome to the House! #TweetYourThobe #Palestinian pic.twitter.com/hR8WgolTHE

Good Morning and Congratulations @RashidaTlaib ❤️
This thobe, over 100 years old and from Beer ElSabe3, was a wedding gift from my mother-in-law. Yalla, #TweetYourThobe pic.twitter.com/bU6e4pKlZo

And then there are the adorable baby photos.

In honor of @RashidaTlaib, the first Palestinian-American elected to Congress, who is wearing a thobe (a traditional Palestinian dress) at the swear-in ceremony today, I’ll be tweeting pics of me in a thobe starting with baby me. #TweetyourThobe pic.twitter.com/7JjxacpX9v

Congratulations to Congresswoman #Rashida_Tlaib .
You are such a role modles to all the young American Paleatinian girls like mine.#Palestinian#Congress#tweetyourthobe pic.twitter.com/iIikKLblEX

When Darraj initially announced the campaign on Twitter a few weeks ago, she received some backlash. She even had to block people who were harassing her, and eventually moved the hashtag over to a private Facebook event over privacy concerns. The event had more than 7,000 invitees and close to 500 people “attending” as of Thursday afternoon.

However, by the swearing-in, numerous people were responding on Twitter in the way the hashtag was intended. Many were also posting in solidarity with the larger Palestinian community.

Wearing my tatreez shawl made by Palestinian women of Dheisheh Refugee Camp circa 2006 in solidarity with @RashidaTlaib as she is sworn in today #tweetyourthobe. Thanks @prwath for including me pic.twitter.com/Er1Je7GCGs

Just seeing her Twitter flooded with the traditional artwork has made it “one of the best days” of her life, says Darraj. “It just spread like wildfire. People are so excited to share their dresses. And we all have those dresses, so we kind of wanted to celebrate with [Tlaib].”

Tlaib herself was joined by some in thobes this morning.

With the first #Palestinian and Muslim Congresswoman @RashidaTlaib . We out here wearing our Palestinian thobes at the Swearing In, y’all. #tweetyourthobe pic.twitter.com/XcO1JUAYsM

“Being Palestinian American, we contribute to this country, we love this country, and to see a woman who is joining both her Palestinian heritage with her duty as an American congresswoman is going to be a terrific thing,” Darraj said. “I’m just so proud that she chose to wear that dress.”