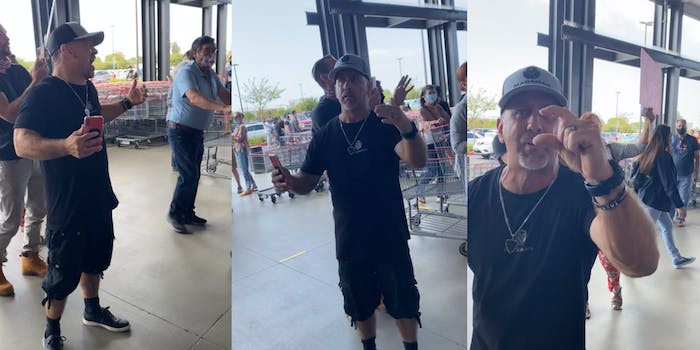 'Stop dictating my life because you're afraid.'

A viral Reddit video shows an anti-masker, male Karen talking big stuff outside of a Costco over wearing a mask. Online, the unidentified man is being mocked for his height.

Posted to Reddit’s r/PublicFreakout page by PoeBangangeron, the man is fruitlessly arguing with Costco employees about wearing a mask in their store. He is standing beside two fellow anti-maskers.

The video has received 8,200 upvotes and thousands of views since being posted on Monday.

“Stop dictating my life because you’re afraid,” he says while wearing cargo shorts. “If you feel the mask works for you, then why are you worried about me?”

Meanwhile, another man in colorful shorts, masked and inside, is yelling at the man about “how short” he is.

The anti-masker laughs, attempting to mock him, but then, he quickly turns right back toward the Costco employees.

Then the masked man yells, again, “Look at the short guy!”

Likewise resorting to low blows, the anti-masker shows the videographer, making hand gestures, and saying, “But his d*ck is this big.”

One redditor commented on the anti-masker: “You can’t have a civil discussion involving facts and logic with these stupid fucks, so the only recourse is to either ignore them, or do what my man did here and just dive straight into loud mockery of a completely irrelevant physical feature of the offender. Sure, it’s kind of childish, but so is railing against the ‘tyranny’ of being required to wear a piece of cloth over your faceholes during a pandemic, and as you can see, it completely knocked this idiot off his script and made him look like an even bigger asshole.”