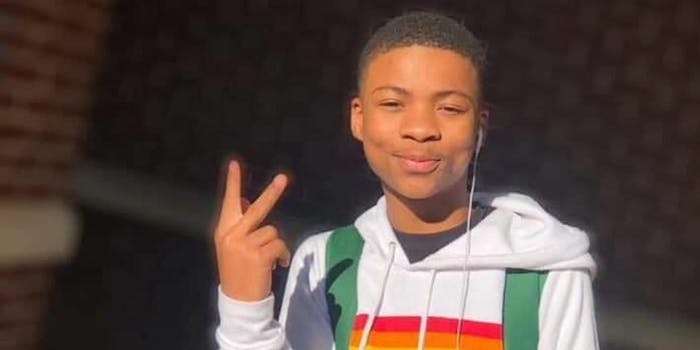 Nigel Shelby had been bullied for being gay.

A sheriff’s deputy in Alabama has been put on administrative leave for making homophobic comments on Facebook following the suicide of a gay teen.

Fifteen-year-old Nigel Shelby had been bullied in school for being gay and suffered from depression, according to his mother. His suicide on Thursday shook the community in Huntsville, Alabama, and sparked off a conversation about LGBTQ rights and bullying.

We are heartbroken over the death of Nigel Shelby, a 15 year old Freshman at Huntsville High School. Nigel took his life…

However, following Shelby’s death, Sheriff’s Deputy Jeff Graves made homophobic comments on a story shared by local news station WZDX Huntsville on Facebook. Even though they were eventually removed, screenshots remain.

“Liberty Guns Bible Trump BBQ. That’s my kind of LGBTQ,” he wrote on Sunday. He added that he was “seriously offended that there is such a thing as this movement” and that he had “a right to be offended and will always be offended by this fake movement.” (Over the weekend, a Kentucky-based BBQ food truck shared the same acronym and message while selling merchandise.)

His homophobic comments immediately received pushback and were shared on social media.

Jeff Graves is with the Madison Co. Sheriff’s office in Alabama. A 15 year old boy who’s gay committed suicide there. This sheriff decided to make his views clear. @mcsosheriffAL Anyone else want to let them know Jeff Graves is representing them so well? pic.twitter.com/5rOT44YWFe

Madison County Sheriff’s Office issued a statement on Facebook on Monday, acknowledging the complaints. “The Sheriff’s Office has assigned these allegations to be audited with the information that has been provided to us,” it read. “The public can be assured that a thorough and complete audit will be conducted to arrive at an appropriate conclusion.”

Many still want to see further action taken, saying it’s absolutely unacceptable for someone whom the public relies on for safety to have such hateful, extremist views.

“We all appreciate the departments [sic] swift action. Looking into these comments that he made should be taken very seriously,” wrote one user. “A person with such awful feelings toward a whole group of people should not be put into a place of power that could impact that said group of people.”

His mother, Camika Shelby, says Nigel was bullied in school for being gay and was also struggling with depression. Even though she knew of his mental health struggles, Camika was not aware of the extent of it, she told NBC, recalling her last conversation with her son the night he died. He had wished her the best for her work shift, which started at 3a.m. By the time she returned home from work at 6p.m., he had died by suicide.

A fundraiser set up to help Shelby’s mother with funeral costs has already exceeded its set goal, but donations are still welcome.

Bullying of LGBTQ children remains a concern that needs dire addressing in schools, as it’s comprised of many layers: Many Black LGBTQ children, like Shelby, face a combination of racist and homophobic bullying, which can significantly affect their school performance. Alabama remains one of the 24 states that don’t have any laws prohibiting bullying LGBTQ students.