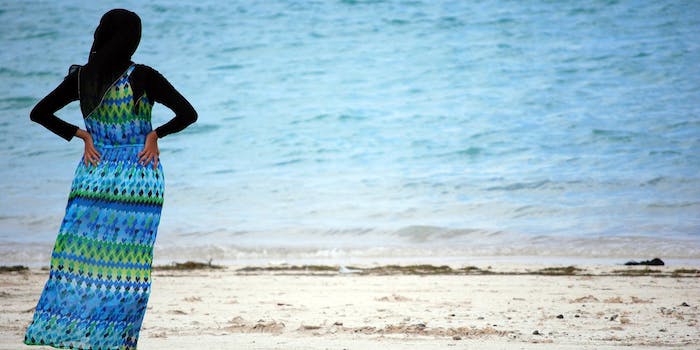 Should we be sharing the ‘burkini’-disrobing photos?

The photos shocked many, but could also retraumatize the victim.

Christian Estrosi, president of the Regional Council of Provence-Alpes-Côte d’Azur and deputy mayor of Nice, has threatened to sue anyone who shares photos of police in Nice forcing a Muslim woman to remove her coverings at a beach. He said the photos “provoke defamatory remarks and threats” against the police, which he won’t stand for.

In reaction to that, many are defending their rights to share the images, which have quickly made the rounds on social media. “Those pictures were shared because they expressed global outrage,” Yasser Louati, a civil rights activist, told the Verge. “So yes, I will definitely share them, and if he wants to sue me, be my guest.”

However, Estrosi may be right about the dangers of sharing the photos. He’s just wrong about who they could harm.

In our initial coverage of the “burkini” controversy, the Daily Dot embedded a tweet featuring the images in question. But as many have pointed out, sharing them could further traumatize the subject, who was already forced to remove her clothes in public.

@dinatokio the lady in those burkini pictures doesnt want them to shared all over the internet its an invasion of her privacy!!

Activist Hind Makki told the Daily Dot she had a similar trajectory when she first encountered the photos. “As soon as I saw the photos, I was outraged. I thought they needed to be seen, the fact that this woman was being forced by armed police officers to disrobe in a way that was very violent. If I had been in that position, I would have felt very violated by the police. So I did share those photos because I thought, ‘Can you believe this is actually happening?’”

However, after a few days, she began to think differently. “I thought, ‘Wait a minute, if I felt violated like this, I wouldn’t want other people to be sharing that photo.’ That’s when I decided that the story is out, people already know about it, and it doesn’t add anything for me to be sharing the photographs.”

Hadia Mubarak, a lecturer at the Department of Religious Studies at UNC Charlotte, said the photos helped to show the violence behind the laws in France. “There’s this assumption that the headscarf is merely culture,” she told the Daily Dot, and that if a woman is not legally required to wear one, she wouldn’t. “If a woman chooses to wear it, it’s a reflection of her commitment to God. That’s the primary motive for most women to cover, especially in societies where they’re not forced to wear it.”

However, Mubarak said the question of whether or not those photos should be shared is a nuanced one. “On one hand, it reflects the level of subjugation these women are going through because of their Muslim faith. Sharing it has the positive impact of bringing this to people’s attention. But also, the woman could find it offensive, or she might feel embarrassed.”

“I think that it was inevitable that the photos would be shared,” said Makki. Social media is an easily visual place, and many journalists and activists rely on violent or disturbing images to shock people into action. In fact, the story of the burkini laws may not have taken off without them. “We’ve been hearing stories of women getting fined and stopped by the police, but I don’t think the story found its legs until after the world saw these photos.”

Ultimately, people were going to see those photos. But Makki and Mubarak agree that more people need to see the forced disrobing of a woman on a beach for the violence, and violation of privacy, it is.