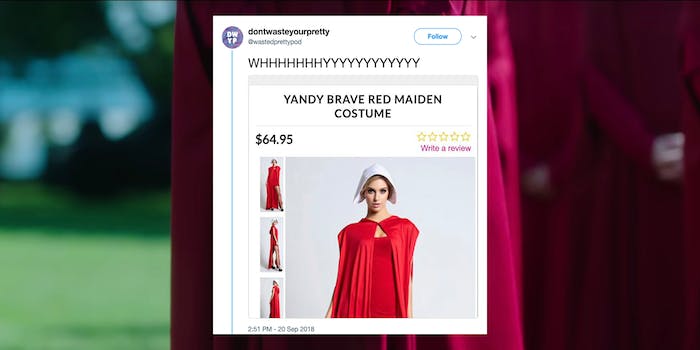 The Halloween costume, which referred to both the dystopian Margaret Atwood novel and Hulu series, was depicted as a bright red mini dress and cape with high heels. BuzzFeed News reported on the costume earlier Thursday, chronicling the Twitter responses that ranged from confusion to disgust.

Here’s part of the statement from Yandy:

Over the last few hours, it has become obvious that our “Yandy Brave Red Maiden Costume” is being seen as a symbol of women’s oppression, rather than an expression of women’s empowerment. This is unfortunate, as it was not our intention on any level. Our initial inspiration to create the piece was through witnessing its use in recent months as a powerful protest image.

The red cloaks and white bonnets worn by handmaids (aka the fertile women in the fictional Gilead who are subjected to ritualized rape and forced pregnancy) in The Handmaid’s Tale have been adopted as symbols of feminism. Most recently, women wore outfits inspired by the narrative to protest the confirmation of Supreme Court nominee Brett Kavanaugh.

But the “brave red maiden costume” was much more revealing. Here was Yandy’s original description of the costume:

An upsetting dystopian future has emerged where women no longer have a say. However, we say be bold and speak your mind in this exclusive Brave Red Maiden costume.

Some people on Twitter thought the execution of the costume was confusing, while many others found it completely appalling.

Wait. Is this…sexy handmaid? This is so far from the point I can't even.

WTF WHO THIUGHT THIS WAS A GOOD IDEA I JUST WANNA TALK https://t.co/DsHBarTujG

Of course, some people made jokes.

When you have a protest at the Capitol at 4 and happy hour plans at 5. https://t.co/gOZ9IEMVio

And still others had even found the silver lining.

The retail site seems to be erring on the side caution. Yandy’s statement said: “Given the sincere, heartfelt response, supported by numerous personal stories we’ve received, we are removing the costume from our site.”

Luckily, there are still plenty of other sexy costumes to choose from.