But how outraged should we be, really?

Last week, teachers at the Andrew Jackson Language Academy in Chicago held a presentation covering topics they’d be teaching in their sex ed curriculum, such as how to use female condoms and lube. While this sounds like pretty standard information for a sex ed curriculum, there was one small caveat: Andrew Jackson Language Academy is an elementary and middle school, and the presentation was intended for fifth-graders.

Unsurprisingly, parents at Andrew Jackson Language Academy are frothing at the mouth over the “objectionable” material in the curriculum, which included slides about lube and how to use condoms to increase female pleasure. One handout, for instance, featured a drawing of a woman lifting up her dress next to a smoking grill, with a caption reading: “Feel the heat! FCs [female condoms] adjust to your body temperature, so you and your partner can both feel the heat.”) 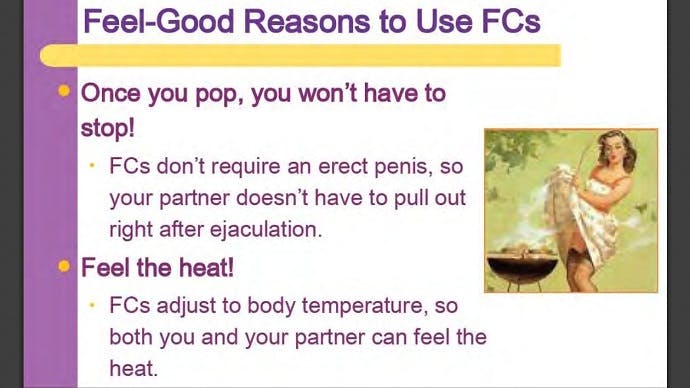 “The curriculum is appalling,” Local School Council chairwoman Angela Bryant told DNAinfo. “The language to me was the most offensive part initially. Pop and lube, lube lube, and those kind of things. … The content goes beyond what I feel is age-appropriate for a fifth-grader.”

Another AJLA parent, Rachel Gigliotti, agreed: “It definitely gets to an inappropriate level, things I wouldn’t even discuss in my own personal life. Sex with a condom, sex without a condom, sex with lube—things that no sixth grader should ever be exposed to.”

After Bryant and other AJLA parents publicly protested the sex ed curriculum, a spokesperson for Chicago Public Schools assured them that the information was, in fact, intended for older students, and had been included in the fifth-grade parental workshops in error:

“The objectionable material presented at Andrew Jackson Language Academy this week is not and never was part of the student sexual education curriculum,” CPS spokesman Bill McCaffrey said in a statement. “It was mistakenly downloaded and included in the parent presentation, and we agree with parents it is not appropriate for elementary school students.”

The outrage machine began churning anew, however, when another parent at Waters Elementary School spotted the same information on the school’s website, which was reportedly taught to students last spring. (While the slides have since been taken down from the website, the page for Waters’ health education curriculum clearly says parents are allowed to opt their children out of the course.)

Judging by the outraged parents’ comments to DNAInfo, it seems pretty apparent that they’re generally uncomfortable with talking about sex—not just with their children, but even among themselves.

No parent wants to think about their children having sex, least of all at the age of 10, 11, or 12. But the truth is, sexual experimentation at an extremely young age happens way more often than we’d think. According to a 2003 CDC report, 32 percent of teens had had sex by the time they were in ninth grade, meaning they’d lost their virginity before they were 14 or 15 years old. And a U.K. report has suggested that 3 percent of teens have lost their virginity at age 12 or younger—a relatively small number, but not small enough to say that it just doesn’t happen at all.

These numbers particularly apply to the students at Andrew Jackson Language Academy, a magnet school located in a lower-income neighborhood of Chicago. According to Dr. Stephanie Whyte, the chief officer of student health and wellness for Chicago public schools, 12 percent of Chicago public school students report having had sexual intercourse before the age of 13.

In light of these (frankly, terrifying) numbers, it seems that the outrage over Chicago’s public school sex education curriculum has been grossly misplaced. The question shouldn’t be whether fifth-graders need to know about how to put on condoms or the importance of using lube to increase pleasure and reduce the risk of injury. The question is: Why haven’t we been teaching kids about this to begin with?