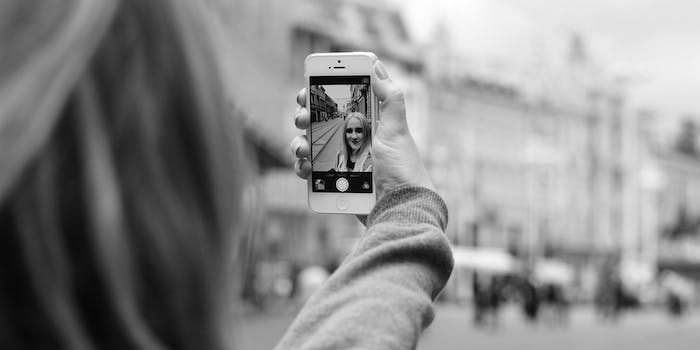 Photo via Passenger/Flickr (CC BY 2.0)

We have officially entered a selfie-violence epidemic

This time, a man shot his wife for posting one on Facebook.

Smartphones have clearly heralded a new world of dangers for their users, as this week we have entered a full-blown epidemic of selfie-related deaths and injuries.

Over the weekend, an Indian teenager fatally shot himself while taking a selfie with his father’s pistol to his head. Earlier today, a Washington man also accidentally fatally shot himself while posing with a gun. And now, a Texas man has turned himself in after being accused of injuring his wife and killing an armed bystander because his wife posted a “revealing” selfie on Facebook.

Quinisha Johnson told WFAA-8 that her husband, Ricci Bradden, disapproved of the selfie because it showed her cleavage. According to Johnson, they talked about it and she thought they had settled matters, until he showed up from his Army base in Fort Hood to her workplace at Walmart. “He was just saying I was tripping, and I wanted attention from other people, and attention from my husband just wasn’t enough,” she said. After the argument continued, Bradden pulled out a gun.

Anthony “T.J.” Antell, a bystander witnessing their dispute, reportedly retrieved a gun from his car, but was fatally shot by Bradden. Bradden also shot Johnson in the leg. He is currently being held on $500,000 bond, and a GoFundMe has been set up for Antell’s widow. Johnson is reportedly filing for divorce.

It’s worth saying that no matter what Johnson posted, even if it were a photo of herself completely naked standing next to three men she had cheated on him with, she does not deserve to be shot. And unlike what’s often believed, women’s selfies are not always an ultimate expression of vanity and sin and can instead be, you know, ways of expressing self-love and healing.