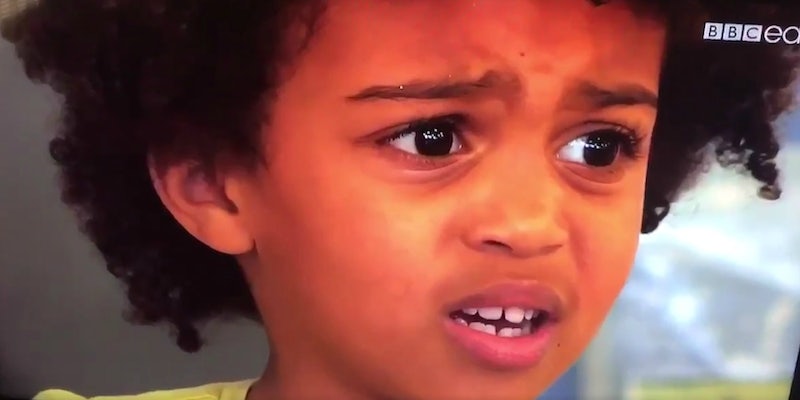 Skylar is all of us.

Sharing is a hard task when you’re a 4-year-old with a fistful of chocolate. And on this British TV show called The Secret Life of 4, 5 and 6 Year Olds, watch as this girl named Skylar tries to decide what to do when she discovers she has something everybody else in the room wants.

“Can you share the chocolate?” one cheeky girl immediately asks. “Do I have to? … It is mine,” Skylar responds.

Will Skylar succumb to the peer pressure? Will she do what’s right for her colleagues, or will she keep it all for herself? How will she handle the stress?

As you might imagine, it’s not a pretty ending.

These dynamics had me screaming pic.twitter.com/lfkwYnQAdZ

I bet you didn’t see that twist of the big bully coming through and just taking it, did you? Here’s it how it ends.

For those interested in how the rest played out pic.twitter.com/5n8cvMCQBY

This is actually a really interesting experiment and, the chocolate bar notwithstanding, mirrors what many of us experience on a daily basis. Should we share our good fortune? What should we do about the bully who sneaks in from outside? What can we do to help somebody who’s been wronged?

Either way, we all get the payout of watching Skylar tell the chocolate-stealer that she’s never going to share with him again.

Naturally, the internet was ripe to respond.

Can a black girl not eat her chocolate in peace? Haven't white people taken enough?!

. She'll remember it until she dies.

Remember, sharing is caring, and whatever Skylar lost in chocolate, she gained in respect and appreciation from her peers—and, most importantly, from adult strangers on social media.